Russia celebrates the founding of the Navy 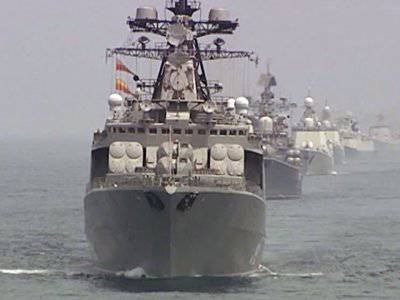 October 30 - the foundation day of the Russian fleet. On this day in 1696, the Boyar Duma, on the proposal of Peter the Great, adopted the decree: "To the sea ships - to be!". The first ships were already built at Voronezh shipyards. Over the next 30 years, the Baltic, Azov and Caspian fleets appeared. Russia has become a maritime power.


Portrait or landscape - for Peter Subbotin is not so important. On the search for the nature of time from the sailor a little. In the sea draws colleagues, on the shore - views from the deck. Before the demobilization, he, a teacher of fine arts from education, remains a month, and it was not possible to assemble the album with his comrades in pencil. “They ask a lot, send them home - to parents, girls,” says the artist.

The creative process once again interrupts the training alarm. Even while staying in the database, the concept of "day" or "night" on the ship is not. Teams for personnel on the speakerphone arrive around the clock.

This year, the sailors admit, they came out more than in the last few years. The fighting marathon began in Peter the Great Bay. The largest Russian-Chinese exercises involved 20 warships, a submarine and aviation. “Our successful joint actions have shown that the fleets of Russia and China are good neighbors, good friends and good partners,” said Dean Yu Ping, deputy commander of the Navy of the People’s Republic of China. “We are very pleased that reliable and well-coordinated work was achieved during the exercises.”

Hardly had time to replenish supplies after the exercise, the squadron of the Pacific Fleet moved to Sakhalin. During a surprise check of troops announced in July by Sergei Shoigu, squadrons of warships conducted missile firing at air targets there, and the naval landing force landed on an unequipped coast.

But the largest maneuvers were in Avachinsky Bay: 50 ships, 30 planes and 15 thousands of servicemen worked through the interaction for a month and a half. “The most difficult episode of the exercise is the unprecedented transfer of small anti-submarine ships to the shores of Chukotka,” commander of the Pacific Fleet, Sergei Avakyants, said. ".

Most sailors will not meet their professional holiday at home. Two units of the Pacific Fleet continue to perform combat missions in the Indian Ocean and the Mediterranean Sea. And on the eve three more ships left Vladivostok.

The large anti-submarine ship Admiral Vinogradov, the tanker Irkut and the tug Kolar will serve in the Asia-Pacific region. For two months, the detachment will visit Myanmar and go to the South Korean port of Pusan, where it will take part in the exhibition of marine equipment and weapons.

The sea borders of Russia are guarded by four fleets: the Baltic, the Black Sea, the Pacific, the Northern, and the Caspian Flotilla.

The oldest fleet is the Baltic: 1703 is considered the year of its foundation. Then, under the command of Peter the First, 30 boats with soldiers of the Preobrazhensky and Semenovsky regiments won their first military victory, seizing two Swedish warships at the mouth of the Neva. Now the Baltic Fleet includes a division of surface ships, a brigade of diesel submarines, formations of auxiliary, training, and search and rescue ships. And also - the Air Force, coastal troops, part of the rear, technical and special support. The main locations are Baltiysk and Kronstadt.

Peter the Great also founded the Caspian Flotilla - this was in 1722. Now its main base is Astrakhan. The flotilla consists of guard and small warships, minesweepers and boats.

History The Pacific Fleet dates back to the days of Anna Ioannovna. In 1731, by her decree, she established a flotilla with a base in Okhotsk, the first Russian naval unit in the Far East. It guarded fisheries and islands discovered by Russian pioneers. Now the tasks of the Pacific Fleet include maintaining the operational readiness of strategic nuclear forces, protecting the economic zone of Russia, and ensuring the safety of navigation. The compound includes strategic missile submarines, nuclear and diesel submarines, short-range and long-range surface ships, aviation and coastal forces. The headquarters of the fleet is located in Vladivostok.

The Black Sea Fleet was founded in 1783 year after the annexation of the Crimea to Russia. After the collapse of the Soviet Union, its main base, Sevastopol, turned out to be abroad, which does not prevent the fleet from carrying out combat missions. The Black Sea Fleet has a missile cruiser, anti-submarine ship, patrol boats, landing ships and submarines.

The youngest of the Russian fleets - the Northern, which appeared already under Soviet rule, in 1933 year. Now in the Northern Fleet is the only domestic aircraft carrier "Admiral Kuznetsov." And yet - missile cruisers, anti-submarine, amphibious ships, destroyers and minesweepers. The main base of the fleet is Severomorsk.

Ctrl Enter
Noticed oshЫbku Highlight text and press. Ctrl + Enter
We are
The founding day of the Navy of Russia. On the first pages of naval historyRussia demonstrated the most promising weapons at INDO Defense-2014
46 comments
Information
Dear reader, to leave comments on the publication, you must to register.