Turkey and America: found a scythe on a stone

October 29 2013
56
In recent years, there is tension between Ankara and Washington at any convenient and inconvenient occasion. For example, R.T. Erdogan considers Assad to be something between a killer and a butcher, but the United States is not at all eager to separate Democrat Syria with Tomahawks. Or take the Kurdish question: Ankara opposes the independence of this nation, which does not have its own statehood, and the White House does not really object to a free democratic Kurdistan. There are other differences: during the short war of Georgia with Russia 2008, the Turkish government did not support the US point of view on the conflict. Further, Ankara doesn’t have such warm relations with Tel Aviv that Israeli ally Washington would like. Finally, recently the Turks decided to arm themselves with twelve Chinese air defense missile systems - and not just Chinese, but those that are under US sanctions. In short, if you look at Turkey from the Oval Office, it will become clear: Turkey is not doing something wrong - it is doing something absolutely wrong. 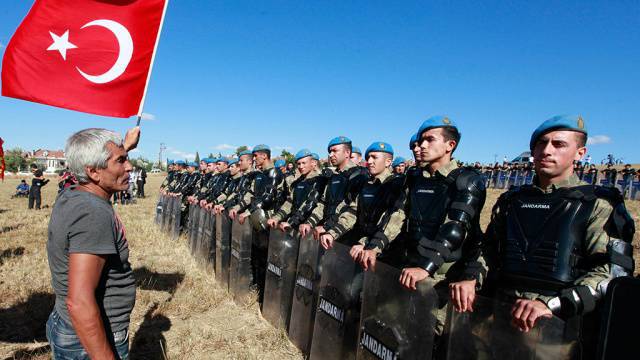 A month ago ARMS-TASSreferring to the weekly Janes Defense Weekly, the following message was transmitted from London. Implementing the national program for creating the T-Loramids air defense system, Turkey will cooperate with the China Precision Machinery Import Export Corporation (CPMIEC). US sanctions are in effect against the latter due to the violation of the ban on distribution weapons in Iran, North Korea and Syria. The decision to cooperate with the Chinese was made in Turkey on September 26 at a meeting of the executive committee of the subcommittee of the defense industry of Turkey, chaired by Erdogan.

It was reported that Turkey preferred the Chinese manufacturer to European and American competitors. LAW HQ-9 was cheaper. 12 HQ-9 launchers will cost Ankara about 3 billion dollars.

The American Patriot and the French SAMP / T from Eurosam competed with the Chinese HQ-9. The defense companies from Russia - with the С-300 air defense missile system were also a competitor of CPMIEC. The tender won the Chinese HQ-9 (international designation FD-2000), which is nothing more than a modified copy of the Russian C-300P. The Chinese took, as usual, the price: CPMIEC reduced the cost of its air defense system to 3 billion dollars, and the rest of the tender participants requested a little more than four billion. In addition, the Chinese have gathered to develop joint production in Turkey.

Thus, CPMIEC has bypassed Rosoboronexport, Raytheon Consortium-Lockheed Martin and the European company Eurosam. By the way, this tender has been going on for a long time - from the very year 2007. So the decision of Ankara rash or hasty can not be called.

Expert IA "REGNUM" David Arutyunov points out that the Chinese system is technologically probably inferior to both the American and Russian counterparts - all the more since it was largely developed on the basis of the Russian C-300 systems that were supplied to the PRC at the time.

The White House reacted negatively to Turkey’s decision. As the expert writes, referring to Today's Zaman, Washington is “very dissatisfied” with the Turkish decision. An unnamed source of the publication noted that Barack Obama raised this issue twice during meetings with the Prime Minister of Turkey, reminding him of the compatibility issues that would arise if a manufacturer was chosen from a non-NATO country.

NATO’s diplomatic sources, the analyst notes, have virtually eliminated the possibility of interaction between the bloc’s air defense systems deployed in Turkey and the Chinese complexes.

Washington's irritation was also caused by the fact that the CPMIEC in February 2013 was included in the US sanctions list for cooperation with Iran, Syria and the DPRK.

As for the benefits of cooperation with the Chinese, Today's Zaman allocates not only a billion dollars in price differences and attractive terms for technology transfer. Another Chinese advantage for Ankara was the possibility of new investments from the Celestial Empire within the framework of the deliveries of the said air defense missile systems. The fact is that the Chinese proposal envisages large investments in the creation of a technopark in Istanbul.

D. Arutyunov believes that Ankara’s decision on an anti-aircraft missile tender is the message of the signal not so much the United States as the EU. With the European Union, the Turks also have a serious cooling - due to protests about Gezi Park. The analyst quotes the words of Advisor to the Prime Minister of Turkey, Yigit Bulut, who called on Ankara to strive for leadership in the Middle East and Central Asia, as well as to “get rid of the scenarios of the European Union,” which will soon fall apart.

As for the Syrian issue mentioned above, Turkey, now distancing itself from the West, may take a more realistic position on Syria. According to the expert, Turkey’s foreign policy seems to be entering a “period of maneuvering between global and regional centers of power,” which is confirmed by the results of the tender for the air defense system.

With regard to technological consequences, it is not excluded the introduction of US restrictions on the transfer of military technology to Turkey. The penetration of Beijing in the military-industrial complex of Turkey worries the United States, the expert said.

Stanislav Borzyakov (newspaper "Sight") cites the words of the Turkish Deputy Prime Minister Bülent Arink, who noted that Turkey "has no obligations regarding the implementation of sanctions imposed by other countries", and "should make any decisions based on its own national interests."

Copying C-300 and various weapons in general, we add, the Chinese, too, are probably attributed to the normal way of doing business. Cooperation is such a military, yes ... But back to the topic.

In fact, with the tender is not all clear. The Chinese have not yet begun to cooperate with the Turks. S. Borzyakov notes that Abdullah Gul (the president of Turkey) said that signing a contract with CPMIEC is not planned in the near future and that this “company is just the leader of a short list of bidders in the tender”.

The president also noted that Turkey is a member of NATO and is obliged to take into account the interests of the alliance.

All this looks like a retreat before the diplomatic onslaught of Americans. Washington would like to supply Turkey with “Patriots”, load the work of its unemployed, fill the budget and at the same time preserve the compatibility of NATO systems.

But the president in Turkey is a nominal figure. His statement, the analyst writes, can be interpreted in favor of the “conspiracy version”. The Turkish side could have thrown information about winning the Chinese tender in order to follow the reaction and convince other players to lower the price of the air defense system.

One could agree with this, we note, if the Chinese did not offer Ankara the other favorable conditions listed above. In addition, none of the competitors of CPMIEC will not reduce the price of a billion dollars. Only the Chinese are able to operate with such values ​​downward. Erdogan’s disappointment that the White House avoided Assad’s bombing, and Assad skillfully played out the Kurdish map, is so great that Ankara's weather vane could well turn to Celestial. And indeed the last Asian news around Turkey are not limited to a tender for air defense system alone.

The other day at the summit in Minsk, Turkey asked for ... the Customs Union. And more specifically, the president of Kazakhstan proposed to take this country to the CU.

“The President of Turkey appealed to me with a request to join our Customs Union. Let us and we will accept Turkey ", - quotes the words of Nursultan Nazarbayev, said by him at a meeting of the Supreme Eurasian Economic Council, RIA News".

“Maybe Turkey will accept a big country and the conversation will end,” Nazarbayev suggested to the presidents of Russia and Belarus.

Turkey's entry into the vehicle, according to the Kazakh presidentIt would help once and for all stop the rumors that under the guise of the Customs Union is the revival of the USSR.

So, a sensation. It turns out that Turkey declared a new geopolitical vector - both at the summit in Minsk and in the case of the Chinese air defense system. This vector is definitely Asian. It is no coincidence that the very appeal to Nazarbayev.

Stanislav Tarasov ("Voice of Russia") rightly observes that the scoring of Ankara’s desire by President Nazarbayev right now is not accidental. After all, the EU recently announced its intention to resume talks on Turkey’s membership, so that, as stated by the participants of the Council of Permanent Representatives of 28 EU countries at a meeting in Luxembourg, "to push Turkey to build democracy."

And this, we add from ourselves, means that Europe is not so much inviting Ankara to the union, as long as it indicates Turkey how to behave and what to do. Push up

Recently, after the suppression of the protests in Ankara, the process of negotiations on the admission of Turkey to the EU was suspended. In response, Ankara made statements about its disappointment with Europe. It was also said that Turkey could use alternatives for integration, notes S. Tarasov.

And if Turkey is convinced that Europe does not want to see her as a full-fledged member of the union, she can quite seriously think about joining the CU.

Thus, the double Asiatic turn of Turkey (even if it is thrown into the media space “on trial”) should say a lot to both the European Union and the American administration, which is now pursuing a very weak policy in the Middle East.

There is another nuance that analysts and experts have not written about. The economies of China and Russia have long predicted that recession, recession, some sudden crisis, but in reality the situation is different now: the crisis does not eat the Middle Kingdom and not Moscow, but the West (including the NATO countries that have no more money). Russia and Turkey, Turkey and Kazakhstan are ready to increase mutual trade turnover, which was repeatedly stated at the highest level. You don’t need to talk about China: he is becoming one of the leaders of the world economy, and it would be foolish to ignore it. In addition, the pro-American course of Turkey has long been criticized at home Erdogan, and the prime minister, who is going to run for president, can not ignore this.

These are the geopolitical quirks we are seeing today in a changing world. Ankara will forcibly land and search the plane flying from Russia to Syria, otherwise it will be asked to go to the Customs Union ... It remains for her - for a couple with Qatar - to declare herself the bearer of the peacekeeping mission in Syria, and the media will again receive a reason for sensation.

Observed and commented on Oleg Chuvakin
- especially for topwar.ru
Ctrl Enter
Noticed oshЫbku Highlight text and press. Ctrl + Enter
We are
War in Turkish KurdistanTurkey against the Kurds. Is there a new phase of conflict ahead?
56 comments
Information
Dear reader, to leave comments on the publication, you must to register.