October 23 2013
30
The external differences between the Su-35 and Su-27 fighters are small: the keels of the first are shorter than those of the Su-27 (although there are more steering wheels), and there is less “sting” between the engine nacelles. On the new plane there is no large air brake, available in the Su-27, to reduce the speed it uses different angles of deflection of the rudders. A nose strut chassis has two wheels, instead of one from its predecessor. 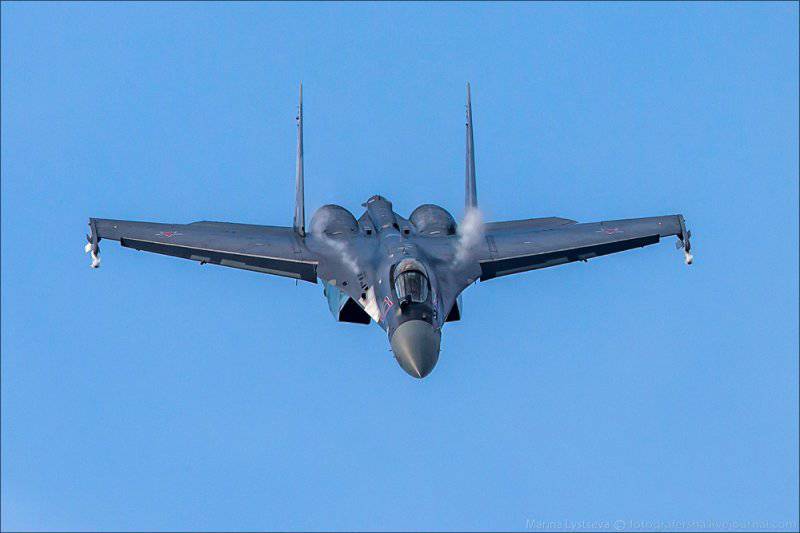 But inside the plane everything has changed a lot. It is equipped with two engines with variable thrust vectoring AL-41Ф1С (“product 117С”), with a pull at each afterburner in 142,2 kN, which is 16% more than Su-27. The new fighter is equipped with an auxiliary power unit TA14-130-35 to power its onboard systems. In its design used new materials. The fuel supply in 11,5 tons by 22% exceeds the volume of Su-27. Inside the cockpit, the pilot has an electronic flight control system consisting of two 380x290 mm multifunctional monitors MFI-35, as well as three small screens, and a display system on the windshield with a large IKSH-1M viewing angle. On the Su-35 mounted electrical remote control system with a fourfold redundancy. Oxygen is produced by an onboard generator, which avoids charging oxygen cylinders after each flight. Sukhoi Design Bureau also introduced a service form for many systems “by state”, as opposed to replacing them with resource indicators, which increases the maintainability of the fighter.

Major changes also affected the Su-35 onboard electronic systems. The main target detection system is Sh135, which consists of the Irbis H135 radar and the Khibiny electronic warfare system. Radar Н135 was developed NIIP them. Tikhomirov, and mass production is conducted at the Ryazan State Instrument Plant. The radar is a development of the НХNUMXМ “Bars” system, which is installed on board the Su-011MKI fighter jets, developed on the order of the Indian Air Force, and like its predecessor, the radar is equipped with a passive phased array antenna. The Irbis has several Barça modules, including a synchronization system, low- and ultra-high-frequency receivers, and a power amplifier. The original Indian PCBM, which stands on Bars, was replaced by Russian systems. Solo-30 is responsible for receiving the signal, and Solo-35.01 is responsible for information processing and radar control, instead of the Indian processors RC35.02 and RC1, standing in Barça.

Compared to Bars, Irbis uses a wider set of operating frequencies (thereby increasing resistance to interference), has a larger horizontal viewing angle +/- 125 °, an increased detection range and higher resolution. The radar can accompany up to 30 air targets, of which eight can be almost consistently accompanied with an accuracy sufficient for their simultaneous attack by medium-range air-to-air missiles with active seeker. Two targets can be fired at the same time with rockets from a semi-active GOS, and this requires the radar to highlight targets. In air-to-ground mode, the radar can detect four ground targets. The average output power is 5 kW, and peak power can reach 20 kW. This gives the radar the ability to use the “early warning” mode (limited by the 100 ° x100 ° sector), which allows detecting fighter targets at a distance of 350-400 km in the forward hemisphere, or up to 150 km when viewing the rear hemisphere. During normal search modes (covers the 300 ° x300 ° sector), the radar can detect fighters at a range of 200 km in the absence of clouds or 170 km in the viewing mode of the underlying surface. Radar "Irbis" can also classify targets ("large", "medium" or "small"), as well as sort them by type, for example, "helicopter", "cruise missile" or "fighter", comparing them with the memory library purposes.

The Khibiny-M EW complex is manufactured by the Kaluga Scientific Research Radio Engineering Institute. The complex consists of a reconnaissance unit that captures radiation from an air-based radar or air defense, as well as an electronic countermeasure unit. A part of the system operates at the most popular high frequencies (H and J waves) and is built into the airframe. If necessary, containers can be suspended on the Su-35, which enhance the capabilities of the system by adding the ability to operate on medium waves (from E to G). The Su-35 also has blocks for shooting traps HC-50 on 14 ammunition., Which are located on the “sting” in the rear part of the fuselage.

Optical-location station OLS-35 for Su-35 was developed by the Scientific-Production Corporation “Precision Instrument Engineering Systems” (NPK SPP). This is an unusual choice for Sukhoi design bureaus, which focused on the products of the Ural Optical-Mechanical Plant, installed on other types of design bureaus, including the T-50 fighter under development. OLS-35 has an infrared and electro-optical camera, which use a common optical unit, as well as a laser rangefinder and a target light. The system is mounted in the bow of the Su-35, its auto-tracking zone +/- 90 ° in azimuth, - 15 ° / + 60 ° in elevation. An air target of the size of a Su-30 can be detected at a distance of 90 km in the rear hemisphere or from 35 km in the front. OLS-35 can accompany four air targets at the same time, while not sending any signals that can warn them about exposure. The Su-35 pilot is also equipped with an on-target targeting system, although its type has not yet been made public.

SPK SPK also manufactures an air-to-ground sighting container for the Su-35, which is equipped with electro-optical, infrared and laser channels, as well as a laser target designator, which allows the fighter pilot to direct aviation weapons of destruction on targets highlighted by a third party. A container can accompany up to four ground targets at a time.

Su-35 is equipped with a more sophisticated airborne defense complex, also produced by SPK SEC. The infrared missile warning system consists of six sensors located in the front of the fuselage to provide a full coverage. The system can record the launch of MANPADS missiles at a distance of 10 km, air-to-air missiles - 30 km, and large surface-to-air missiles - from 50 km. Two sensors detecting laser irradiation are located on the sides in the nose of the fuselage. They can detect laser rangefinders at a distance of 30 km.

Su-35 will be able to use all types of tactical missiles that are in service with the Russian Air Force, or that will be adopted. For the first time, the guided missile was launched from the Su-35 27 July 2012. Although no details were made public on this launch, it appeared that it was an air-to-air missile of medium-range P-73. New types of missiles that are currently being introduced into production in Russia include the P-77-1 medium-range missile and the P-74М short-range missile. Subsequent versions, known as K-77M and K-74М2, are in development. It is believed that the Su-35 will also be able to use the K-37M long-range missile, which is currently being tested. Equipping the fighter with the K-100 rocket developed by the Novator Design Bureau, with which the aircraft was publicly exhibited, is not planned, and the development of the rocket has since been discontinued.

Of the air-to-surface missiles, the Su-35 can use X-31PM and X-58US anti-radar missiles, X-31АМ, X-35У and X-59МК anti-ship missiles, X-38М universal rocket with various GOS, as well as guided bombs caliber 250-, 500- and 1500 kg. 2005 advertising materials of the year contained information that Su-35 can be equipped with heavy anti-ship missiles Caliber-A and Yakhont.

The Su-35BM program was launched 10 years ago with the aim of producing an aircraft for export. It was funded solely by Sukhoi and its partners, the model of the new aircraft was shown at the Dubai Air Show 2003 in November. It was expected that the Su-35 would be ready in 2007, and it was viewed as a “transitional” type of fighter, allowing the company to save prior to the production of the 5 generation fighter PAK FA / T-50. But its prospects and the role within the company have radically changed compared to the original plans.

The requirement of the Russian Air Force to equip 30 squadrons, each of which should have X-NUMX T-12 fighters, is now considered as unattainable, primarily because of the cost of the fifth-generation fighter. If the Air Force wants to have 50 squadrons, they need a simpler and cheaper aircraft as a supplement to the T-30. The second aircraft must also meet the requirements of the Russian Air Force, including a range of 50 km, which excludes the possibility of purchasing a light fighter. The evolution of Russian plans affected the fate of the Su-3000, which was chosen as an addition to the T-35, and this paved the way for large domestic orders.

When UAC President Mikhail Pogosyan was recently asked about the future of the Su-35, he confirmed that he would be upgraded and produced for many years along with PAK FA as his cheaper alternative. Pogosyan refused to clarify the price difference between the two aircraft, but according to him, the fifth-generation fighter will “cost no more than 100 million dollars,” while Su-35 should be “cheaper to maintain competitiveness in the market.”

The concept of a mixed fleet of expensive / cheap aircraft led to the fact that in August 2009 of the Russian Air Force ordered 48 Su-35, which should be delivered to 2015, worth 1,4 billion rubles. (45 million dollars) each. The contract was followed by complaints from the aviation industry that the price of the aircraft was below its cost. In accordance with the State Armaments Program, another batch of 48 Su-35, which should be supplied in 2016-2020, will be ordered a little later.

Another six Su-35 were formally transferred to the Air Force in December 2012 and migrated to Akhtubinsk at the end of January (“06”, “07” and “08”) and mid-February (“09”, “10” and “11”) 2013 d. They were painted in dark gray camouflage with light gray undersides. Some of them should be sent to the center of combat use and training of flight personnel in Lipetsk.

Despite the success of the Su-35 in the domestic market, it has not yet entered service outside of Russia. He was offered to China since 2006, and China was considered by the manufacturer as a starting customer, but he showed no interest in new purchases of large batches of Su-27 variants (taking into account the start of production of its own, unlicensed versions of Su-27). Instead, the Chinese wanted to buy a small batch of aircraft - four or six cars, or even some of the systems installed on them, for example, the Irbis radar or the AL-41FS engines. The Russian side said it was ready to sell at least 48 aircraft to China.

China’s interest in the aircraft was considered lost until 25 in March 2013, when it became aware of the signing of a contract for the supply of 24 aircraft to the PRC. This surprised the Russian side, which stated that only the “framework agreement” for the supply of fighters was signed. First news about the contract appeared in the Chinese media, while information about previous deliveries of Su fighters to China usually came from Russian sources. It is possible that with the help of such a leak, China is trying to put pressure on Russia by insisting on selling 24, and not 48 aircraft.

Negotiations with Libya for the supply of 12 Su-35 reached an advanced stage in 2009, when the fighter was introduced to the Libyan delegation. But the regime change in the country has reduced the chances of a contract. Su-35 was also excluded from the Brazilian tender for the purchase of a new multi-purpose fighter.

In 2013, the city of Sukhoi and UAC intensified efforts to sell Su-35 for export. According to their representatives, negotiations are underway with representatives of 10 countries, and the appearance of the aircraft at the Farnborough air show can be considered as the beginning of a new international marketing campaign.

Ctrl Enter
Noticed oshЫbku Highlight text and press. Ctrl + Enter
We are
Lessons MAX-2015Situational analysis of the death of the MH17 flight (Malaysian Boeing 777), made on the basis of engineering analysis from 15.08.2014
30 comments
Information
Dear reader, to leave comments on the publication, you must to register.