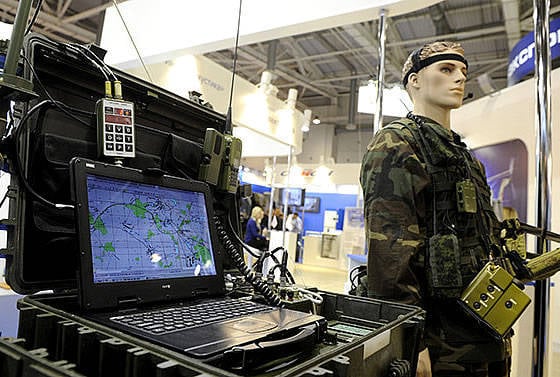 In Moscow, on the territory of the All-Russian Exhibition Center (VVC), the XVII International Exhibition of State Security Means “Interpolitech-2013” began its work.


The exhibition is organized by the Ministry of Internal Affairs, the FSB and the FSMTC of Russia. The total exposure area is 25500 square. m

The Ministry of Internal Affairs of Russia regards the Interpolitech International Exhibition of State Security Means as the main exhibition held in the interests of the law enforcement agencies of the Russian Federation, is its organizer and regular participant.

The special interest of law enforcement agencies in this exhibition is connected, among other things, with the exacerbation of the criminogenic situation in Russia. This is, first of all, a sharp increase in ethnic crime, due to the extreme neglect of migration policy. The uncontrolled migration has led to an increase in the flow of drugs to Russia, the formation of mono-ethnic enclaves in large cities, where their own rules for dormitory have been established. Another threat to the security of the state, also related to the problem of migration, is the terrorist attacks, the last of which occurred in Volgograd. These long overdue problems need to be addressed comprehensively, both at the political level and by equipping law enforcement agencies with modern weapons, instruments and equipment.

The problem with migrants is typical not only for Russia, but also for the absolute majority of Western European countries and the United States, where the authorities face the same problems.

Russia has developed a large number of modern systems belonging to the category of state security. Therefore, we can definitely expect an increase in orders from both Russian security agencies and an increase in the export of these systems to equip law enforcement agencies in other countries.

According to the press service of the Russian special exporter, at Interpolitex-2013, representatives of Rosoboronexport will take part in a round table on topical issues of foreign trade activities in the interests of law enforcement.

Representatives of Rosoboronexport will make presentations on the state and global trends in the development of special technical equipment and special equipment. weapons. There will also be discussed the development, export and import of specific types of special technical means. According to the results of the round table, it is planned to develop practical recommendations for improving foreign trade activities in the interests of law enforcement agencies.

The round table will be held on the opening day of the exhibition, October 22, from 15.00 to 18.00, pavilion No. 75, conference room No. 208. Of course, in terms of assessing the export prospects of Russian special technical equipment, this event will be one of the key events of the exhibition.

It is noteworthy that the FSMTC of Russia is expected to visit the exhibition by delegations from 34 states.

The scale of the exhibition can be judged by the fact that only enterprises that are part of Rostec State Corporation will present at Interpolitech-2013 more advanced 200 developments in the field of armaments and means of protection that are currently in demand in the Russian and world markets.

The largest exhibition of state security equipment in Russia is a unique congress and exhibition event with federal status and importance. It is held to provide manufacturers, suppliers and consumers of modern special technical equipment and weapons with an effective tool for solving a whole range of advertising and marketing tasks, monitoring the market and making trade deals. The results of this work are directly related to the formation of orders (first of all, state orders) and the implementation of a number of federal targeted programs.

According to Russian Prime Minister Dmitry Medvedev, “during its existence, the International Exhibition of State Security Means“ Interpolitech ”, as well as the International Specialized Exhibition“ Border ”, have gained deserved authority and recognition from specialists.”

In turn, in a welcoming speech to the exhibitors, the Minister of Internal Affairs of the Russian Federation, Vladimir Kolokoltsev, emphasized that “the goal of any state is to ensure respect for law and order, reliable protection of the constitutional rights and freedoms of citizens, their life and health. Creating an effective system of measures for the successful implementation of this task requires the consolidation of the efforts of all law enforcement agencies, scientific structures and industrial enterprises. It is in it that I see one of the main purposes of the Interpolitex exhibition.

The XVII Interpolitex-2013 state security exhibition will be held from 22 to 25 in October in Moscow on the territory of the All-Russian Exhibition Center in accordance with the decree of the Government of the Russian Federation No. 28-X on July 2011 of July.

The operational and combat capabilities of armaments and military equipment of defense industry enterprises and demonstration tactical and special exercises of special units of the Interior Troops of the Ministry of Internal Affairs of Russia will be held at the test site of the FKP “Research Institute Geodesy” (Krasnoarmeysk, Moscow Region) 26 October.

In compiling the material used by the press service of the Organizing Committee of the exhibition "Interpolitex-2013".

Ctrl Enter
Noticed oshЫbku Highlight text and press. Ctrl + Enter
We are
The action “Military service under the contract is your choice!” In Rostov-on-Don: future contract servicemen, exhibitions and “Russian Knights”In Moscow, the exhibition "Interpolitech-2014"
6 comments
Information
Dear reader, to leave comments on the publication, you must to register.