October 22 2013
9
In the course of the press tour at the TsNLI Central Research Institute, I was able to talk with Oleg Yakovlev, advisor to the company's general director. An interview with him is offered to your attention below.

The Central Research Institute "CYCLONE" was established in June 1961 of the year as part of the Ministry of Electronic Industry of the USSR. Today, it is the only certified in Russia developer and manufacturer of uncooled thermal imagers and technical vision systems based on them.

Central Research Institute Tsiklon OJSC is a part of Russian Electronics OJSC, the largest industry holding company based on 74 enterprises and 15 research institutes. Russian Electronics OJSC is a part of the Russian Technologies State Corporation.
At present, TsNLI Central Research Institute is carrying out large-scale work in the field of creation and production of modern optical-electronic systems and instruments.

- What are the volumes of purchases of your products by government customers?

- The Ministry of Defense for one of the special forces acquired the 160 “Shahin” thermal imaging sights. The first batch was delivered in 2007, in 2011, another 150 was supplied. The Interior Ministry has not yet acquired them. Sychy and Osprey were commissioned by the border service, they were accepted for supply. Delivered under the 2 thousands of devices from the 2004 of the year. Sych-3-CU has acquired the order of 100 kits, especially the internal troops like it.

- Question on the portable thermal imaging system "Sych-3-CU". How do the military relate to the symbiosis of its rangefinder, navigator and thermal imager?

- In some requirements, the military say that the navigator must be part of a complex with a target designator and a rangefinder. For example, I believe that this is not necessary. If the group works individually, then where they themselves are, they already know. They just need the coordinates of the target and the range, roughly speaking. If we are talking about the system "Warrior", then there is a navigator. Why else to overload the device?
For the internal troops, we are doing three-in-one complexes, cooperating with the ICB Compass. It is more convenient for them (BB. - author's note): he unbuckled it from the thermal imager during the day - you work with a range finder, at night you buckled up - you work at night, you attach the NPI or ZKPK - you received the coordinates.

- What is the reason for using a range finder from Vectronix in Sycha?

“We didn’t find a Russian range finder at one time that can replace Vectronix. Moreover, we are the official representative of this manufacturer in our country. Not only is it a very reliable manufacturer, its range finders are also very convenient because they are delivered both in finished form and in the form of modules that can be embedded in our products.

- How does the state customer relate to the presence of a foreign-made rangefinder?

- Understanding. Unfortunately, while with the Russian counterparts the situation ...

- Did you have to compare domestic devices with similar Western ones? Maybe there, special services help to get any copy?

- Um (smiles). I used to work in the USA, I regularly attend exhibitions there, I saw it all. They have nothing supernatural, they have a lot in common, that they have, that we have. Especially you can not hide anything.

- Microbolometers in your devices of foreign manufacture?

- At the moment, microbolometers produce 4 countries in the world: USA, founders, France, Israel and Japan. The Japanese do not sell bolometers, with Israel, let's say, there are some problems, therefore, we mainly use French (ULIS).
Now at our enterprise we are preparing a factory for the production of domestic microbolometers. Two years later, at the end of 2015, we plan to release the first samples of our own design. The main difficulty here is in the layout of the production line, because Not all equipment can be easily purchased; in the West, they are in no hurry to sell us the latest innovations. It’s not a trivial task to put together Korean, German, Japanese equipment into a single technological process. From here and long terms.

- How are state tests being advanced?

- The sight completely passed the state tests in the area of ​​the Ministry of Internal Affairs, in fact, we did it at their request. We prepared according to the customer’s specifications, but at our own expense.

- What is the range of recognition of the human growth figure?

- If this is the sight used on the rifle weapons type AK, then 800 meters. Sight in the version for large-caliber weapons - 1200 meters. According to the domestic method, recognition is counted if it is seen how a person raises his hands alternately. Americans just need to see a person in motion.

- What batteries are used in the sight?

- Especially for a set of combat equipment "Warrior", we added the ability to use both CR123 batteries and standard AA. Also on all sights provides a portable power supply. 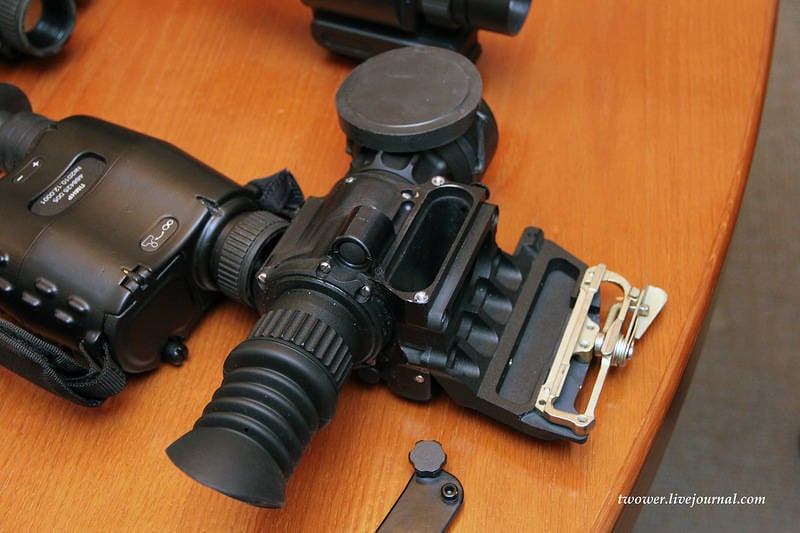 - What is the autonomous operating time of the sight? Usually our manufacturer has a sore point ...

- This is not the manufacturer of the device sore point, and the manufacturer of the battery. Today, on the CR123-x, we provide up to 7 hours of continuous operation. Under normal conditions. On AA batteries - somewhere 4-5 hours. According to the TK, by the way, 4 hours should under normal conditions. With a minus 40, the running time on the CR123's is approximately one hour. At the same time, according to the test technology, the device lies two hours off at this temperature, then after switching it on it should work the same minus 40 for another hour.

Photo of the module under the battery size AA 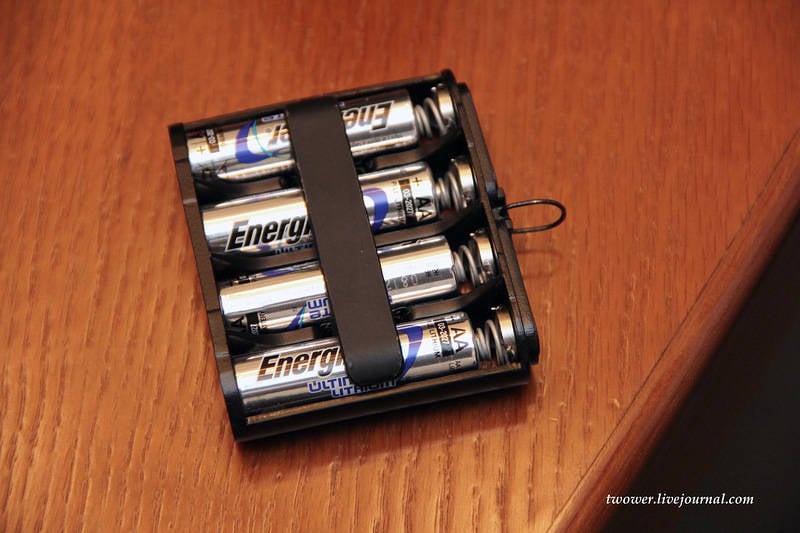 - What is the weight of “Шахahin” used on small arms?

- What makes it so heavy?

- Due to the hull. American sights are made of cast, magnesium-aluminum alloy. We have no problems to do them, just like what we know. But this technology can be implemented only in mass production, otherwise the sights in the literal sense of gold will come out. We still have small, or even single orders.

- Tell us about the helmet mounted monitor that comes with the “Warrior”. 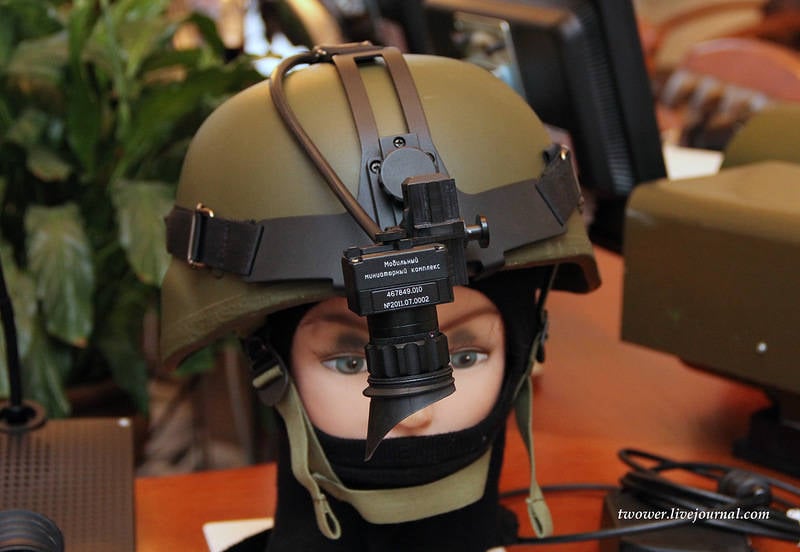 Mobile miniature complex, he is a helmet-mounted monitor

- Helmet-mounted monitor built on organic light-emitting diodes. This is one of the most advanced technologies. it gives a very high brightness and, in contrast to the LCD operating up to 0 degrees, this one maintains operation up to minus 60 degrees. We are now running a line, and now we will do OLED microdisplays ourselves. In addition to the display, all the rest of the electronics in it are Russian-made. 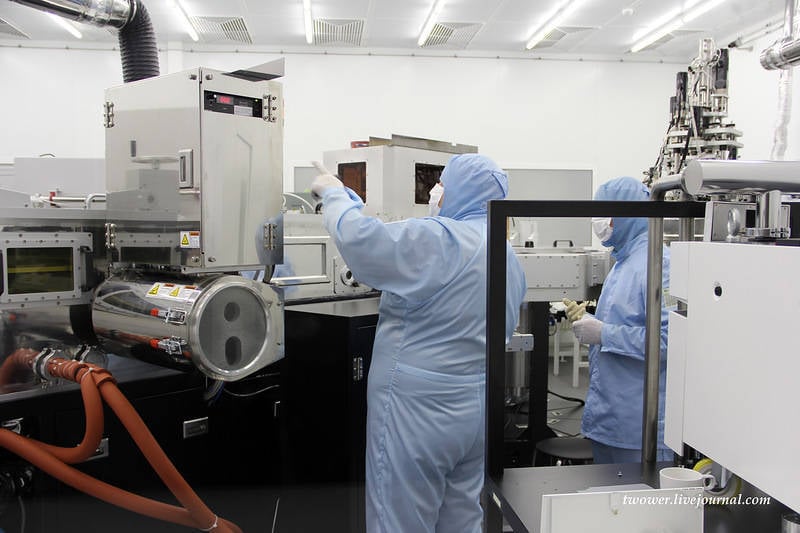 This monitor serves as a display tool to which you can connect both night and thermal sights. Using such a connection, you can, for example, conduct shooting from around the corner. In the “Warrior” kit, you can display information from a tablet computer on a monitor, for example, when in certain conditions, at night, it is not advisable for you to identify yourself with the tablet or handheld backlight on.

- It seems to have previously used a monitor from Roskwell Collins, regularly flashed at exhibitions?

- No, Roscwell Collins, 135, was used as a model on the Sagittarius, and there was only a body from it.

- Are there any new trends in this area?

- Yes, we now have the OCD "Display" is over, by the end of the month there will already be a prototype: the removal of the image on the visor assault helmets. We use special light guns, special glass processing that allows you to see everything calmly through the visor, plus it does not glow when displaying information.

- Do you work with wireless technologies for helmet monitors, sights?

- We do not specifically deal with them. For the Ministry of Emergency Situations did similar things. Regarding the military ... The fact is that the West has not yet decided on this issue. Bluetooth, Wi-Fi ... On the battlefield, these are the same frequencies that EW can suppress. Our military so far express only cautious wishes on this score.

- Why in the complete set "Warrior" devices of night vision are not visible?

- Our Ministry of Defense was against the fact that in the face of a soldier something, so to speak, hung: closes the review, heavy. It did not suit the military. For the Ministry of Emergency Situations, we first did fixing the night-vision device from the front on the top of the helmet, but the firemen explained to us that it was so inconvenient that a person would try on the entrance to the premises on the level of the head, therefore, they say, we will surely demolish it by hooking something. Now we have two options: in front on the mountings of the helmet-mounted monitor (the monitor is removed), or on the right side (on the helmets from the Armak with the Picatinny rail) with the transfer of the picture to the monitor. 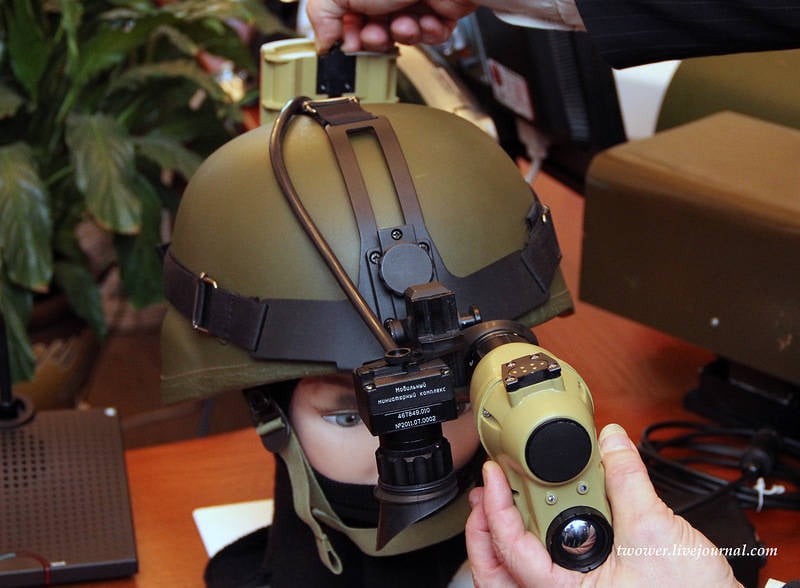 Night vision device "Gerbnik", a demonstration of the possibility of mounting in front

In general, with the advent of such modern tools, the need arises to set the correct technical specifications. And with this, alas, problems. Our armed forces have no experience in conducting combat operations using modern observation devices. We have a poorly installed trial operation system. Technical specifications are given not by those who run through the fields with our devices, but by people from the office silence.

- The creators of the "Warrior" working together on a set?

- Yes, we work in cooperation with other manufacturers involved in this ROC. For example, a prerequisite for us was the conjugation of all the equipment produced within the framework of the “Warrior” with the KRUS “Strelets”.

- When will the Warrior be ready?

- Unknown. On our part of the work of PI passed, we have eliminated the comments. But there is no further clarity. Here, after all, the system of the GOST requirements is very heavy. For example, in the sight should be diopter adjustment +/- 5 diopter. But where in the army you will find a sniper with a vision -5? Or, for example, devices must withstand transportation in the unsealed compartments of aircraft at an altitude of 12 thousands of meters. Unsealed only An-12, but it flies much lower. The same IL-76 is already sealed. And this creates additional problems for us: pay for lifting to such a height, additional requirements for hull strength, etc.

Ctrl Enter
Noticed oshЫbku Highlight text and press. Ctrl + Enter
We are
List of destroyed the largest and most high-tech enterprisesWithout this, the industry cannot be made effective.
9 comments
Information
Dear reader, to leave comments on the publication, you must to register.