During the 24 terrorist attack. The trial against the “heir” Basayev is completed 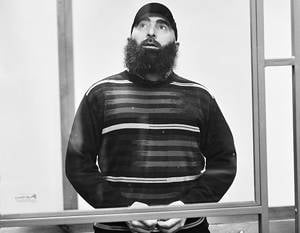 One of the ringleaders of the Ingush terrorist underground, Ali Taziev, nicknamed Magas, will spend the rest of his life behind bars. Such is the decision of the court, which recognized his guilt in the 24 terrorist attacks that claimed dozens of lives, including the attempt on the head of Ingushetia, Yunus-Bek Yevkurov.


On Tuesday, the North Caucasus Military District Court passed a verdict in a high-profile case against the leader of the Ingush gang, Ali Taziyev, nicknamed Magas.

"In the aggregate of crimes, by way of partial addition of punishments, the court decided: to appoint Ali Taziyev a punishment of life imprisonment with serving in a strict regime penal colony," the judge said, RIA "News».

The judge read the verdict consisting of 90 volumes containing more than 300 pages.

The defense was not satisfied with the sentence and will appeal it. “The sentence is based on Taziev’s testimony given during the preliminary investigation, which he refused during the court hearing, explaining the reasons. Direct evidence, living people and witnesses who would explain Taziev’s involvement in the incriminated acts, was not presented by the prosecution party. For these reasons, as well as after reviewing the protocol of the meeting and the text of the sentence, he (the sentence) will be appealed in consultation with our client, who also does not agree with the sentence, ”the lawyer said.

The defender added that the sentence was too harsh. He also said that he did not yet know what he would rely on during the appeal, specifying that he would be able to answer this question only after reading the text of the sentence.

An open process against one of the leaders of the so-called Emirate of the Caucasus took about four months with special security measures. Interrogations of witnesses arrived at the court, as well as remotely - using a video conferencing system. Among them was the head of the Republic of Ingushetia, Yunus-Bek Yevkurov, who testified to the attempt on himself four years ago.
Magas was charged with the 24 attack. Thus, according to investigators, the gangs created by Taziev blew up a regular bus in Nevinnomyssk in December 2007 of the year - then three people died, 17 suffered, the ATS building in Nazran district of Ingushetia died in August 2009 of the year - 21 people died, 289 suffered.

During the hearing, Magas pleaded guilty only under the two most "easy" articles of the Criminal Code of the Russian Federation. Before the verdict, he stated that he “kept weapon and terrorist activities are not conducted. "

Recall that Ali Taziyev, detained by the FSB officers in Ingushetia in June 2010, was initially incriminated to Art. 279 (armed rebellion), Art. 208 (creating or participating in an illegal armed group), Art. 222 (illegal possession of weapons), as well as other not too serious articles of the Criminal Code, for which he was threatened with a maximum penalty of 20-year imprisonment. Moreover, as it became known, the Taziev case was allocated by the investigative department of the FSB of Russia into a separate proceeding from the basic criminal case of the Emirate of the Caucasus, Doku Umarov, instituted shortly after its creation in December 2007.

It follows from the materials of the case that a former employee of the Ingushetia’s Ministry of Internal Affairs Ali Taziev contacted the militants back in the 1998 year, when entrepreneur Olga Uspenskaya was abducted along with him and another guard. The captive was able to redeem, and both her bodyguards were presumed dead, but later the FSB received information that Sergeant Taziev was not killed, but he joined the "forest" ones. Six years later, when the militants of Shamil Basayev attacked Nazran, he was already leading one of the combat groups of the attackers. And after the liquidation of Basayev, he headed the Ingush wing of the “Emirate of the Caucasus”.

Once in the Lefortovo SIZO, Magas partially admitted all these accusations and began to cooperate with the FSB investigation department. It is said that thanks to his help, many crimes were committed by militants not only in Ingushetia, but also in other North Caucasian republics. However, the charge brought against the leader of the militants in the final version did not leave him a chance for release.

By tacit agreement between the UK and the FSB, the latter investigates crimes of a terrorist nature, during which, as a rule, there were no victims or injured persons. However, in the case of Magas, the FSB managed to obtain, through the Prosecutor General’s Office, the transfer of several cases from the Investigative Committee for grave and especially grave crimes, for which Ali Taziev passed in absentia of the accused, at once.

As a result, Magas was among other things accused under Art. 277 (assault on the life of a statesman), Art. 317 (encroachment on the life of a law enforcement officer) and Art. 167 (intentional destruction of property) of the Criminal Code of the Russian Federation for organizing an assassination attempt on 22 in June 2009 on Ingushetia’s head Yunus-Bek Yevkurov by order of Umarov. As a result of a suicide bombing, a security guard was killed, and Yunus-Bek Yevkurov and his brother Uvays were seriously injured. For the suicide-driven Gazel exploded near the Nazran 17 ROVD building on August 2009, the victims of which were 25 people, and 140 were injured, Magas was additionally imputed to other articles. 105 CC (murder) and art. 205 (terrorism).

Finally, for organizing the detonation of a passenger bus in Nevinnomyssk 9 in December 2007 of the year, in which three people were killed and 14 were injured, charges were added to the Magas case of killing two or more people (criminal code 105) .209 CC)

Ctrl Enter
Noticed oshЫbku Highlight text and press. Ctrl + Enter
We are
"Criminal failures" of Colonel Kvachkov
28 comments
Information
Dear reader, to leave comments on the publication, you must to register.