Under the terms of the Versailles Treaty, Germany was forbidden to have its own air force. But no one in Germany considered the situation to be unshakable. Politicians and the Reichswehr dreamed of a revenge, such sentiments were strongly fueled by the people. While waiting for Germany to acquire the right to create its own air force, numerous sections of glider pilots were created throughout the country. It was in these sports circles that the future Luftwaffe aces of Hartmann, Marcel, Barkhorn, Novotny received their first flying skills.

Theoretically, the German girls were not ordered into these circles, but the unwritten rule limited the social role of the German woman to three “K”: “Kinder, Kirche, Küche”. Hanna Reich was one of the few who decided to go beyond this triangle. 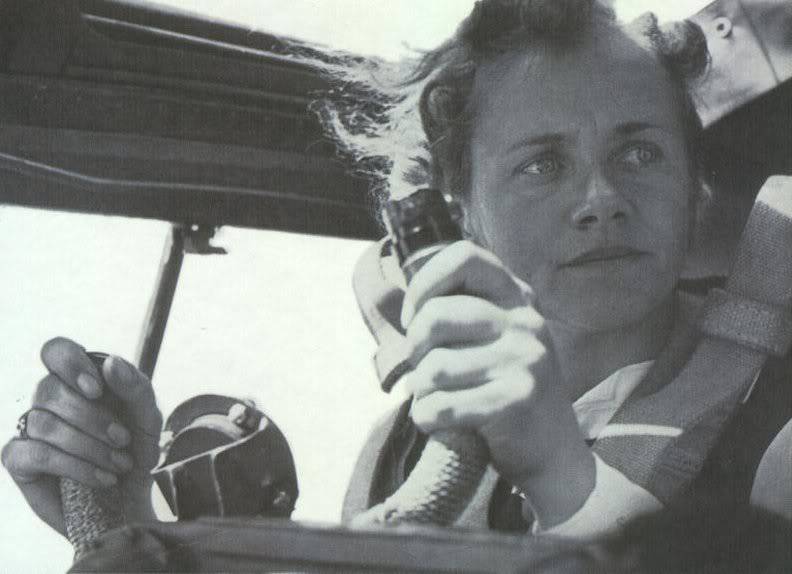 Hannah was born in Silesia 29 March 1912, in the family of an ophthalmologist. Since childhood, it was overwhelmed by two passions: medicine and aeronautics. But if the parents perceived the first hobby quite calmly, they categorically objected to the second one. One day, the father promised his daughter that if she never gave a hint about flights before receiving the certificate, he would send her to glider piloting courses. Focus failed. Having received a certificate, Hannah refused a parental gift - a gold watch, and reminded her father of his promise. So in Graunau, the first and only cadet student Hanna Reitsch appeared in the glider school.

At the end of the courses, Hannah passes the “C-exam” with brilliance - instead of the required 5 minutes, she soars in the sky 20. Studying medicine at the insistence of her parents at Kiel University, she simultaneously enters a flight school, where she learns the wisdom of navigation, studies the design of an aircraft engine, and masters the art “ blind flight. " Hannah graduates from school, becomes famous among aviators and, one after another, sets records in altitude and duration of flight and makes the final choice in favor aviation. 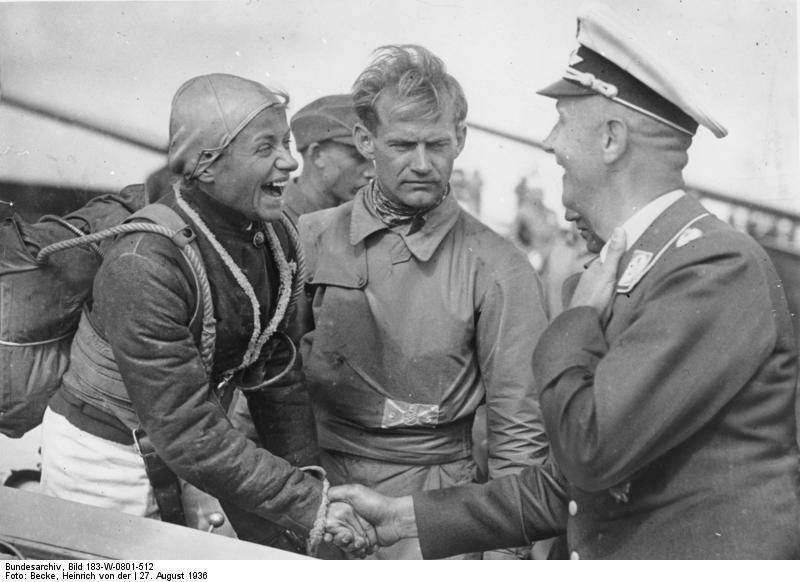 In the service of the Nazis

An extraordinary female pilot draws the attention of the Nazis. Even before coming to power, Hitler met with Reitsch and tried to attract her to National Socialism. His speeches about humiliated Germany, about the need to return her former greatness have a strong impact on Hannah. She's just something 20 years, and Hitler, of course, possessed charisma and knew how to attract people. Rytsch became his supporter and subsequently, quite rightly, had the fame of the ardent Nazi.

In 1934, a group of glider pilots is sent to South America. Their tacit goal is to conquer the hearts of Brazilians, Argentines, Paraguayans for Germany. Hanna Reich - the central figure of this propaganda tour: a high-class pilot, and besides, also a young beautiful girl! (They knew how to set up propaganda in the III Reich!) By the way, Hannah contributed 3000 stamps from her personal funds to the expedition’s ticket office.

The tour takes place with tremendous success. Argentines are simply admired by German pilots. Particularly suspicious even inspect the air vehicles: are there any hidden motors? To believe that such complex figures are performed on gliders they simply cannot. “Germans can do anything!” Becomes the leitmotif of the speeches. 12 years will pass, and it is in Argentina that numerous “rat paths” will end, which will flee from Germany, fleeing from retaliation, numerous members of the NSDAP and the SS. But in 1934, no one has yet thought about it. 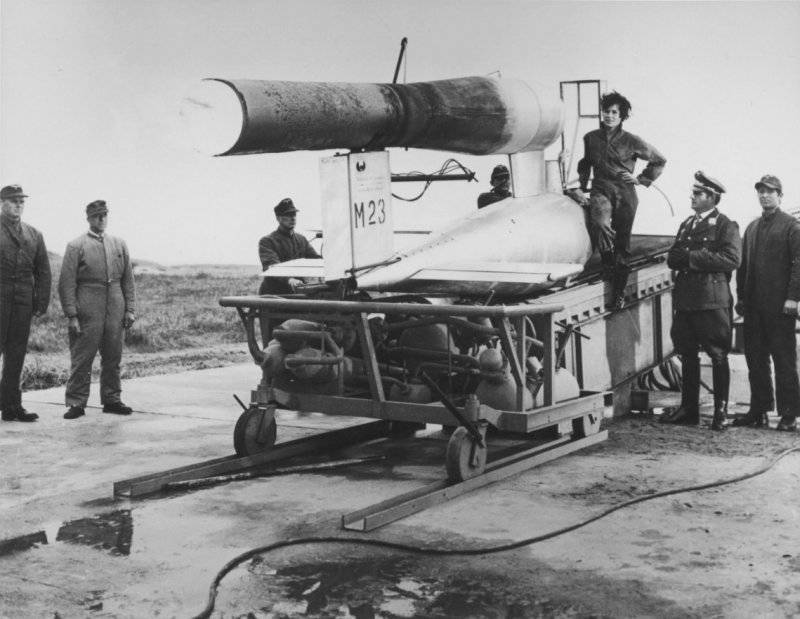 Soon Hanna Reitsch becomes the "calling card" of Germany. At the invitation of the Finnish government, she goes to cold Suomi in order to strengthen the German-Finnish friendship, demonstrates her skills and gives the first lessons of gliding to everyone. (In 1941, some of her students will bomb Karelia.)

In the year 1935, in violation of the Versailles Treaty, Germany introduced conscription. Neighboring countries are beginning to look at Germany with caution. In May, 35-th in Lisbon held "Festivos Lisboa"; the program provides demonstrations of the best glider pilots of the world. Germany is going to represent not the two-meter descendant of Siegfried - the standard of the future SS warrior, but the miniature blonde Hannah (height - 1,54 m, weight - 45 kg). Here it is - the face of this Germany, which no one wants evil! What some left-wing politicians are screaming is Bolshevik propaganda!

There will also be visits to the USA in 1938 for participation in the World Air Race, an expedition to North Africa (the time will come, and Rommel will remember with gratitude both Reitsch and other members of the expedition). At the same time, Hannah sets records, records, records. 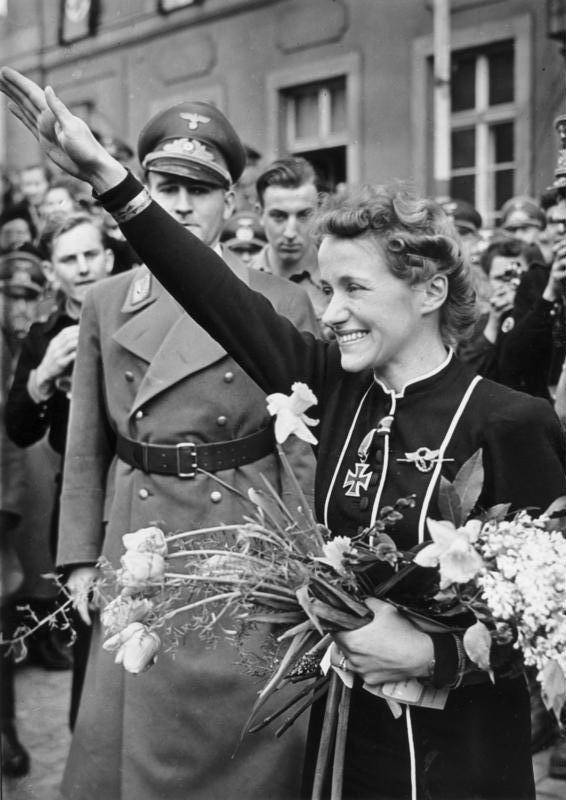 But all these shows, visits, tours - rare holidays. And in everyday life, closed to the majority, Reich is the first and only woman test aircraft in Germany. At one of the closed demonstrations, she throws the plane at the peak from the height of 3000 meters and just before the ground itself pulls the handle towards herself and the plane “candle” goes to the sky. Luftwaffe officers are delighted. Very soon, Poland, Belgium, France will hear the howling of the diving Ju87 and shudder.

At the flight range in Rechlin Reich tested bombers, fighters, attack aircraft. Hannah suggests using gliders to transport goods and soldiers. Ju52 in tow lifts a cargo glider into the air with a platoon of soldiers. At the helm of the glider - Hanna Reitsch. At the height of 1000 meters, she unhooks from Junkers and throws the car at the peak. It aligns the glider just before the ground and lands it directly in front of the generals present at the demonstration. Paratroopers jump out of the airframe and immediately take up a combat position. (This is exactly how Eben-Emael, the Belgian fort that was considered impregnable, will be taken in May 1940. That's how Skorzen’s paratroopers will land at the Campo Imperatore Hotel, where Mussolini is arrested) 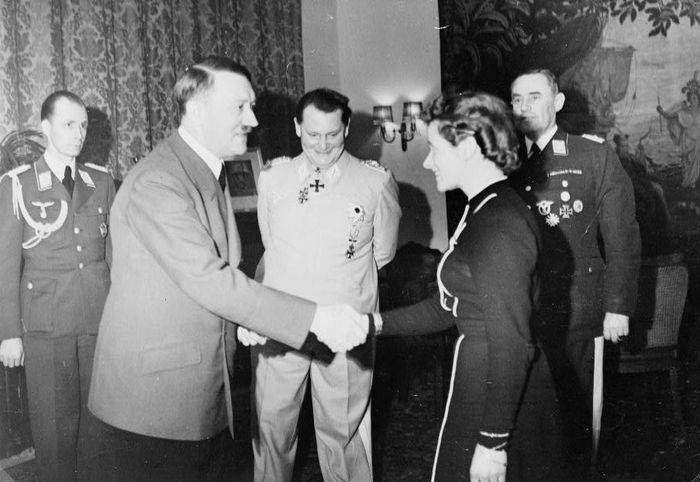 Loyal to the Fuhrer and Reich

Hannah repeatedly got into an accident. In October, 1943, during the tests of Me163, she crashed so seriously that 5 spent months in the hospital and spent another month in 4 rehabilitation. But each time she left the hospital, she returned to her dangerous job to serve the Führer and the Reich.

Officially, Reitsch was not a soldier, but this did not prevent her from receiving two Iron crosses from Hitler's hands, and from Goering - the title of honorary pilot-captain and the golden sign of the Luftwaffe pilot with diamonds.

In February, 1944, receiving another award from Hitler, Hannah offered the Führer to create a detachment of suicide pilots. According to her idea, He-111 will deliver an explosive plane filled with explosives with a pilot in a given area, where a flying bomb pilot will take control, bring a projectile at the target, and then drop out with a parachute (or die a hero). The targets of the attacks were to become important state and industrial facilities, key defense centers, large ships (they had never heard of Japanese kamikazes before).

Initially, Hitler rejected Hannah’s idea, but Reich found support in the person of Skorzeny. The approval was received and the Luftwaffe office received the first application for admission to the squad of suicide bombers, signed by Hanna Reitsch. As a base model, it was decided to take Fow-1. The device received the name "Reichenberg." The first tests of a flying bomb were unsuccessful. Two pilots were seriously injured. The Ministry of Aviation ordered the tests to end. Then Hanna herself sat at the helm of Reichenberg to prove the viability of her project. She carried out a test flight and safely landed a flying projectile.

By February, the 1945 of the year was ready for the 175 Reichenberg-4 and a group of 70 pilots. But everyone understood that this incomplete hundred ready-for-death pilots, headed by a desperate Valkyrie, would not be able to change the course of the war. The group was disbanded, the pilots returned to the front in their units. 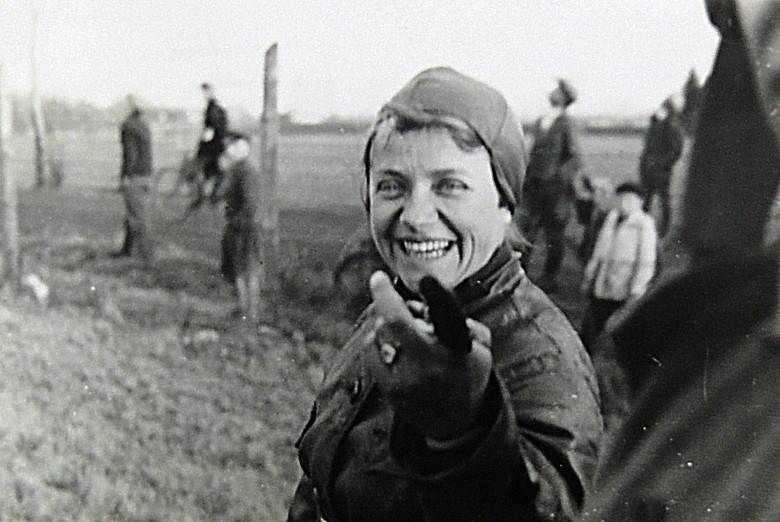 25 April 1945, Colonel-General von Graham, who was accompanied by Hannah from 1943, told a friend that he was flying to Berlin: he was summoned by the Führer. Both Hannah and Graham understood that this enterprise was almost hopeless. Soviet aviation dominates the sky over Berlin. There are few chances to fly to Berlin, but practically no flights to fly back. But the oath! But the order of the Fuhrer! For von Graeme — a career military officer who had gone through World War I, the question “to fly — not to fly” did not even stand. Another thing is Hannah. Her honorary title is not binding. But she flies to Berlin.

Reitsch and von Graham take off from the last airfield in the hands of the Wehrmacht on the sports "Storkhe". At the helm - von Grame, Hannah - the co-pilot. Already on approach to Berlin, their plane is shelled by Soviet anti-aircraft artillery, von Graeme is wounded, Hanna takes control of the machine and lands the plane at the Brandenburg Gate. She sees the Fuhrer for the last time and offers him to be saved: she will take him out on the Storkha, she will break through! But hears in response: "No." Then she will die next to him! But the Fuhrer does not need her death. Last order: to deliver von Graham to Doenitz. Von Graham has just been promoted to field marshal (the last one who was so lucky!), He was appointed commander-in-chief of the Luftwaffe instead of Goering, who had betrayed Hitler in difficult times of trial.

Reitsch plays Russian Roulette for the second time. Barely off the ground, the plane comes under fire, but Hannah dives into the clouds. She nevertheless fell that lucky chance, one in a thousand, in which no one believed anymore. 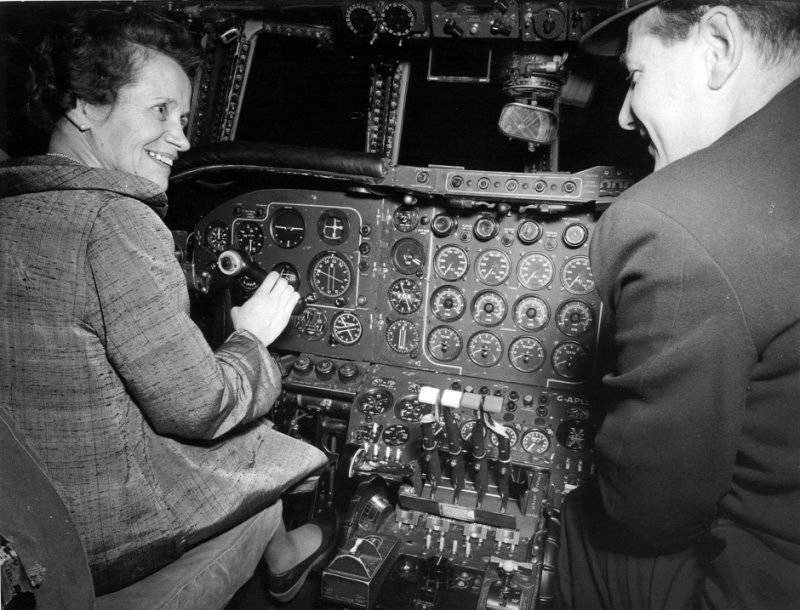 9 May 1945, the year Reich surrendered to the Americans. After spending 15 months in the camp, at 1946 she was released, where no one was waiting for her. The family perished, von Graham committed suicide, having learned that the Soviet authorities demanded his extradition from the Americans. The rest of her life was dedicated to gliding. She took part in international competitions, won prizes, in 1955, she became the champion of Germany. Founded the National Flight School in Ghana (Africa), which she led up to 1962. In 1978, at the age of 66, she set the last glider distance record, and died a year later.

In 1951, Hanna Reitsch published memoirs. There is not a line of regret for their deed, nor a word of repentance. Prisons, concentration camps, millions of battles killed on the battlefield, shot, strangled in gas chambers - as if they existed in another, parallel world. For the rest of his life, Reitsch remained a loyal supporter of the ideas of national socialism. The tragic fate of Germany did not shake her love for Hitler. Until the last days she kept, and if the situation allowed - with pride she wore the Iron Fuhrer handed to her by the Fuhrer.

Reich was a gifted person, but she gave her talents, will, character to serve the most terrible phenomenon - fascism. The soul of the departed in a different world is made to desire peace and tranquility. Hanna Reitsch did not deserve either the first or the second.

Ctrl Enter
Noticed a mistake Highlight text and press. Ctrl + Enter
We are
352 shot down as a way to defeatSoviet aces on Lend-Lease fighters. Part Z. "Cobra"
68 comments
Information
Dear reader, to leave comments on the publication, you must to register.