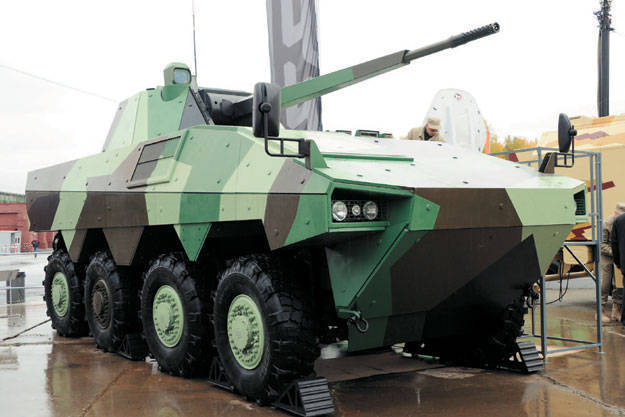 Kurganmashzavod loses its monopoly position in the Russian market for BMP. Chance to the company gives the development of civil direction


For the first time in stories NPK "Uralvagonzavod" (UVZ, Nizhny Tagil) is going to enter the market of infantry fighting vehicles (BMP). At the exhibition Russia Arms Expo-2013, the corporation presented a prototype of the newest Atom BMP, which it develops in conjunction with the French company Renault Trucks Defense (specializes in the production of military trucks). The parties plan to start mass production in a year or two.

The concept of "Atom" came up three months ago. Armored vehicles will be equipped with X-NUMX-millimeter automatic cannon of domestic production C-57 (previous models of BMPs installed 60-millimeter cannon), protected with ceramic armor panels from bullets and fragments, and equipped with a warning system about laser radiation (some missiles are guided by laser illumination). The BMP will be able to transport eight fully equipped fighters in the troop compartment. According to project manager Andrei Novinsky, the level of crew protection, depending on the configuration of the vehicle, can vary in the direction of both amplification and weakening, with a simultaneous increase in firepower (five different configurations).

The development of the UVZ can seriously shake the position of another Ural enterprise - Kurganmashzavod (KMZ), the only Russian manufacturer of BMPs so far. In recent years, the plant already shows unstable financial results due to the lack of large state defense orders and unfavorable external conditions. The appearance of a strong competitor will be very inappropriate.

Infantry will not pass

The share of sales of special equipment in the revenue structure of KMZ is relatively high - 81% (7,63 billion rubles). Almost all deliveries in the 2012 year fell on the BMP-3. This tracked vehicle was developed in 1987, the design bureau of the plant and is designed to transport personnel to the epicenter of hostilities and fire support of infantry. It is equipped with a 100-millimeter gun - launcher (40 high-explosive fragmentation projectiles and six anti-tank guided missiles are included in the ammunition), 30-millimeter automatic cannon (ammunition - 500 ammunition) and three 7,62-mm Kalashnikov machine guns Holds in the troop compartment up to seven infantrymen. The cost of one unit is about 90 million rubles.

From 2010, the Ministry of Defense refused to purchase these machines (the share of the state defense order for the BMP in the CMH revenue structure for 2009 a year is 26%). Vladimir Popovkin, who was then the first deputy minister of defense, called the BMP-3 "combat" grave "of infantry," and said that the Russian army did not need them. According to the director of the Institute of Political and Military Analysis, Alexander Khramchikhin, the concept of technology is morally obsolete. This is a weak protection against grenade launcher shots and mines fragments. The layout of the troop compartment is also poorly designed - the infantryman is uncomfortable getting out of the car.

Despite these shortcomings, products are in demand in the global arms market. In 2012, KMZ continued deliveries of BMP-3 to Venezuela (at least 16 units) and Kuwait (minimum five units), shipped the first batches of BMP-3 Marine Corps Indonesia (ordered 37 units, contract amount - 114 million dollars) and BMP-3 the armed forces of Azerbaijan (ordered 100 units). According to experts, the high demand is due to the authority of the domestic defense products in the international armored vehicles market. However, there is a negative trend: Russia is gradually losing traditional buyers. weapons (For more, see “The Threat of the“ Arab Spring ””, “E-U” No. 38 from 23.09.2013). The growth of competition from foreign equipment (American Bradley, German Puma, British Warrior, etc.) can also slow down export volumes.

Attempts to modify the BMP-3 were unsuccessful: the designers did not succeed in drastically increasing the security of the crew and the assault force while maintaining fire power. Therefore, KMZ began the development of a fundamentally new BMP based on the multi-purpose tracked platform “Kurganets-25” (the start of serial production is scheduled for 2016 year) under the order of the Ministry of Defense. Supposedly, it will be equipped with the 30-2 X-mm automatic cannon, the Kornet-EM anti-tank guided missile launcher, and the Kord X-mm robotized machine gun. The machine will receive a reinforced modular type armor protection: the crew and troops will be in the armored capsule.

However, the prospects of the project "Kurganets-25" remain in question. Start of mass production can be delayed indefinitely: KMZ has postponed the start several times already. In addition, military experts are not sure that new products will be in demand in the foreign and domestic markets. The armies of most countries of the world are gradually abandoning tracked platforms and are switching to light wheeled armored vehicles, the main advantages of which are good driving performance on normal roads along with a long engine life (drawbacks are regular tire damage and poor wheel protection against shots). The Ministry of Defense also announced plans to introduce vehicles into the troops on the chassis, partially replacing the tracked ones.

The car for the Atom infantry from UVZ, which is a modified chassis of the French VBCI armored personnel carrier with the wheel formula 8Х8 (developed by Renault Trucks Defense) and the domestic combat division, is aimed at a new niche. Another competitor is the Boomerang wheeled platform project (supervised by the Moscow Military Industrial Company, the start of mass production is scheduled for 2016 year).

Cut the swords into plowshares

Thus, KMZ was in a difficult situation. Its current production is not in demand in the domestic market and has not very good prospects in the world (primarily due to the ongoing Arab revolutions). The developed tracked platform of the Kurganets-25 BMP will experience stiff competition from wheeled combat vehicles. For example, the authorities of the United Arab Emirates (the largest in the post-Soviet history of the foreign buyer BMP-3) have already announced their intention to acquire only BMPs on the chassis abroad.

Another problem is the loss of the status of the only domestic manufacturer of infantry vehicles, which may lead to a reduction in export deliveries. Often, the preferences of foreign buyers are due to foreign policy conditions - if they have competitive foreign peers, they buy Russian equipment, because it is “Russian”. Therefore, the status gives the company a number of advantages.

However, the KMZ has the potential: the plant produces not only infantry fighting vehicles, but also airborne combat vehicles (BMD, the design of the equipment allows to parachute from aircraft), which are not yet in demand from buyers. Disputes around them have not subsided for several years. The command of the airborne troops of the Russian Federation is in favor of acquiring tracked BMD-4 to replace outdated armored vehicles of previous models, while a number of high-ranking officials of the Ministry of Defense are categorically against: in their opinion, the new equipment does not meet modern requirements due to weak security. Depending on the outcome of this discussion, the KMZ may either receive a large state defense order, or completely lose the Russian arms market before the start of serial production of Kurgants-25.

How can the plant compensate for possible losses? In our opinion, an increase in the share of civilian products in the revenue structure can give a chance: in the past three years, it has been 19 - 21%. The company produces tracked transport vehicles Chetra TM-140 (for transportation of shift shifts in off-road conditions) and mini loaders MKSM (for municipal and construction work).

Ctrl Enter
Noticed oshЫbku Highlight text and press. Ctrl + Enter
We are
List of destroyed the largest and most high-tech enterprisesThe best main battle tanks of the world 2012 of the year
58 comments
Information
Dear reader, to leave comments on the publication, you must to register.