October 17 2013
34
After 2011, the West can say about Libya with the words of Mr. Chernomyrdin: "We wanted the best, but it turned out - as always." Before the assassination of Gaddafi, which the well-known person from the State Department estimated with the expression “Wow!”, Libya built its budget almost entirely on oil. Now, almost ten percent of the prey remains. A large oil-producing business is not in a hurry to turn around in places where “militia” and common thugs are hostile. Other firms generally leave Libya. As for world oil prices, the fall of Gaddafi did not at all contribute to their fall. Everything turned out exactly the opposite. Democracy in Libya, too, did not appear - there is practically no representative, but no authority at all. There is only the struggle of various factions for oil, weapon and territory. 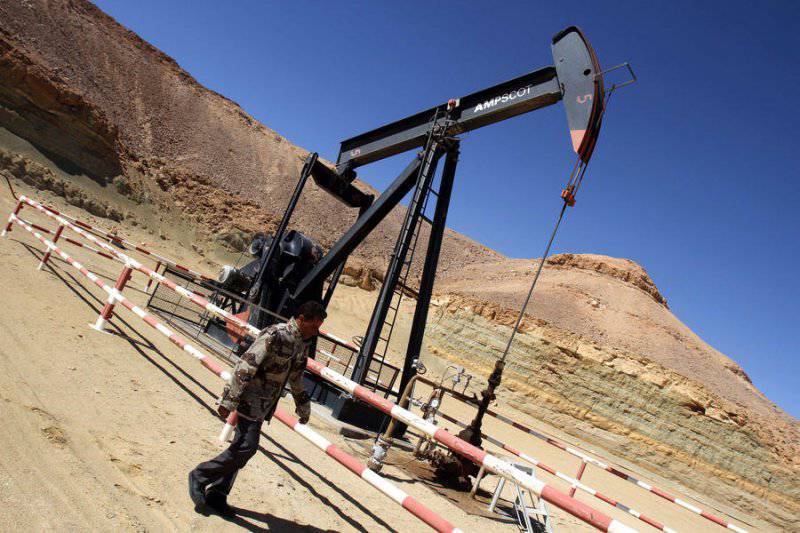 In the summer of 2013, in Libya, one after another strikes and protests took place. Raw materials workers blocked oil terminals and ports. The country has reduced oil production from 1,5-1,6 million barrels to 100 thousand barrels per day, notes "Lenta.ru" with reference to France-Presse. The figures were voiced on the TV channel Al-Hurra by Saad bin Shrad, a member of the parliamentary commission on energy.

The strike was “launched” at the end of July by the very “rebels” who overthrew Gaddafi. The accusations of the conflicting parties are contradictory. The workers accuse the authorities of selling additional volumes of oil "to the left", and the government claims that the reason for the protest is the attempt of the guards to organize the sale of raw materials on the "black market".

Gas production also prevented the protests. According to Reuters, the armed groups of security guards and workers blocked the work of most gas fields in the eastern part of Libya.

Amid these protests, world oil prices have risen.

Further more. In mid-September, it became known that Libya had to reduce oil production by 90%. This was due to numerous strikes at the largest enterprises. The army and the police were powerless, they write "Days. Ru" with reference to Russia Today.

The rebels demanded the autonomy of the eastern regions, higher wages, and a change of leaders. Loss of government control over the situation threatens to turn into a collapse for foreign investors.

The head of the oil and gas company Crescent Petroleum (UAE) Badr Jafar said: “Libya is on the verge of a disaster. The joy of the Arab spring was here, as in most other countries, very short-lived. ”

“The situation in the country is very dangerous. Each village is ruled by its own militia, but there is virtually no central authority, ”said Dragan Vukovich, head of the Mediterranean International oil company, which left the Libyan market.

On the present and future of Libyan oil on the pages "New Eastern Ferris" spoke Eldar Kasayev - specialist in energy investments in the countries of the Middle East and North Africa.

The volume of oil production in Libya does not exceed today 1,4 million barrels per day. According to the Libyan leadership, by the end of the year the country plans to increase this figure to 1,7 million barrels. But to achieve this will not be easy. The analyst calls several serious obstacles. Select the main ones:

1. Frequent violent clashes in the eastern part of the country where the main oil fields are located.

2. Substantial financial resources are needed to restore the industrial infrastructure that was damaged during the war. In the meantime, there is a crisis in Europe and the USA, and one cannot expect large investments from them.

3. Libya's investment attractiveness has fallen due to political, economic and legal risks. Foreign enterprises are in no hurry to return to the country. In addition, Libyans are not going to compensate foreign oil companies for losses associated with damage to equipment.

Nevertheless, in general, according to the expert, the work of Libyans in attracting Western firms is being conducted successfully. In the autumn of last year, a major specialized event called Oil, Gas and Sustainable Development was held in Tripoli. Among the participants were high-ranking politicians and representatives of business structures.

But still, continues the author, despite the possible creation of conditions for potential investors, the tribal standoff in Libya can otherwise place accents in hydrocarbon issues. There are doubts that the central authorities will be able to control large deposits, especially in Cyrenaica, striving for autonomy.

Maybe there are chances for Russian oil producers?

At the end of last year, the expert recalls, Gazprom Neft sent to Eni a notice of its intention to exercise an option to acquire a stake in the Elephant project. However, you need to get an official approval of Tripoli for entry into the project, but this is not easy to do.

The author writes that the Libyan authorities are hardly ready to completely forget the “double game” of the Kremlin, which had previously tried to gain the support of both Gaddafi and his opponents. It is no coincidence that the leadership of Libya announced unresolved issues, including checking Russia for the presence of a “corruption component”. In addition to Gazprom Neft, the analyst continues, Tatneft and Gazprom Libya B.V. are trying to recover assets in the Libyan oil field. According to the expert, they will be hindered by the lack of special privileges in the arsenal of European companies and by the high degree of Libyan confidence in the West: after all, the latter supported those who later joined the ladies.

Moreover, Russian companies are not expecting bright prospects in Libya because of the October events, about which the famous historian Stanislav Khatuntsev in the newspaper "News" says so:

“October 1 killed the Libyan Air Force Col. Mohammed al-Andalusi al-Sushi and wounded his mother. The Russian woman E. Ustyuzhaninova, a fan of another Libyan colonel, incomparably better known to the world, was detained and accused of a crime. Is she a real killer or not, the question is in many ways a rhetorical one. In the hands of local militants, she could confess not only to the attack on Al-Sushi’s house, but also to the murder of Pope, Pharaoh Snofra, the Prophet Muhammad, and even her idol Gaddafi. Nevertheless, the next evening, a mob of armed Libyans, under the pretext of taking revenge for the death of al-Sushi, attacks the Russian embassy. The "outraged" act in a very professional manner, being perfectly oriented in the territory of the diplomatic complex and promptly destroying the surveillance cameras available there. "

The Libyan authorities, as always, are powerless. The Russian embassy is being evacuated to Tunisia, from there the October 4 flies to Moscow. History with Ustyuzhaninovoy and the Russian Embassy paralyzed communications between Moscow and Tripoli.

However, in Libya it is unlikely that it "shines" to foreign oil companies. And Libya itself is hardly likely to “shine.” Stanislav Khatuntsev in one paragraph described the future of this country:

“However, there is no country as such now. There is a territory marked on the world map under the nickname "Libya". In Africa, this area already exists. It collapsed in the early 1990-ies of Somalia. But the prospects for Somalia compared to what shines the former Jamahiriya, for me personally, seem to be a little more bright. There are several secular centers of power that control the order on the lands they occupy, perhaps more effectively than Tripoli, and the central government, albeit with the help from abroad, successfully fights against terrorists who at one time were close to victory. In Libya, compared to the quarter-century ordeals of Somalia, as in Santa Barbara, everything is just beginning. ”

In essence, we will add in conclusion that the West has launched a permanent revolution in Libya, which is now being devoured by the revolutionaries themselves. The media often wrote that the NATO countries were going after the overthrow of Gaddafi to profit from the resources of Libya - primarily high-quality oil. And what is the result? Today, Western investors are not only not in a hurry to invest capital in a country torn by internal struggles, both economic and tribal, but also one after the other go back home, preferring less money, but life is quieter.

Observed and commented on Oleg Chuvakin
- especially for topwar.ru
Ctrl Enter
Noticed oshЫbku Highlight text and press. Ctrl + Enter
We are
Judgment in Tripoli. Saif al-Islam Gaddafi sentenced to deathLibya: after Gaddafi
34 comments
Information
Dear reader, to leave comments on the publication, you must to register.