The division of the Strategic Missile Forces, re-armed to the Yars and Topol-M missile systems, successfully passed the final test 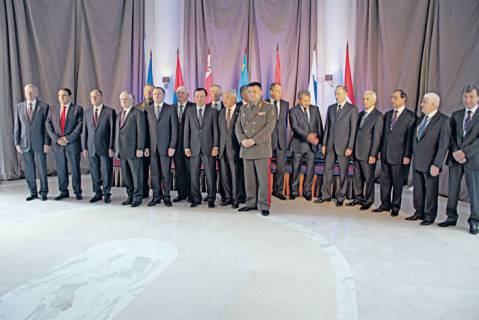 “NVO” has repeatedly addressed the situation in Central Asia, in particular, in the articles “Commonwealth against rivalry” (18.12.09), “USC Center against Central Asia” (22.10.10), “A holy place is never empty” (23.11.12), "Finding meaning for the SCO" (27.09.13). They state an extremely difficult situation in the region, and the further it goes, the more difficult it becomes. This is influenced by a number of factors.


First, the United States and NATO are leaving Afghanistan next year (maybe some contingent will remain there, but it will not be able to fundamentally influence the situation), which dramatically increases the likelihood of complete destabilization of this already unstable country.

Secondly, China’s expansion into the region (for the time being economic) is accelerating, primarily due to Russia's position.
Thirdly, within the region itself there are strong contradictions between and within countries.

For several years, Moscow was very worried about the presence of Western troops in Afghanistan, seeing in it the “encirclement of Russia”. Only when two years ago, NATO announced the withdrawal date from the Hindu Kush, did the Kremlin realize that it was necessary not to worry about staying, but about leaving. And it would be better if the "circle of Russia" would have been in Afghanistan for a longer time. But they will not be promoted, adding to the long list of unlucky explorers of this peculiar country.

At the same time, the Kremlin did not understand one more thing - that by its endless demonization of the United States and NATO, by constant tales of their enormous military power and aggressive intentions, Moscow inflicts quite concrete damage to itself. Because in these tales they continue to believe in almost the entire post-Soviet space. Only conclusions do not at all those that Moscow needs. Many post-Soviet regimes still believe that if you bend back to Washington well, it will give them money and protect them from external enemies. In particular, leaders of almost all Central Asian countries think so, seeing in the US a force that can balance the influence of Russia and China. They do not understand that if the Americans leave a small contingent in the region, it will only become a problem for Washington itself, because due to geographical remoteness from the US and, most importantly, due to the lack of open communications with the US, it will become a hostage of the surrounding countries, turn of the same Russia and China.

In addition, no one has learned the lessons of the August 2008 war of the year and of the sad fate of Georgia. This is someone who really sagged before Washington and Brussels, but at the critical moment did not receive the slightest help from them. Moreover, the USA (nothing to say about Europe) will never shed a single drop of American blood for the sake of saving any of the Central Asian regimes from internal and external opponents (here the fate of the faithful US ally Hosni Mubarak, who did not lift a finger) could serve as a lesson . Accordingly, relying on Washington, the countries of the region do not increase, but lower their own security, because they replace it with illusions. But in order to realize all this, one must see the facts, and not listen to propaganda, and this is by no means all of them succeed.

In the meantime, the leaders of the countries of Central Asia continue to flirt with Washington. In particular, they are hoping for the "distribution of elephants", that is, the military property of the western grouping in Afghanistan. Indeed, the property of this is so much that a significant part of it is cheaper to quit than to export. True, this is not about military equipment, but about a variety of equipment. At best, about armored vehicles built according to the MRAP scheme (that is, with enhanced mine protection). NATO countries (primarily the United States and the United Kingdom) slapped several thousand of these vehicles, which, in essence, are not combat vehicles, but vehicles. That is why now they are simply not needed. You can distribute them to Afghanistan and neighboring countries, but only the combat power of the latter will not increase.

China we ourselves allowed into Central Asia for the sake of the great idea of ​​deterring the United States. The Chinese are happy to push the Americans out of the region, and at the same time us. They just buy the region in all ways wholesale and retail. Unfortunately, it does not seem possible to reverse the process, since the financial and economic opportunities of Moscow and Beijing are incomparable. Americans will not be able to call for help either, because they have neither the resources to contain Beijing, nor the desire to at least help Moscow in any way.

Beijing is very fond of demagogic arguments about the fight against "terrorism, separatism and extremism." At the same time, in reality, he is not going to restrain the Taliban. He will agree perfectly with them through his main strategic ally, Islamabad, who in reality controls the Afghan Taliban. And Moscow itself hardly dreams of Chinese military aid in Central Asia. After all, the appearance of Chinese troops in this region will mean that Russia has lost here the last levers of influence.

But our security system in the region is far from perfect. Of the five Central Asian countries, three are members of the CSTO, two are not included, but everything inside the CSTO is very uneven.

The point of view is quite common that the key element of the security system in Central Asia is Uzbekistan, so its last year’s withdrawal from the CSTO is an extremely regrettable event. Uzbekistan borders with all the other four countries in the region, as well as with Afghanistan. Its population is almost equal to the population of the rest of Central Asia combined, and the sun is also very large.

However, one can say much more about this country. For example, the fact that it has a strict totalitarian regime, and the standard of living of the population is extremely low. President Islam Karimov has repeatedly demonstrated that he is not going to be a member of any alliances where Russia is the leader. Tashkent is in extremely tense relations with all the other countries of Central Asia. The armed forces of the country are formally large, but their combat effectiveness is dubious, and the equipment gradually falls into disrepair, since it was entirely inherited from the Soviet army and has not been updated since. The country has no own military-industrial complex, the Tashkent aircraft factory was successfully destroyed by its own leadership, its remains were evacuated to Ulyanovsk. The Fergana Valley, which is one of the most densely populated regions of the world, is a real “powder keg” of Central Asia, since there is very high unemployment, a very low standard of living and the Islamists are rapidly growing stronger. At the same time, it borders simultaneously with Kazakhstan, Kyrgyzstan and Tajikistan.

Accordingly, talking about the need for a union of Moscow and Tashkent is somewhat strange. At least, because Tashkent does not want this. A true union is possible only with the consent of all parties to it. Uzbekistan has already been a member of the CSTO. And inside this organization I didn’t do anything except direct sabotage of all its decisions and events. Accordingly, his departure was not a disaster, but a boon to the organization. In addition, if we achieve an alliance with Tashkent, then on whose side should Moscow be in the event of a likely conflict between Uzbekistan and Tajikistan or Kyrgyzstan? Finally, in the case of the Islamic uprising in the Fergana Valley, we are ready to send the Airborne Forces there, knowing that the coffins will probably go to Russia in the hundreds, and most likely thousands, in order to save comrade Karimov. And no one will even thank us for this, they will only shoot in the back and curse both imperialists and occupiers.

CONSENT IS A PRODUCT OF NON-RESISTANCE OF THE PARTIES

For other reasons, it does not seem possible union of Russia with Turkmenistan. This country lives in its own world and is not going to leave it. While the Taliban were in power in Afghanistan at the end of the 90s, Ashgabat got along very well with them. To participate in any collective security systems, Turkmenistan is not going to, it is her right. We cannot force the union by force to either Tashkent or Ashkhabad. Which is good, since the imposed union is not as such and, with a probability close to 100%, leads to betrayal by the forced “ally”. At the same time, it should be noted that recently, Turkmenistan has begun, albeit in small quantities, to acquire modern weapon (Tanks T-90S, MLRS "Smerch", missile boats of project 12418). This weapon will not be directed against the Taliban, but against Uzbekistan on land, against Azerbaijan at sea and against Iran in both environments. Nevertheless, the fact of military-technical cooperation in itself will certainly contribute to a certain rapprochement between Moscow and Ashgabat. But, of course, it will not reach any alliance, and there should be no illusions here.

There are problems within the CSTO, and Russia is largely to blame for them herself. Moscow cannot overcome the loss of the USSR complex and the US phobia complex. Because of this, two poor, failed states (Tajikistan and Kyrgyzstan), whose security depends on the Russian military bases in these countries for 100%, are regularly blackmailed by these bases. This is completely absurd and outrageous. It is doubly absurd and outrageous that Moscow regularly gives in to this blackmail and makes various concessions to Dushanbe and Bishkek. Although it would be possible to explain once only to these small but proud countries that we can easily withdraw our troops from their territories and give Tajikistan and Kyrgyzstan their own destiny (which they actually deserve). But, alas, Moscow has complexes: Soviet and American.

In recent years, Moscow has managed to reach the optimal variant of post-Soviet integration - CU / CES - Eurasian Union. It is in its construction that one should invest maximum efforts, while being aware that the admission of any new country into it will bring only harm, and substantial harm. Attempting to attach unnecessary additional elements to an unfinished structure can simply bring it down. The creation of the Eurasian Union should be the biggest success of Russian foreign policy, and its collapse due to hasty expansion will be the biggest failure.

Moreover, a military alliance must also be built in the same threefold version. Moreover, it has already formed de facto inside the CSTO: only Moscow, Minsk and Astana make a real contribution to the collective forces. In particular, in Central Asia, it is necessary to focus on the closest possible alliance with Kazakhstan, without straining about the rest. This does not mean that we should exclude Tajikistan and Kyrgyzstan from the CSTO, but they need to be made clear that they must behave appropriately and understand who needs what to whom.
But, alas, we have complexes.