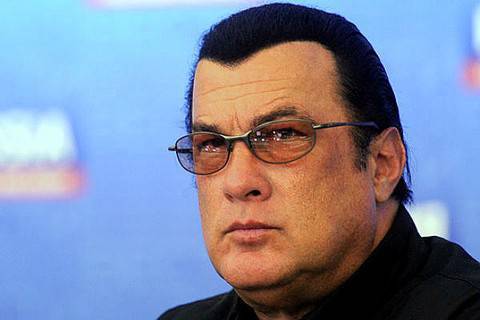 The world-famous American film actor Steven Seagal will advertise the Russian weapon. This is confirmed by his visit to the Kalashnikov concern and the interest shown in sniper rifles and civilian weapons, including and "Saiga-12". Earlier, ARMS-TASS, citing Russian Deputy Prime Minister Dmitry Rogozin, reported that the Russian authorities could offer Steven Seagal to take part in advertising small arms manufactured by him. Degtyarev abroad.


When meeting with the vice-premier at the end of March, Seagal promised Rogozin to help with the promotion of service in the Russian army. At the same time, he agreed and said that “I will be happy to share with you my experience, my philosophy, for me it will be a great pleasure.”

In the Kalashnikov Concern, Sigal could not meet with Mikhail Kalashnikov for his health reasons. In the letter handed over to the famous gunsmith, the actor emphasized his respect for him and wrote that "I will continue to fight terror and tyranny, no matter where I am, and I will always think about you."

During one of his speeches to manufacturers, Rogozin said that Russia should not only hold second place “in arms exports in the world, but in the future take first place, including“ seize ”the small arms market and the ammunition market.” At the same time, he expressed confidence in the possibility of this.

Steven Seagal agreed to become the face of the Russian arms manufacturer ORSIS, at whose facilities a high-precision sniper rifle ORSIS by Steven Seagal will be created. This was reported by the press service of the company. The actor has almost 40 years of experience in sniper shooting and it is on the ORSIS brand that he chose. Creating your own weapon for ultra-long range shooting is his long-time idea.

An agreement has already been reached between PROMTECHNOLOGIA and Steven Seagal on the design and serial production of ORSIS by Steven Seagal rifles with an aiming range of up to 2400 m (1,5 miles). In Moscow, on October 11, the Hollywood actor will take part in the Arms & Hunting 2013 exhibition and will give a briefing.