Two days of discussions in Brussels. NATO is confident that they fully fulfilled their mission in Afghanistan 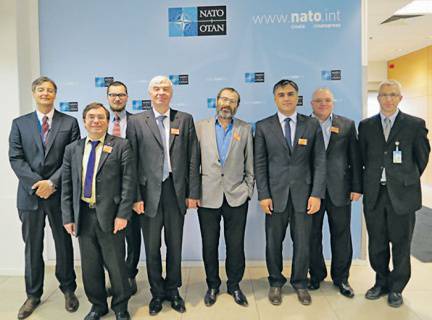 The withdrawal of NATO forces from Afghanistan will not help the Taliban regain power in this country after 2014. The Afghan political situation is unlikely to undergo significant changes after the level of the Western military presence near Hindu Kush decreases, and the election of a new president in the spring of 2014 will be the main political event for Afghan society and the state. Such conclusions were made by Russian and NATO experts on Afghanistan after a two-day discussion in Brussels.


The September trip of Russian experts specializing in Afghan and Central Asian issues (among which was the author of these lines), to the headquarters of the North Atlantic Alliance was conceived and organized by the Director of the NATO Information Office in Moscow, Robert Pchel. According to the headquarters officials, the visit of such an expert delegation was the first in stories Russian-NATO relations.

Representatives of the alliance, among whom were senior and senior officers, high-ranking diplomats, leading political advisers, discussing Afghan issues, focused on several plots - the results of the ISAF mission, forecast the development of the situation in Afghanistan after 2014, the problem of organizing a new Afghan NATO operation “Reliable support ”, Cooperation between Russia and the alliance in the Afghan area and, finally, the upcoming presidential elections in Afghanistan in the spring of 2014.

According to NATO Deputy Secretary General Alexander Vershbow, who met with Russian experts on 19 this September, the main achievement of NATO in Afghanistan was the destruction of the infrastructure of international terrorist organizations, primarily Al Qaeda: “The fundamental goal of NATO in Afghanistan was not to country to become a haven for international terrorism. And this goal has been achieved. ” Vershbow believes that after the withdrawal of the Western coalition forces from Afghanistan, we should not expect a Taliban revenge: “The Taliban, although they enjoy some support from some Afghans, are still not able to seize power in Afghanistan either now or after 2014, when the NATO forces withdraw from the country the bulk of their units. This is primarily due to the fact that the Taliban offer a medieval regime for Afghanistan, unpopular among Afghans. ”

According to Vershbow, the Afghan national security forces, the army and the police, are guarantors of the Taliban’s failure to return to power. “Today, there is an increase in the number of Afghan security forces, which are beginning to enjoy strong support from the country's population. They are taking an independent part in the 90% of military operations that are being conducted in Afghanistan, "said Vershbow, noting that this leads to a significant increase in casualties among Afghan military and police:" It is the Afghans who today bear the main casualties in Afghanistan in the fight against the Taliban. " .

Although the North Atlantic Alliance intends to withdraw its troops from Afghanistan, however, Vershbow and other headquarters officials prefer not to talk about stopping, but about “transforming” the Afghan NATO mission. “Operation Reliable Support, which we are launching, is a new form of NATO participation in Afghanistan’s affairs after 2014. We are not leaving Afghanistan, we are only changing the form of support for the Afghans, ”the NATO Deputy Secretary General stressed.

However, for now, we can speak with caution about the exact dates of the start of Operation Reliable Support. As one of the officials at NATO headquarters told NVO, the Afghan-American status-of-forces talks, which should regulate the procedure for finding US units in Afghanistan after 2014, are extremely difficult. The content of a similar agreement between the Afghan government and NATO headquarters depends on the parameters of the bilateral status of forces treaty between Kabul and Washington.

According to a competent interlocutor of NVO in Brussels, negotiations between the government of Hamid Karzai and Washington are difficult: “They remind of endless bargaining in the eastern market, when it is necessary to make one concession, as a partner immediately begins to demand another, perceiving flexibility as weakness.” The alliance’s headquarters official didn’t hide the irritation too much, noting that Karzai is not taking the US hostage today, but himself: “If the Americans and Afghans do not sign the status-of-forces agreement before October 2013, then most likely further negotiations will be stopped and resumed already in the spring of 2014 of the year - after the election of a new president of Afghanistan. ” Obviously, in this case, the new president will sign the agreement with the Americans on behalf of Kabul.

The NATO headquarters officials have repeatedly stressed during conversations with Russian experts that to launch Operation Reliable Support, the alliance does not need any additional international legal sanctions (for example, the decision of the UN Security Council). “It would, of course, be nice if such a resolution of the UN Security Council were, and NATO would support the appearance of such a resolution,” one of the alliance officials said in an interview with NVO. - However, this is not a prerequisite for the start of a new mission. A direct appeal from the government of Afghanistan is quite enough. ”

“With 1 January 2015, Afghanistan will become a fully sovereign state. And at the request of the Afghan government, we can stay in order to further support this country, ”said Alexander Vershbow, stressing that“ NATO will only be engaged in a training mission in Afghanistan, and the United States, after 2014, will continue to assist this country in fighting the remnants Al-Qaida.

NATO Headquarters is counting on cooperation with Russia in the implementation of Operation Reliable Support. “The interests of Russia and NATO with regard to Afghanistan coincide: together we want Afghanistan to be stable and fit into the Central Asian region,” says Alliance Deputy Secretary General Alexander Vershbow.

A senior representative of the Supreme Commander-in-Chief of the NATO armed forces (SHAPE), in an interview with Russian experts, confirmed that the alliance needs to cooperate with Russia: “It is important for us to use the transit opportunities through Russian territory, to maintain good relations with Tajikistan and other Central Asian countries. For us, it is also important to have constructive cooperation with Russian commercial organizations providing transit. In addition, we are interested in Russian investments in Afghanistan, as well as in helping the Afghan army by specialists from Russia. ” According to a military official in SHAPE, “both Russia and NATO share some common interests in Afghanistan and the region as a whole - the fight against drugs, the fight against trade weapons and maintaining the balance and balance of power in the region, especially in terms of the security situation. ”

Speaking about the Afghan drug problem, Alexander Vershbow said that "NATO is unlikely to be the leading organization that will fight drugs in Afghanistan, especially after 2014 of the year."

Commenting on the issue of negotiations between the United States and the Taliban, the outcome of which was the opening of the Taliban office in Qatar this summer, Alexander Vershbow noted that “relations with the Taliban are a very difficult question”: “Ultimately, Afghans will have to come to a dialogue between the official government and the Taliban. Given the Afghan Constitution, the Taliban could possibly participate in the political life of Afghanistan. ” However, Vershbow said, “I am skeptical about this, at least considering the perspective of the next few years”: The Taliban should join the peace process, taking into account the Afghan Constitution, although this will probably be an indirect road. There must be a political basis so that the Taliban cannot return to power. ” "I will not put much on this card," summed up Vershbow, commenting on the prospects for the negotiation process with the Taliban.

Alexander Vershbow stressed that NATO and NATO countries have no preferences for presidential candidates in Afghanistan: “We are interested in the election process itself so that it is transparent enough so that there are no doubts about the fairness and legitimacy of the elections, since their results have great significance for the future development of Afghanistan. ”

In addition to meetings with NATO officials, Russian experts had the opportunity to talk on the platform of the NATO Parliamentary Assembly with leading European experts on Afghanistan and Central Asia. One of them, Paul Quinn-Jude, representing the authoritative International Crisis Group (ICG), stressed that the real risk levels of jihadists after 2014 in Afghanistan and the Central Asian region are unknown. “Their (risks) are difficult to calculate, as there are no accurate data on jihadist organizations and their potential,” said the analyst at ICG. According to him, the first countries that may be threatened by jihadists are Tajikistan and Kyrgyzstan, which are unlikely to repel these threats: "In these countries there is no centralized state control system in the peripheral regions that contributes to the spread of the threat of jihadism." Quinn-Jude believes that the main burden of ensuring security after 2014 in the region falls on Russia and China: “One of the main problems is how Russia can protect Tajikistan’s border with Afghanistan.”

Brigadier General Patrick Nopen, representing the Royal Institute for International Relations (RIIR), speaking about the possibility of Russia-NATO cooperation in the Afghan project, said: “Russia and NATO must agree on the division of labor in Afghanistan, primarily in the fight against drugs. At the same time, it is necessary to take into account the factor of reducing Russian influence in Central Asia and strengthening China there.

As part of their visit to NATO headquarters, Russian experts also met with Russia's Permanent Representative to the North Atlantic Alliance, Alexander Grushko. The Russian diplomat spoke about joint projects with NATO in Afghanistan (providing helicopters to the Afghan army, training drug police officers, etc.). Commenting on possible scenarios for the development of events in Afghanistan after 2014, Alexander Grushko ruled out the possibility of any kind of military presence of Russia in Afghanistan, making it clear that Moscow is more interested in the problem of ensuring the security of the borders of Afghanistan with the republics of Central Asia.

Commenting on the results of the meetings in Brussels, Omar Nessar, director of the Center for the Study of Modern Afghanistan (CICA), noted that a new platform has actually appeared where Russian and NATO experts can exchange views and develop general recommendations regarding the Afghan problem hub: “Meetings at NATO headquarters and in the Parliamentary Assembly of the Alliance were held not only in the form of briefings by NATO officials, but also as a presentation of assessments of Russian experts. These assessments, by the way, did not always coincide, and there were almost more disputes between Russians than with NATO members. However, this, in my opinion, only makes mutual communication more valuable. ”

Ctrl Enter
Noticed oshЫbku Highlight text and press. Ctrl + Enter
We are
Afghanistan and Pakistan are US alliesBattle without a win
Military Reviewin Yandex News
Military Reviewin Google News
52 comments
Information
Dear reader, to leave comments on the publication, you must sign in.