This RPG was adopted by the German army in the middle of the 80s. last century. However, thanks to numerous modifications, it still remains an effective anti-tank tool capable of solving various combat missions.

In modern combined arms combat, the main striking force is armored forces. Tanks it is planned to use it in a massive manner, which will contribute to the full disclosure of their combat potential. To counter the enemy’s armored armada, the infantry units of any modern army in the world must be saturated with a variety of anti-tank weapons.

The tasks of anti-tank defense are solved by a whole complex of armaments and military equipment that hits enemy tanks at various ranges: from the minimum to the maximum possible. A special role in this system is assigned to hand-held anti-tank grenade launchers. They are equipped with small platoon-type units, which makes these combat groups a dangerous opponent of armored vehicles.

The leading position among foreign countries developing grenade launchers is occupied by German firms - the countries of the ancestor of this type of weapon.

At the end of the 20th century, the development of Dynamit Nobel, the Panzerfaust 3 anti-tank grenade launcher adopted by the German army in 1985, became the most famous. weapons conducted by Dynamit Nobel with 1978

The decision at the state level to create the Bunkerfaust 3 RPG was preceded by a study by German specialists of the possible tasks and goals that the troops should solve with these weapons. The results of the study once again confirmed that the long-term and continuous improvement of combat vehicles and their body armor, as well as the need to use combat units in rapid response operations, place high demands on modern anti-tank weapons. In this regard, the Armed Forces of Germany have developed a TTT for modern infantry wearable anti-tank weapons. New weapons should be multipurpose; ensure the defeat of military equipment of varying degrees of protection (including with dynamic protection, and long-term fire points); Shooting should be carried out both in open areas and from closed premises at moving and stationary targets with a high probability of hitting at 400-600 distances during day and night and in any weather conditions. The sample was supposed to be manufactured on existing industrial equipment, which will ensure the optimal value of the cost-effectiveness parameter; the sample should be easy to operate and have a long storage time in warehouses without checks.

In accordance with these requirements in Germany, Dynamit Nobel created the Panzerfaust 3 anti-tank grenade launcher adopted by the Bundeswehr.

All members of this family have a very high degree of unification of components and parts, which has reduced the cost in the production of weapons and operation in the army. 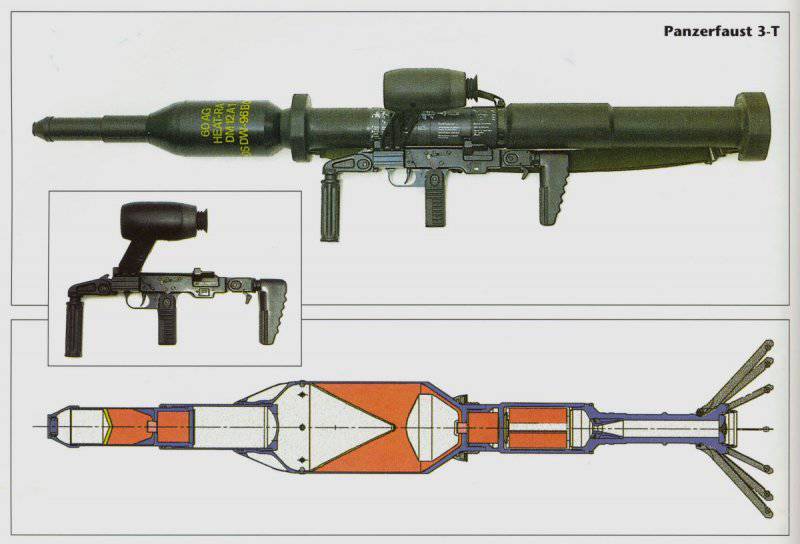 Panzerfaust 3 (Pzf 3) - basic sample. The Pzf 3 design incorporates the recoilless principle of launching the Davis Gun - using the thrashing of mines, which allows firing from enclosed spaces, while the charge of the jet engine burns completely in the launch tube.

Structurally, the Pzf 3 grenade launcher consists of a starting device comprising a housing, a power supply device (an individual sensor), a rear handle, a shoulder rest and a transport and launch container with a grenade. The container has a docking device for installation on the starting device.

Grenade complex subcaliber with a cumulative warhead, solid-propellant rocket engine and folding feather stabilizers. The warhead is equipped with a gang-feeding fuse and a retractable rod with a fuse contact sensor installed at its end. The rod is advanced to the working position by the operator when firing at heavily armored targets, such as tanks; when shooting at unarmored, lightly armored targets and fortifications, the operator places the boom in a cumulative funnel. The caliber and type of warhead may vary according to the customer.

The Pzf 3 grenade launcher is equipped with a Simrad IS-2000 rifle scope manufactured by Simrad or a KN205F night sight of the same company with image enhancement. The sight allows you to adjust in the process of aiming operator error.

For the grenade launcher Pzf 3 also designed a computerized sight with a laser rangefinder. This sight automatically measures the distance to the target and determines the aiming point. The reaction time — from the moment the target is detected to the shot — is 3-4 seconds. The Pzf 3 grenade launcher with a computerized sight provides the likelihood of 0,9 being hit when firing at a stationary or moving target at a range of 600 m. This sight is mounted on a grenade launcher on standard seating for an optical sight.

Tests by shooting a package of armor plates imitating the armor of the T-72 tank confirmed the high armor penetration of the warhead: when it hit the frontal armor of the turret of the tank, a cumulative jet pierced its back wall.

Grenade Pzf 3 adopted by the armies of Germany, Switzerland, Poland and the Netherlands.

Panzerfaust ST (Pzf ST). Alteration of the Pzf 3 grenade launcher in the Pzf ST was caused by the increased armor protection of combat vehicles and the equipping of tanks with dynamic armor. The issue was resolved by Dynamit Nobel specialists using a tandem-shaped cumulative warhead equipped with two independent contact fuses with a specified time delay. When hitting the target, cumulative charges are exploded at an optimal distance from the barrier. A feature of shaped charges is the impossibility of detonating one charge when another is detonated. When hitting the target, the first charge destroys the dynamic protection, and the second pierces the main armor.

Currently, the Panzerfaust ST anti-tank grenade launcher has been adopted by the German army.

Panzerfaust 3-T 600 (Pzf 3-T 600). The Pzf 3-T 600 anti-tank grenade launcher was another modification of the Pzf 3 grenade launcher and ensures the defeat of moving targets at ranges up to 600 m with a probability greater than 0,9.

The principal difference of this model from others is the presence of a computerized sight with a laser range finder. The sight provides measurement of the distance to the target, a certain angle of lead, taking into account the parameters of the wind and the output of ballistic data on the display screen. This sight is mounted on a reusable launcher and can be used with all modifications of the Pzf 3 grenade launcher.

The reaction time Pzf 3-T 600 from the moment the target is detected, captured and fired is 3-4 seconds.

Panzerfaust 3LW (Pzf 3LW). One of the modifications of the Pzf 3 grenade launcher was the Pzf 3LW, developed by the TTT rapid reaction units of the German army.

Compared to the Pzf 3, the Pzf 3LW grenade launcher is equipped with a 90 mm warhead with 500 mm armor penetration, a simpler firing mechanism and a lighter starting container. In addition, changes have been made to the design of the mount of the optical sight. All this has significantly reduced the mass of RPG and its cost.

Grenade launcher Bunkerfaust 3 and its launcher

Pzf 3LW-HESH, retaining all the advantages of the Pzf 3 grenade launcher, was able to fire from closed positions, thanks to a simple reusable trigger mechanism, a lighter plastic tube and a special optical sight. The weapon is equipped with a high-explosive fragmentation warhead, under the action of which a hole with a diameter greater than 800 mm is formed on the concrete wall.

Training and training facilities for operators. Experts of the company Dynamit Nobel are convinced that the effective use of Panzerfaust 3 grenade launchers is impossible without the training of operators of these weapons in conditions close to combat.

To meet these requirements, the company has created a training device for 7,5 mm and 18 mm cartridges, which accurately simulates the shooting of this weapon with its accompanying effects. Grenades in inert equipment are also supplied for training in shooting a grenade launcher and reducing the cost of a shot to the army. At the same time, the German army is equipped with various types of simulators and computer systems, allowing to train operators without firing from the sample.

An important design feature of the Panzerfaust 3 was the unification of combat units and their interchangeability. The grenade launcher can be equipped with cumulative warheads caliber 125 mm, 110 mm, 90 mm, high-explosive fragmentation warhead caliber 90 mm, in the caliber of standard warheads - practical, smoke with infrared screening additives, smoke, multipurpose and lighting ammunition. Replacing warheads can be carried out in the field without the use of special tools.

In conclusion, it can be stated that the armies of foreign countries are equipped with modern anti-tank defenses of the near-abroad line, Panzerfaust 3, adopted by the German army in 1985, can serve as a typical example.

The main feature of Pzf 3 is the creation by the manufacturer of this project of a whole family of grenade launchers (9 models), each sample of which is designed to solve a wide range of tasks. The weapon is equipped with various warheads caliber 110 mm (regular cumulative and tandem), 90 mm (cumulative or high-explosive), 110mm (to destroy long-term fire facilities). The firing range of the grenade launcher is 600 m, the armor penetration rate is more than 700 mm with the probability of hitting the 0,9 target. 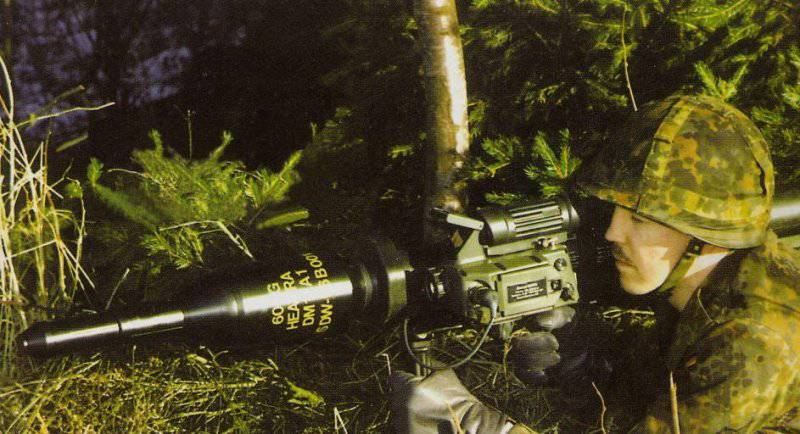