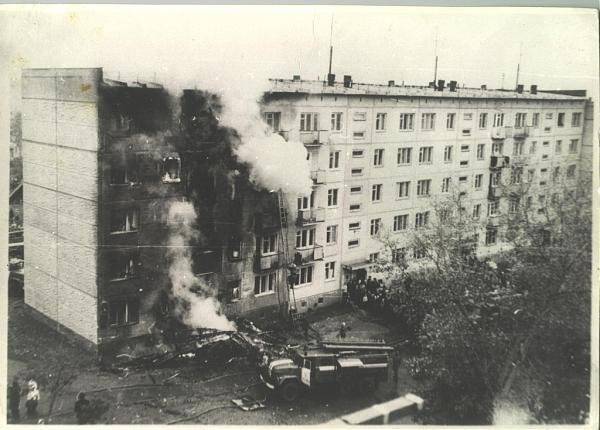 An early autumn morning on September 26, 1976 in the city of Novosibirsk aviation catastrophe. The pilot of the West Siberian Civil Aviation Administration, 33-year-old Vladimir Serkov, made a deliberate collision of an An-2 aircraft with a five-story residential building.


On a Sunday morning, pilot Serkov made an unauthorized takeoff on an An-2 plane (USSR USSR-79868 registration number) from one of the taxiways of the Novosibirsk-Severny airport. In the plane he was alone, there were no passengers. A few minutes later, An-2 appeared at the other end of the city in the area of ​​Stanislavsky Square. For some time the plane circled over the city at low altitudes. He even shot down several television antennas on some buildings. At 8 hours 20 minutes the pilot sent a light aircraft to a residential building located at Stepnaya street, 43 / 1. As a result of the ram An-2 rammed the front of the house between the third and fourth floors in the stairwell area, breaking a hole in the wall about 2 m in diameter. The aircraft engine flew into one of the windows directly into the bedroom to the residents. The remains of the tail and fuselage remained lying at the access door (where it was). Aviation gasoline from broken fuel tanks spilled out and caused a strong fire. Serkov died at the moment of hitting the plane about the house, his head was blown off. Four residents of the house, someone under the rubble, were killed, others crashed, jumping from the upper floors, escaping from a fire, or from burns. Died: Galina Degtyareva, Alexander Tyapkin, Oleg Tyapkin and Yegor Pushenko. 11 people were injured - 4 people are heavy, 5 - moderate, 2 - light.

Initially, a panic began, frightened tenants jumped out of their apartments and rushed around the yard. However, rather quickly, people from the neighboring houses got organized, and began to try to save people from the entrance that was filled with fire. Soon, firefighters who arrived at the crash site joined them. So, when a baby was dropped from the fifth floor, people standing below could catch it. After 57 minutes, the fire was extinguished.

As the investigation showed, the ram was intentional. The cause of the attack became the pilot's personal motives. After a family quarrel, his wife left Serkov, taking their child with them. Tatiana settled in the apartment of her parents. The young pilot (1953) was trying to make up, but his wife's parents turned her spouse against her husband so much that she even refused to talk to him, to let her see her 2-year-old son Roma. When he came, Tatyana's father chased away his son-in-law. The final break occurred when the wife said she was ready to file for divorce. Vladimir and Tatiana were handed subpoenas for September 30. Divorce meant not only the end of the family, but also a career - the young pilot was expecting a promotion: he had to fly a large passenger airliner.

Vladimir Serkov was distinguished for his excellent piloting skills and was appreciated by his superiors. He was an educated man, an athlete, played football well, had the title of master candidate in artistic gymnastics. Despite the good personal characteristics and technical skills, Vladimir Serkov, apparently, was a morally weak person who could not stand the heavy family drama. In addition, the investigation revealed diseases of the nervous system. In 1971, he had an epileptic seizure, twice he suffered domestic head injuries. After that, according to his wife, he often complained of a headache. But Serkov carefully concealed his problems, fearing withdrawal from flight work.

On the last day before the ram, the tenants of the house saw Serkov pacing the distance from the windows of the house to a large tree that grew directly opposite. The pilot wanted to send the plane to the apartment of his wife's parents, but he had to evade a large poplar, and the plane hit the entrance, which saved many residents from dying. It should be noted that Serkov’s relatives were not at home at that moment. Father-in-law with the mother-in-law spent the night in another place. According to the neighbors, they feared the vengeance of Vladimir Serkov, who repeatedly threatened them and allegedly even named the exact time when he would take revenge.

The commission investigating the causes of the accident, concluded that Serkov’s neuro-psychological instability was the immediate cause of the emergency. Contributed to the incident: 1) mistakes of the command and management personnel of the Novosibirsk airline, which did not pay enough attention to studying the moral and volitional qualities of subordinates, their interests and inclinations, the situation in the family; 2) insufficient work among the personnel to increase vigilance, responsibility, to observe the existing rules of the regime; 3) violations in the field of pre-flight medical control, poor study of the psychophysical characteristics of pilots; 4) violations in matters of pre-flight preparation, reception and transfer of aircraft, etc.

Interestingly, for 22 year before the ram Serkov exactly the same attempt to attack a residential house and also because of the family drama was made by another person. In the same Novosibirsk, due to the betrayal of his wife, flight engineer Polyakov hijacked an IL-12 aircraft. A mechanic planned to ram that apartment, where, as he supposed, his wife was cheating on him with her lover. Polyakov made several visits to the house. But he could not strike. It was deep in the night, and the luminous spots of the windows disoriented him, he could not determine what was needed. The authorities began negotiations with him on the radio, and the jealous man agreed to land the plane and surrendered. The sentence was rather mild, he got off with three years of imprisonment. 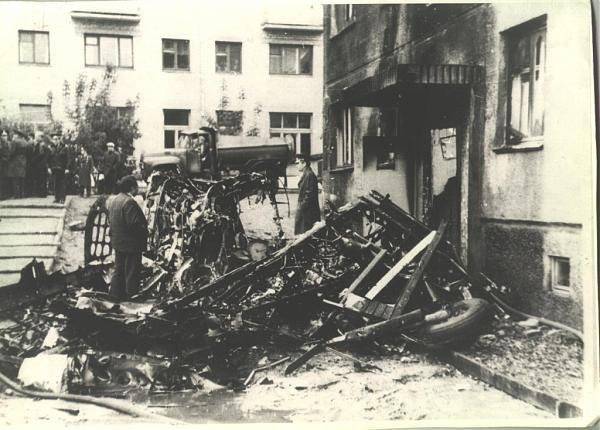 Ctrl Enter
Noticed oshЫbku Highlight text and press. Ctrl + Enter
We are
Ramming a residential building in NovosibirskAir ram is not only a weapon of Soviet heroes
Military Reviewin Yandex News
Military Reviewin Google News
40 comments
Information
Dear reader, to leave comments on the publication, you must to register.