Decommissioning BZHRK was a mistake

25 September 2013
37
To justify this decision, the former command of the Strategic Missile Forces


In the 34 number of the weekly MIC, a message was published in which the opinion of Colonel-General Nikolai Solovtsov, the former commander of the Strategic Missile Forces, regarding the prospects of combat railway missile systems (BZHRK returning, but they will be different) was published, where he pours crocodile tears about 90 destruction under US pressure Russian BZHRK.

The Americans, you see, first achieved from the Russian authorities that the BZHRK did not skate around the country, but stood on the joke, and then persuaded Russia to finally destroy these complexes. But after all, Solovtsov was the initiator and the main driving force of their withdrawal from the combat composition of the troops and gradual utilization.

The official reason for the removal of the BZhRK with weapons was the outdated design, the high cost of recreating the production of complexes in Russia (initially they were made in Ukraine) and the advantages of mobile launchers based on wheeled tractors. 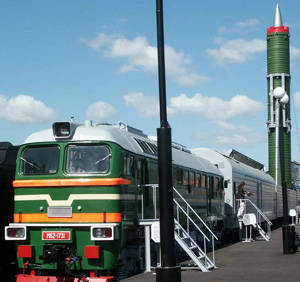 According to Nikolai Solovtsov, the withdrawal of the BZhRK from the Strategic Missile Forces was caused by the fact that the complex has developed its resource. “It is unacceptable to maintain armed missile systems with a developed resource. With nuclear weapons you can’t joke, otherwise you won’t get into trouble, ”the general stressed.

PC-20A - no less old rocket. Her tests and combat duty were performed almost simultaneously with the PC-18B. It was made, as well as "Good work", in Ukraine. PC-20А was constantly being upgraded, its service life after combat training and commercial launches (conversion Dnepr "Dnepr") was repeatedly extended. Nevertheless, it can be assumed that the relatively new version of the PC-20В (Р-36М2 "Voevod") was adopted at the same time as the "Good fellow" and now amounts to half of the heavy Russian ICBM faction. The maximum extended life of all PC-20s will expire around the year of 2020, unless it is renewed again. Thus, "Well done" is no older than the "weave" and "Satan".

Solovtsov also stated that the refusal of the railway complexes would be compensated by the introduction of mine and mobile bases into the combat strength of the new Topol-M missile system.

Well, today the advantages of mine-based to the mobile at first glance are quite obvious. The survival rate of the first under conditions of a nuclear strike is much higher. For the destruction of one ICBM located in the depreciation system of the mine, at least two nuclear warheads will be required, and delivering to the target with high accuracy, and when defending a positional area with missile defense systems — even higher.

The mobility of mobile Topol-M is limited to a certain radius around their main base. It would be naive to think that with modern means of space reconnaissance, a metal object with a length of more than 24 meters, a diameter of about 3,5 and a height of almost 5 meters, besides emitting a large amount of heat and electromagnetic radiation, can be hidden.

The ramification of the railway network provides BZHRK in comparison with soil complexes greater secrecy. At one time, when the Americans planned to build their own railway complex, they conducted special studies. It turned out that when 25 dispersed trains, twice the number of complexes that Russia had in service, on the railway section 120 thousands of kilometers long (this is much less than the main route of the Russian railways), the probability of hitting the American BZHRK with 10 Russian ICBMs of the “Voevod” type.

If we take into account some weighty reason for the refusal of combat railway complexes by the Russian military leadership, then these are large financial costs for their operation.

From the announced plans for the production of Topol-M ICBMs, it is not difficult to assume that by 2015, only two missile divisions will be armed with 54 - 76 mobile launchers and XNUMX mine. Is a retaliatory strike possible after the raid of hundreds of “Minutemen” and is it not too wasteful that we unilaterally reduced our nuclear missile potential?

Preserving, even with upgrading and testing, 36 BZHRK launchers with missiles, each of which carried 10 warheads exceeding 25 – 27 power once dropped on Hiroshima, despite all possible collisions, would be far from worse (by criterion "Cost-effectiveness") option. At least he would not mean the destruction of some quite combat-ready missiles against the background of the need to accelerate the production of others.

Recall that BZHRK was accepted for trial operation in February 1983 of the year, that is, 30 years ago. Without a doubt, its creation was an impressive victory for the domestic defense industry. Nowadays, this weapon system would be far from superfluous.