The clarity of the training battle 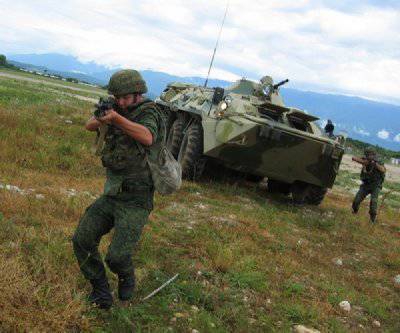 7-I Russian military base - the connection of immediate use. This leaves an imprint on the process of combat training in its units. Practically at the same time, field exits of battalions, divisions and special units of the base are held at the three training complexes of the firing range. Moreover, the intensity of such classes is also due to the special task of connection today - ensuring the safety of test competitions at the Olympic facilities in Sochi and the Winter Olympics themselves. The Russian military in Abkhazia has been assigned a specific task - from the southern boundary of the Sochi-2014 Olympics, nothing should threaten.

“Tactics is a serious and fairly regulated science,” said Lieutenant Colonel Ivanov. “But in each military college, she is taught differently, plus the future officer also understands it in her own way. And even then, in the troops, where in each unit, the battalion, there are already traditions and approaches to the tactical training of officers and soldiers, the individual characteristics of each of the unit commanders may well affect tactical thinking and actions on the battlefield. Character, temperament, habits and even mood make themselves felt. In the direct competition of bilateral tactical exercises, all this is manifested most clearly.

This time in the training battle rivals were the commanders of the motorized rifle companies, captains Magomed Mirzayev and Vladimir Shibunov. On the eve of the exercises in the units, control classes were held on fire and engineering training, communications, protection from weapons mass destruction, which allowed not only to determine the level of readiness of each soldier for training combat, but also to refresh the motor skills of combat skills. In addition, assessments for performing control shooting exercises were included in the overall score for tactical exercises, which, by virtue of a bilateral nature, did not include the stage of combat shooting.

Subordinates of Captain Mirzaev gnawed defense in the ground petrified under the sun right from the march. Disguise positions in the conditions of the scorched heat of the plain is not easy. Each withered blade of grass becomes an improvised means of masking. But the company commander understood that in the way of the likely onset of the “enemy” it was precisely the secrecy that would help to gain precious time and distance for delivering an accurate strike. He especially took care of choosing the optimal position for his fire reserve - attached to the grenade-throwing squad. During the organization of past combat firing platoons, Magomed Mirzaev drew the attention of platoon commanders to the effective use of collective weapons of subunits - machine guns and grenade launchers, especially on their timely maneuver when the situation on the battlefield changes. And now he was counting on the use of such skills by his subordinates.

Captain Shibunov's motorized riflemen fell on this day, in fact, the opposite, but no less difficult in content, to act in an offensive in an open area. It was here that the science of the battalion, dictated by the experience of the Chechen war, came in handy to the company executive: an emergency reconnaissance unit should be well prepared in each company. As the first minutes of the promotion of the tactical scenario of the exercises showed, this department knew its task well. Troika intelligence officers were able to use even the most insignificant folds of the terrain in order to secretly get to the front edge of the “enemy” defense and reveal the main elements of building its strong point. Intelligence reports helped Captain Shibunov to uncover a rather clever defense scheme in the zone of his offensive. Particularly worried flank location of machine guns, which could cause considerable damage to his company in a foot attack. The decision made with the help of an automated tactical level control system made it possible to act in several ways in the event of a situation change.

“Bilateral tactical exercises are a high visibility of the actions of both the commanders and their subordinates,” commented the battalion headquarters chief lieutenant Sergey Kovalev on the course of the training battle. - The speed of making a commanding decision in a dynamic environment, and the speed and accuracy of its implementation in the actions of each fighter are also taken into account. The tactical intermediaries in the companies, the deputies of the battalion commander, Major Sergey Khramkin and the captain Anatoly Greblev, not only evaluated the entire complex of combat use of the subunits, but also brought him closer to the conditions of the real combat with timely introduction tasks.

And the introductory were different: from the air raid of the "enemy" to the loss of the company commander. And each time the inexorable stopwatch hand and the gaze of intermediaries clearly verified the combat skills of the motorized infantrymen in the intense dynamics of the training battle. It took literally seconds for Senior Lieutenant Anvar Tagirov to replace the conditionally disabled company commander, and junior sergeant Ruslan Sharipov to take command of the platoon in such a situation. It should be noted that the training of commanders one step higher than their position at the 7 military base is an indispensable element of combat training. According to the commander of the formation, Major-General Yakov Rezantsev, this will affect the survivability of the units in real combat, and in the process of studying it will develop the readiness of commanders of all levels to take increased responsibility.

In the situation of the real maneuver of the "enemy" in bilateral tactical exercises, the ability is developed for the precise and most efficient use of small battalion artillery by commanders of motorized rifle companies - attached mortar and rocket launchers. Both Captain Mirzaev and Captain Shibunov competently took into account the possibilities of using these fire weapons in defense and offensive. Of course, this required the same lieutenant battery Senior Lieutenant Yevgeny Mullin considerable effort in the course of frequent and rapid change of positions, quick preparation of data for the shooting, a clear correlation of actions with motorized infantry. But for them it also became a very clear training in their combat mission.

There is a modern military tactics and technical component. Electronic plates of the automated control system of the battlefield, digital communications, surveillance devices, well-equipped with high armored personnel carrier - all this for effective use in battle requires not only knowledge of all the tactical and technical parameters, but also well thought-out options for their most successful use. It was these nuances that helped captain Vladimir Shibunov and his subordinates at some point to seize the initiative in a training battle. And this led them to victory. But in reality, in a bilateral tactical teaching of motorized rifle companies, which also captured night time, the well-structured system of field tactical training of subunits won, which can be considered to be branded for the 7 of the Russian base in Abkhazia.

Ctrl Enter
Noticed oshЫbku Highlight text and press. Ctrl + Enter
We are
Innovation Day of the Southern Military District: Pictures from the ExhibitionThe action “Military service under the contract is your choice!” In Rostov-on-Don: future contract servicemen, exhibitions and “Russian Knights”
Military Reviewin Yandex News
Military Reviewin Google News
4 comments
Information
Dear reader, to leave comments on the publication, you must to register.