The myth of the Finnish machine gunners 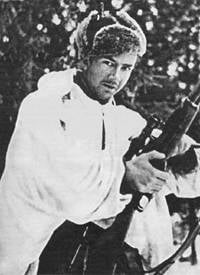 B. V. Sokolov writes: “Machine gunners, later called“ cuckoos ”, camouflaged with white robes and settling in hammocks suspended between snow-covered pines, met the Red Army with an avalanche of fire, while they themselves remained hardly vulnerable, as our soldiers, armed with rifles and light machine guns and deprived of cover, were in a worse position. Of course, the surprise factor in such attacks was of great importance, but the advantages of the submachine gun became more than obvious. And then there was a very sharp turn in the views of our military regarding this. weapons. Moreover, some people tried to cover up their mistakes, which caused a tense situation on a number of sectors of the front, just the lack of machine guns. ”

With such a description, you can shoot action thrillers - Finnish machine gunners, in hammocks, on pine trees, in the cold. It is a pity the Finnish military did not think of it.

In fact, the offensive of the Red Army divisions was stopped by the long-term firing points of the “Mannerheim Line”, with the Maxim 7,62 mm machine guns, which hit the squares with thousands of rounds. But the Red Army, like the Wehrmacht in France, will find methods for breaking into the fortified bands.

Tales about companies, battalions of Finns armed with machine guns, are the same “fairy tale” as the divisions of German machine gunners.

The Soviet infantry regiments were armed with more automatic weapons, so the light machine guns in the Soviet regiment were 142 (in Finnish 72), which made it possible to create a greater density of fire.

Submachine gun Suomi M31 with drum magazine on the 71 cartridge. 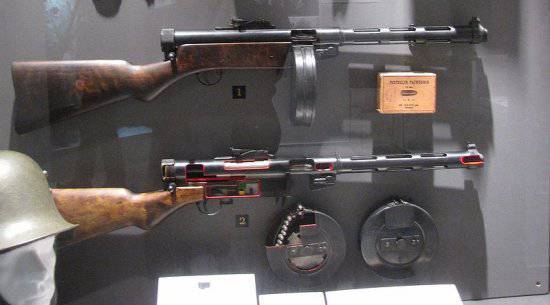 Submachine gun Suomi with a magazine on 70 cartridges.

Suomi M32 submachine gun (option for installation on tanks or in pillboxes), a short magazine for 50 rounds.