One shot - one goal 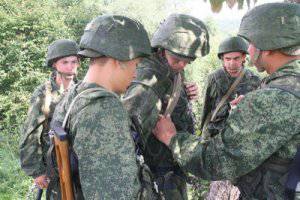 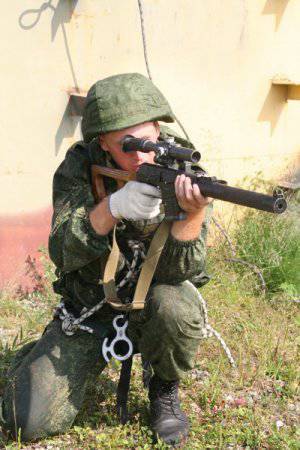 The usual practice of conducting classes, when units are simultaneously located at different training points, is used everywhere in the army. This eliminates the "simple" military, until they reach the turn to perform a specific exercise. So the rifle company (snipers) of captain Vyacheslav Barkov was engaged on that day at several training places: at the climbing gym, the mountain obstacle course and at the water barrier located near the point of permanent deployment.

“We have such knees on our knees, we have such mountains on our shoulders,” rank-and-file Alexei Biryukov, humming a song in his own way, was humming to himself, waiting for his turn to “storm” the climbing wall in the gym. The nearby namesake and countryman from Don, Private Skorobogatov, smiled skeptically.
- What, you do not believe that I will get to the ceiling without stopping? I will leave you, Lech, far behind, - soldier dispersed. 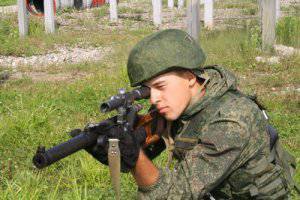 “Do not forget about security requirements,” the squad leader junior sergeant Ivan Sudarkin, who at that time was on the insurance of his subordinates, cooled the fervor of the debaters. Ivan also called from the Rostov region. And the character of both Alekseev knows better than others. The desire to prove that you can do something better than your comrades is a good help in the service. Command even encourages a competitive spirit. The main thing is to do everything with the mind. Then the soldiers will not forget about “undercurrents” even for a second. Therefore, the squad commander before each new “race” to the gymnasium reminds of the observance of the textbook truths of the mountain workers. His mentor tone does not bother anyone, although before commencing his classes, the platoon commander, Lieutenant Nikita Pichuyev, reminded the servicemen in detail all the nuances of training on an artificial rock and carefully checked their ammunition. The height intended for conquest is only a few meters. In addition, mats are laid down for additional insurance. In the mountains this will not happen. And you need to get used to this long before the servicemen go to practice on the rocky massifs. 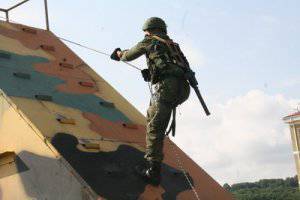 Ordinary Biryukov and Skorobogatov came to the “top” at the same time, setting their tone for the rest of the snipers with their speedy rise. Other servicemen, ordinary Andrei Kuznetsov and Dmitry Novoseltsev, were equally confidently guided with mining ammunition.

“For the first time I saw mountains near here,” admits Dmitry, who was born and raised in the Volgograd region. “We have only steppe around.” But I already feel confident when climbing up to a height on my own.

Before the “guy in the mountains to take the risk”, with each of them experienced officers and mountain training instructors master all the necessary aspects of climbing. The servicemen learn to knit different knots themselves, because for each exercise, one knot fits better, while others do not fit at all. In addition, the soldiers are studying climbing equipment. It seems that Zhumar is just that (a special device for descending and ascending), but in order to use it as efficiently as possible, it is necessary to conduct more than one theoretical and practical exercise. 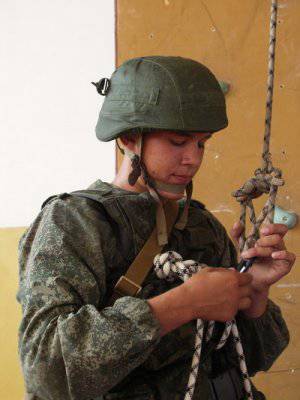 Climbing lessons with the "mountain workers" are not limited. The mountain obstacle course is another important element of the practical training of servicemen who will act in the foothills and mountains. A whole complex of various obstacles has been created here, overcoming of which imitates the performance of tasks in a mountainous and wooded area. Under the leadership of the contract commander of the junior sergeant under the contract, Mamedbek Aliyev, servicemen who had only recently entered the unit mastered the technique of passing difficult obstacles. For this we need strength and dexterity, and skill.

- From the first time there is nothing even to think about keeping within the standard. At first, it is important to just go through the entire strip, the contract soldier explains.

Even to him, a professional, it is not easy. After all, Mamedbek himself signed his first contract not so long ago, and he served in conscription in Siberia, where the area was, though covered with forests, but flat.

The successes of the soldiers engaged in the mountain belt are obvious. Many factors affect. Including the fact that for service in the brigade is carried out especially meticulous selection. Most of the soldiers were friends with sports long before the draft, many of them had sports categories. It helps in serving in such a specific unit. 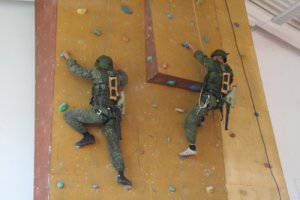 “The educational and material base of our unit is structured in such a way that in the RPM and near the brigade to work out most of the training issues,” commented the company commander, Captain Vyacheslav Barkov. - And this means that every day for our servicemen is extremely full of classes that are useful for enhancing their professional training. And you do not need to spend precious time on the movement from one educational object to another.

Snipers are very proud of the fact that they have a company 2 rank in mountaineering and combat experience. The commander generously shares his knowledge and skills with his subordinates. Everyone knows that he is not a supporter of oversimplification. Any lesson will necessarily be filled with introductory exercises that bring the training closer to real actions when performing a combat or special task.

For example, when climbing a cliff, it is not always possible to install a station. This is remembered during class. So, it is necessary to rise without habitual "railing". But even in this case, the servicemen do not believe in the saying that “an intelligent person will not go uphill”. To successfully solve a problem, it is often necessary, despite any difficulties and dangers, to go uphill. Go, correctly, according to the rules. Soldiers from a rifle company (snipers) are constantly learning this. Including when following on the ground. It is only a few kilometers from the point of permanent deployment. But what! Snipers are constantly working out the tactics of action in different situations. And again, a string of introductory - from the loss of the commander to the tricks from the enemy. Overcoming hilly, rugged ravines, the area also carries its practical load. Movement along the grassy slopes, descent and ascent with the use of an ice ax - only a few are at first able to. But after a few lessons the servicemen confidently use different methods of the course: “head on,” “herringbone” or “zigzag”. 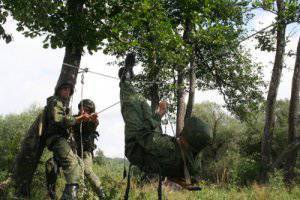 Another training point where personnel work to overcome water and other obstacles. And again, mining equipment is involved.

- We regularly hang out on the ropes, as hung out for drying clothes, - the servicemen are joking.

However, when performing these exercises aside, all is very serious here. In the area where the personnel of the subunits of this mountain brigade have to work, obstacles in the form of a mountain reservoir and crevices are found at every step. To be able to overcome them is a prerequisite for each military unit. And the thing is not that soldiers are afraid to dunk their feet. Many rivers running in the highlands are simply impossible to ford. And here the skills acquired during regular classes will be useful.

At first, the miners learn to properly install the ropes, through which people, ammunition and property are transported. And it is not necessary that a real natural obstacle be under the trainees. Even for the first time, one and a half meters below is the saving soil. But the soldiers confidently move on the "rope viaduct." The exercise was successfully performed at the beginning by private Vasily Anosov, then ordinary Artur Petrov and Roman Shevchenko. They had to move independently along the rope stretched between the trees. But Private Dmitry Kurylev portrays the wounded man - colleagues send him through insurance.

“You have to be ready for anything, so the exercises are often complicated,” explains the squad commander, junior sergeant Alexander Bozhko, who controls the correctness of the air services performed by subordinates.

Private Denis Yankovsky has already served about 9 months. It seems that this difficult task is very easy for him. 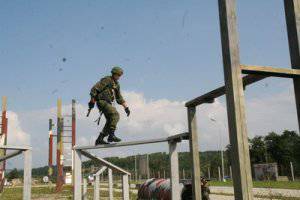 - It only seems. In fact, the crossing of the barrier is very difficult. It helps the skill - we regularly work out this exercise, sometimes several times a week - gives us the secrets of the skills of the soldiers.

But a sniper is a sniper. And first of all he needs to perfectly master the special small weapons. There are several types of rifles in service in the sniper unit: SVD-S and VSS. And the almost complete lack of a limit on ammunition.

Before it hits the target, each soldier shoots his weapon. And then performs various fire tasks. There are also a lot of professional secrets. Their chief custodians are officers. Commanders generously share their skills. The result - good results in the defeat of targets in subordinates. Private Alexander Zapatotsky from 8 shots knocked out 79 points. 7 hits in the "apple" is worth a lot. But before going to the firing line, the soldier, together with his comrades, made a forced march, having overcome several kilometers in full gear.

- Excellent weapon - it falls by itself, - Alexander smiles. 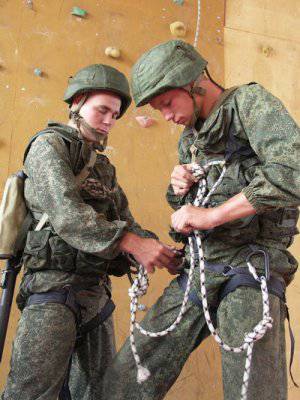 And then he begins to quote the rules from the lessons with the mark of shooting, which the commanders taught to the snipers from his squad. After all, in order to deftly pry the plywood opponent, a lot needs to be taken into account: to make corrections to the wind and the movement of the object, not to forget about the humidity of the air and its temperature, to accurately determine the distance. The work in the mountains also carries its nuances, where the rules of aiming are noticeably different from the actions on the plain. And still need to hold his breath, gently pull the trigger. When meeting with the real enemy, these calculations and actions should be made “on the machine”. However, this is not all sniper specificity. Servicemen of company snipers work out tactical operations in pairs. Unobtrusively and extremely close to the object, to hide from his eyes, not to give out anything while waiting for “H time”, and after the shot, safely go back home - all this is also the verge of sniper skill.

For the past two years in a row the rifle company (snipers) has been the best division of the brigade. She is also among the best in the 49 Army Combat Army of the Southern Military District. The occupied mountain-level snipers are not going to surrender to the occupied height anymore. Moreover, the way ahead is to fulfill a serious task set by the Supreme Commander of the Armed Forces of Russia to military units and formations deployed in the North Caucasus to ensure the security of the facilities of the Sochi Olympics.