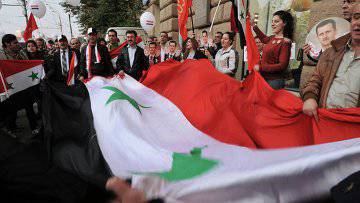 Chemical weapon in Syria was the reason for the large-scale changes in the balance of power around the world? It is precisely this impression that has emerged in recent days with many observers and the media. The “retreat” of Barack Obama and Francois Hollande in the matter of military intervention and the diplomatic consensus proposed by Vladimir Putin put Russia at the center of attention. Perhaps she becomes a new "world gendarme"?


“The retreat with his head held high - this is how Le Figaro described the support of France and Germany to Russia's proposal to transfer the Syrian chemical arsenal under international control with its subsequent elimination:“ In some cases, the art of diplomacy is to save a person. The fighters Barack Obama and Francois Hollande with amazing speed seized upon the opportunity offered by Russia. But can you blame them for it? Even in the end, all this will turn out to be a dry and dead branch, it is enough to get out of the quagmire in which they found themselves to be their own fault. ”

Putin hurry to help the West

11 September, when the Americans and the French accepted the principle of a sweetheart agreement to "punish" the regime of Bashar al-Assad, who in the West is accused of chemical attack 21 of August, the French press in one voice dubbed the reaction of Paris and Washington "retreat".

“The idea proposed by Putin makes it possible in the first place to unclench the clutches around Damascus and weaken the already shaky determination of the French and American commanders,” writes Libération. “Putin understood very well that Obama could take his proposal as an opportunity to save face in the face of non-acceptance of the operation in Syria in public opinion and indecision in the US Congress.”
“Putin made a brilliant move,” says Le Midi Libre. - He not only strengthens Russia's position in the political game in the Arab world, but also suddenly becomes the savior of the world who did not allow war. It is difficult after this to seriously consider the use of force. In addition, sincere this initiative or not, but it was approved by the main actors. "

When the West goes through the back door, through the front comes to someone else, and in the Syrian issue Russia (perhaps herself unwillingly) workshop held true combination.

The West behaves extremely belligerently and is not ready to negotiate with the “monster” Assad. And then peace-loving Russians appear at a crucial moment with a compromise in their hands, which, as soon as Foreign Minister Sergei Lavrov presents it to the public, admires all the actors, starting with the Secretary-General of the United Nations.

Everyone seems to forget that the game of Russia from the very beginning of the conflict was invariably aimed at finding a political solution ... But what difference does it make? Russia emerged victorious from a duel with the eternal American enemy. The balance on planet Earth is shifting to the east, and the cards are going to a new distribution. The last few days, the media are actively discussing the new trend: will Russia become a new world gendarme?

Russia has no imperial ambitions

The site Rue89 tried to give an explanation for the sharp rise in the power of Russia, which in just a few years had overcome the path from the thaw to diplomatic victories. Astounding история Vladimir Putin, a former KGB officer who has been at the head of this mysterious Russia for 13 for years, “including the period when he was Prime Minister Dmitry Medvedev,” Rue89 said. To reach a key position, "which belonged to the country during the Soviet period (...), the Russian president relied on three main points: an aggressive foreign policy, an authoritarian domestic policy and a strong personal image."

Nevertheless, as Rue89 notes, “Vladimir Putin is not driven by the imperial ambitions of the USSR, and he does not export the social model. There are no former opportunities at its disposal when the Soviet Union supported the Cuban revolution, the African and Asian regimes, and wiped the United States in the nuclear field. (...) However, Boris Yeltsin’s successor became the author of the “Russian Renaissance”, establishing a number of new alliances: with still communist China, with the developing BRICS powers, such as Brazil and India, and states that are rising against the new world order with the American domination ".

Today, Russia offers a new path, different from democratic imperialism and the West-centric world order. “In part, this strategy is built on an anti-American and generally anti-Western stance,” writes Rue89. As noted on the site, this strategy made Russia "a natural ally of all those who believe that the domination of the West has dragged on too long, and that its weakening after the 2008 crisis of the year represents a long-awaited opportunity to put an end to it".

Whether it is about restoring the power of Russia in the international arena, which underestimated France and the U.S.? This is the conclusion Rue89. In any case, in the Syrian issue Russia offered a way out of the impasse, writes in his blog Ryufol Ivan (Ivan Rioufol):

“Barack Obama and Francois Hollande had nothing to do in this civil war, because their intervention threatened only to complicate the lives of the Christians protected by Asad. Both of them owe much to Vladimir Putin, who on Monday offered to transfer the illegal Syrian arsenal under international control and thus made the prospect of military strikes unlikely. ”

"This turn of events turns the Russian president into a peacemaker and seriously strengthens his position towards the United States,"
- emphasizes the journalist, predicting "a change in the balance of power in relations between Russia and the West."

Be that as it may, in the first place “the fiasco of the Franco-American adventure means the end of the rule of the West in the international arena. If you think this is even for the better. The rise of the developing powers means that the West is no longer alone in the world. The US must give up its claim to the status of a world gendarme. As for France, it needs to recognize that its capabilities no longer correspond to the dreams of greatness. The punitive expedition was really just a snag, designed to conceal the strongest internal weakness. The priority of the West today is not to disperse its strength, but, on the contrary, to restore them on its own territory. ”

So maybe the new cold war is starting? This is the question that the Lebanese newspaper L'Orient Le Jour raises.

“Everything leads to just such a thought. Russia is no longer a “colossus on clay feet,” but a full-fledged power, which is experiencing a boom and strengthens its position in the international arena, the newspaper writes. - It has become noticeable by no means now. (...) It was possible to start with an analysis of international relations in which the United States ceased to be the only superpower, along with their European followers. The confusion of the United States is due to the fact that they now have to share the world with another bloc, the BRICS, of which Russia is the cornerstone. ”

A multipolar world is taking shape on our planet, says L'Orient Le Jour: “In the future, it will be impossible to do anything without taking into account the position of Russia and BRICS. The new world order, of course, does not like the United States, because they are no longer the absolute master in the world and can not act on the international arena without taking into account the interests of the gaining powers. ”

"America is above all"

But how will the Americans accept this “new world order”? Someone succumbs to nostalgia, and someone on the contrary pragmatically approaches the situation.

La Voix de la Russie quotes American politician Patrick Buchanan, who on the eve of the 2012 elections of the year noted that America no longer needs “neo-imperial nonsense”

“Our country is embraced by biblical complacency. America needs a new foreign policy that is based on the realities of the modern world, and not the remnants of the Cold War and the dreams of democracy, he said. - We need to again be guided by the slogan "America is above all." For us, it does not really matter what is going on in the rest of the world, because we must adhere to enlightened nationalism. ”

Ctrl Enter
Noticed oshЫbku Highlight text and press. Ctrl + Enter
We are
Geopolitical mosaic: Western journalists discovered Machiavelli in the service of Putin, and Obama was advised to take an example from Don CorleoneResults of the week. “A smart face is not a sign of the mind”
Military Reviewin Yandex News
Military Reviewin Google News
41 comment
Information
Dear reader, to leave comments on the publication, you must to register.