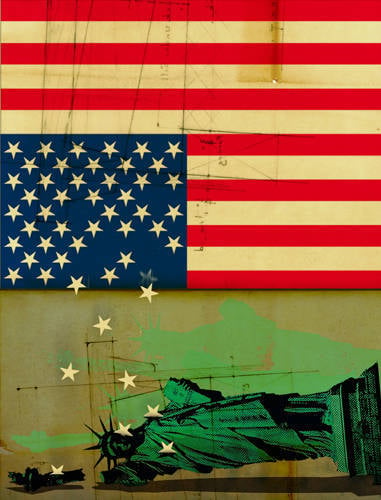 All the last three hundred years of the evolutionary progress of the European race have been reduced to just four words: self-love, bloodshed, shamelessness and venality.

It took no more than three hundred years for the rest of the world to see through the evil that impersonates “Western civilization”. Or, it can be said, for this it was required that new powers emerge, with confidence to state the obvious. Anyone who doubts America’s responsibility for evil should read “The Untold history United States "Oliver Stone and Peter Kuznik.

The New American Century, which the neoconservatives proclaimed, approached the abrupt end of September 6 at the G20 meeting in Russia. The leaders of most of the nations of the world told Obama that they did not believe him, and the US government would violate international law if it attacked Syria without UN sanction.

Putin told assembled world leaders that an attack using a chemical weapons was "a provocation in the interests of militants who count on outside help from the countries that supported them from the very beginning." In other words, Israel, Saudi Arabia and Washington are the axis of evil.

China, India, South Africa, Brazil, Indonesia and Argentina joined Putin in a statement that a leader committing military aggression without permission from the UN Security Council puts itself “out of the law.”

That is, if you, Obama (hereinafter the author writes certain proper names with a lowercase letter; approx. Mixednews.ru), challenge the rest of the world, then you are a war criminal.

The whole world is waiting for an answer to the question whether the Israeli lobby can push Obama to the role of a war criminal. Many people say that during the week Israel will take up over the American president - a nonentity, devoid of all principles. A couple of decades ago, before the appearance of American cattle, one of the last inflexible Americans, the commander-in-chief of the Navy and the chairman of the Joint Chiefs of Staff Admiral Tom Murer announced publicly that "no American president can stand against Israel." America’s highest-ranking military officer failed to achieve an honest inquiry into the Israeli attack on the American ship Liberty.

We have not yet seen an American president who can stand against Israel. Or, for that matter, such a congress. Or the media.

At the G20 summit, the Obama regime tried to avert its crushing defeat by forcing its puppet states to sign a joint statement condemning Syria. However, the puppet states have defined their position, declaring that they are against military action and are waiting for a UN report.

Most of the “supporters” bought and paid for are powerless, powerless. For example, Obama considers Britain to be his supporter because of the personal support of her compromised Prime Minister David Cameron, despite the fact that the British Parliament, by prohibiting the country's complicity in Washington’s next war crimes, gave the Cameron a turn. Thus, although Cameron cannot bring the British people and the government with him, Obama considers the United Kingdom a supporter of the Obama strike on Syria. It is clear that such an account of "supporting countries" is dictated by hopelessness.

The Turkish puppet government, which was shooting at its citizens peacefully marching through the streets without any objection from the Obama or the Israeli lobby, is in favor of “bringing Syria to justice”, but not of course, and not of Washington itself.

The insignificance of Obama also declares support for Japan and the Republic of Korea, two more countries deprived of diplomatic influence and any kind of power. Helpless Japan is on the verge of destruction because of the consequences of the Fukushima nuclear catastrophe, for which it has no solution. In connection with the penetration of radiation leaks into the aquifer, on which Tokyo and the surrounding territories lie, Japan faces the possibility of the forced displacement of 40 to millions of people.

Saudi Arabia, involved in the transfer of chemical weapons used in the attack to Al-Nusra’s rebels, supports Washington, knowing that otherwise its tyranny is a cover. Even neoconservatives led by a shrill Obama national security adviser, Susan Rice, want to overthrow the Saudis.

Obama also claims he has the support of France and Germany. Nevertheless, both Hollande and Merkel clearly said that they first preferred a diplomatic solution, rather than war, and that ultimately everything depends on the UN.

As for the support of Italy and Spain, the governments of these countries hope to be rewarded by the Federal Reserve, which will print enough dollars to save their debt-burdened economies. It is necessary that both these governments should not be overthrown in the streets for their tacit acceptance of the plundering of their countries by international banksters. As in other Western countries, the governments of Italy, Spain, and, of course, Greece, support international banksters, not their own citizens.

The chairman of the European Commission announced that the European Union, the central overlord over Britain, France, Germany, Italy and Spain, does not support a military solution to the Syrian crisis. “The European Union is convinced that efforts should be directed towards a political settlement,” Jose Manuel Barroso told reporters at the G-20 meeting. The EU has the authority to issue arrest warrants for EU Heads of Government who are involved in war crimes.

It says that support behind a liar-obama is frail and limited. At the G20 meeting, the West lost its ability to dominate international politics. The moral authority of the West finally disappeared, broken and undermined by endless lies and shameless acts of aggression, based on nothing but lies and vested interests. Nothing remained of the "moral authority" of the West, and he himself was always only a cover for selfishness, murder and genocide.

The West was destroyed by its own governments, which made too many self-serving lies, as well as by their capitalist corporations, which took Western jobs and technology to China, India, Indonesia and Brazil, depriving the governments of Western countries of the taxable base and support of their citizens.

It is difficult to say whether citizens of western countries hate their corrupt governments at least a little less than Muslims whose lives and countries were destroyed by Western aggression, or than residents of third world countries who became impoverished as a result of robbery from predatory financial organizations of the first world.

The idiot governments of Western countries put their influence on the wind. The neoconservative fantasy of American hegemony, extending to Russia, China, India, Brazil, South Africa, South America, Iran, has no prospects. These countries can establish their own system of international payments and finance, and get out of the dollar standard whenever they want. It's amazing why they are waiting. The US dollar is printed in inconceivable volumes and is no longer considered the world's reserve currency. The US dollar is on the verge of its total worthlessness.

At the G-20 summit, it became clear that the world was no longer eager to follow the lies and bloody course of the West. The world got to the West. Every country now understands that the financial assistance offered by the West is merely a mechanism for plundering the saved countries and impoverishing the people.

In the 21st century, Washington treated its citizens in the same way that it treats citizens from third world countries. Huge trillions of dollars were generously handed out to a handful of banks, and at that time banks threw millions of Americans out of their homes and seized any remaining property of ruined families.

American corporations reduced their taxes to almost zero, leaving only a few payments and deductions. At the same time, they gave jobs and vacancies of millions of Americans to the Chinese and Indians. Together with these jobs, the US GDP, taxable base and economic power went away, and the Americans were left with huge budget deficits, depreciated currency and bankrupt cities, for example, Detroit, which was once a global industrial center.

How much is left before Washington starts shooting on the streets at its own homeless, hungry and protesting citizens?

Ctrl Enter
Noticed oshЫbku Highlight text and press. Ctrl + Enter
We are
Results of the week. “Ta-ak. Hence, we know the Russian language. Why was it necessary to hide? ”Situational analysis of the death of the MH17 flight (Malaysian Boeing 777), made on the basis of engineering analysis from 15.08.2014
Military Reviewin Yandex News
Military Reviewin Google News
69 comments
Information
Dear reader, to leave comments on the publication, you must to register.