Memory in the heart and in the stone 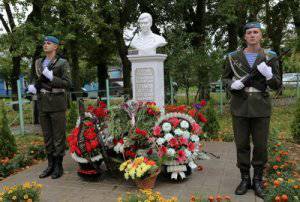 Most recently, veterans and current employees of the Department of Military Counterintelligence of the Federal Security Service of Russia opened a memorial plaque on the building of Tula secondary school No. XXUMX in honor of the Hero of Russia Sergey Gromov, the name of which was named this educational institution. The military counterintelligence captain Gromov died in an unequal battle in Grozny, covering his comrades from enemy fire. It was from Tula that he left for that last war. And so the other day in the courtyard of the school, bearing the name of a brave officer, his bust was solemnly opened. 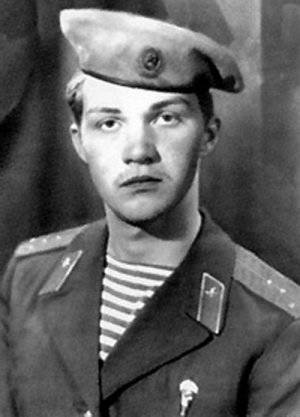 ... From the height of a small pedestal, he mischievously looks at all of us. Good look, easy smile, a strand of unruly hair on his forehead. On the open paratrooper is the Golden Star of the Hero of Russia.

This is the only thing that exaggerated the author of the composition is the Tula sculptor Yuri Uvarkin. The high title of Hero of the Russian Federation, officer Sergey Gromov, was awarded posthumously. The Gold Star is a memory left by the family of the deceased officer: mothers, Galina Alexandrovna, widows, Valentina Petrovna, and their daughters - Zlata, Gali, Nasty.

Those who personally knew Sergey, who served with him, who somehow came into contact with this person in life came to Tula for the celebrations. Everyone remembered his responsive nature, good character, and most importantly - his responsibility and dedication, the desire to always do everything right, to act according to conscience.

Galina Aleksandrovna told about how Sergei was a schoolboy who was worried that, together with everyone, he was not accepted first to the pioneers, and then to the Komsomol: he went to the first grade earlier than the others, and that’s not suitable for his age. Because of this lack of years, the boy was not taken to the Suvorov Military School, although he even personally addressed the Minister of Defense of the USSR with a request for admission to the SVU. And yet he achieved his goal - became a military man. He graduated from the famous Ryazan Higher Airborne Command School. In 1986, Sergei Gromov received his first officer shoulder straps and donned a uniform with emblems of the Airborne Forces guided by all winds.

Served with dignity, honestly. He was awarded medals "For distinction in military service" I and II degree. In 1990, I received an offer to continue serving in the security services. He graduated from the Higher Courses of Military Counterintelligence of the KGB of the USSR, after which he served in the relevant units for the maintenance of our troops in the South Caucasus. And in 1993, he returned to his native airborne forces - he became the officer of the military counterintelligence department of the 106 Guards Airborne Division. With this connection, he went to war ...

Officer Gromov, together with paratroopers from Tula, arrived in November 1994 in the area of ​​armed confrontation in the North Caucasus. Winged Guards then thrown into the thick of it. At the edge of the main combat events was the security officer Sergei Gromov. He provided command of important operational information about gangster caches with weapons and ammunition, about upcoming provocations against the Russian military. We had to participate in negotiations with the local population, when old men and women, incited by the militants, were ready to act as human shields. For the successful performance of combat missions, Captain Sergei Gromov was awarded the medal "For Courage". But when the time came to be replaced, the officer asked the management to leave him in a special area for another term. He could not just take it and throw his comrades.

In January-February, the hardest battles unfolded for Grozny. The bandits clung desperately to every house, every street. In one of the clashes in the area of ​​the notorious Minutka Square (formerly named after Khrushchev), the paratroopers' unit met with the powerful resistance of the militants. Snipers did not let our soldiers literally lift their heads.

Sergey understood - he must take responsibility for himself. The officer, who was perfectly prepared first of all in a military and tactical sense, always acted confidently and competently in such a situation. In addition, it was not his first battle. In one of the episodes of his episode in Grozny, when Dudayev's troops launched a counterattack at the command post of their regiment, he personally destroyed five attack aircraft. And now the officer masterfully put out one fire point, another ... Suddenly ...

Then the same sniper for a long time did not allow to approach the body of the captain. Bandits have no feelings, no pity, no compassion. The eyewitnesses of that battle recalled how difficult it was to pull an officer from the rafted area, how they hoped that he would live, that this was just a wound. The wound was fatal. 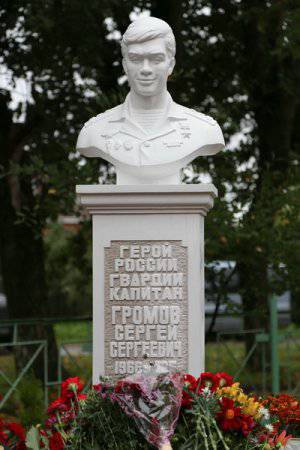 ... Valentina Petrovna Gromova remembers the words that Sergey said to her before closing the door behind her forever: "No one will love you the way I do." For the past 18 years, she lives with the memory of him. Grown up daughter. Galina went in the footsteps of her father - she graduated from the FSB Academy, received officer shoulder straps. Zlata and Nastya are still studying each in their own universities. At the opening ceremony of the monument in front of the Tula School No. XXUMX building, the girls were frankly timid, they were embarrassed by the numerous views in their direction. So, they say, their father was also - he avoided unnecessary attention, but where necessary - he was resolute, aspiring, infinitely brave. So he will remain in the memory of everyone who knew him.

The opening of the monument to the military counterintelligence officer Sergei Gromov was a real event for Tula. The bouquet of scarlet roses was the first to the hero's pedestal that was laid by the governor of the Tula region Vladimir Gruzdev. The former officer himself, a graduate of a military high school, a participant in performing tasks in special areas, a holder of the Medal for Military Merit medal, in his speech stressed that the bust of the Hero is a tribute to all those who died, fulfilling military duty in the name of the Fatherland.

Veterans of the Great Patriotic War, participants in the hostilities of the last decades, pupils of local military-patriotic clubs, active soldiers of the garrison came to the ceremony in honor of the opening of the monument to the military counterintelligence. There were poems, songs on military subjects, veterans talked with young people. Without exaggeration, we can say that this event in a good way united Tula people on this day, was another reason to remember their heroes, all those who glorified their land and their country.

It should be noted that the most active part in creating a monument to the Hero of Russia Captain Sergey Gromov, as well as earlier in the construction of a memorial plaque on the school building bearing his name, was received by veterans and current employees of the Military Counterintelligence Department of the FSB of Russia. “The Chekists do not forget their own,” said Major General Efim Gordeevich Chikulaev, deputy head of the FKR’s veteran council. - We honor all those who fulfilled their duty, remember their loved ones. I must say that veterans of military counterintelligence are under special control of the department’s leadership, ranging from providing targeted, concrete support to regular meetings and live communication. ”

On the example of military counterintelligence officer Sergei Gromov, who has fulfilled his duty to the end, not retreating in the face of mortal danger, generations of defenders of the Motherland will learn. The memory of the courageous officer will now be stored both in the heart and in the stone.

Ctrl Enter
Noticed oshЫbku Highlight text and press. Ctrl + Enter
We are
Installed the crew of the deceased attack aircraft found during the construction work of the bridge across the Kerch StraitVeterans of the Victory Parade: we saw the military power of Russia
32 comments
Information
Dear reader, to leave comments on the publication, you must to register.