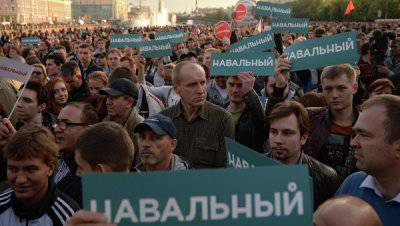 
Our belolentochnaya (or orange, according to the Ukrainian classification) opposition protests by inertia, and does not recognize the results of the vote, but grins at the corners, realizing that it received a serious result as a gift for arrogance and rudeness.

Observers say that Navalny’s success is a consequence of the shortcomings of the Sobyanin headquarters, and the chosen strategy of playing up the radical opposition, bringing it to a vote in order to show its real weight in society, and demonstrate the most fair elections.

Probably, this is the case: they started to play, and they outplayed themselves. We trusted in sociological surveys, not understanding with what, and with whom they are dealing.
The very idea of ​​“bringing to a vote” had a rational grain, but the methods of its implementation were completely unsuitable: you can’t do it with an end in itself, go for it in the wake of a cad: it’s also a discredit of elections, just different! And you will never prove anything to either the boor or his masters, because for them you are obviously not honest, what they have said more than once, and repeated once again after the elections.

A new nonsense in this series: Sobyanin agreed to meet with Navalny - this means that Sobyanin headquarters, and he himself, are still in captivity of their good deeds, and continue to give Navalny gifts. What for? - after all, the elections have already passed ... What can you talk with your robber, who did not succeed this time: so that next time he doesn’t rob much, and it doesn't hurt?

Showing ostensibly their nobility, in fact, Sobyanin's strategists “throw beads in front of pigs”, apparently not knowing this biblical parable, for then “pigs turn” against them. They give Navalny a reason to continue blackmail, which he will definitely take advantage of. Not to mention that they can make him, an obvious demagogue, a political biography. This is a very big service.

Nevertheless, the past elections have shown a large stock of anti-orange strength of society, which, of course, has increased the preparation of the US Syrian aggression. Sometimes the West helps us in such an amazing way. This respite should be used, and figure out: what explains the success of Navalny? What explains the success of the Orange Revolutions, although everyone understands their true goals and driving forces?

There is a good proverb that “the courage of the city takes,” and in politics they sometimes take impudence with the so-called “charismatic personalities”. And even entire countries in times of crisis, war, or other instability — in due time Kerensky took Russia “for the summer and autumn” of the 1917 year, and Yeltsin for the 90-s, Yushchenko - Ukraine for the presidential term. To Navalny, she ensured tactical success in the past elections.

The audacity of the leaders, the creation of mass psychosis is the emotional background of all the "democratic campaigns" of demagogues, and the orange revolutions are the campaigns of demagogues. In general, the original meaning of "democracy" in Antiquity was demagogic, democracy was the power of demagogues (demagogue is the leading people, ancient Greek), but soon they so compromised themselves that their democracy became a dirty word (ohlos, crowd power) for all prominent philosophers, and "demagogue" was filled with a negative meaning.

The fact that today with admiration Aristotle called “ancient democracy” called “polity”, it contained only limited elements of democracy, but you can’t read about it in the manuals “on the development of democracy”.

In the era of the Enlightenment, the encyclopaedists revived “democracy” in the most superficial form, and filled it with a positive sense of the “power of the people” as opposed to the monarchies of Europe, keeping silent about its destructive elemental beginnings. You should be aware of this in order to understand where the energy of the element of “popular protest” comes from. This is serious weapon for the overthrow of not only monarchies, but of any regime, as evidenced today by the Orange Revolutions.

There is a well-known five-step Orange Revolution strategy for the notorious Professor Gene Sharp, but for it you must first prepare the appropriate ground. This is the foundation of the revolution, its orange foundation is created by the network technology, on which commercial network companies like Amway, Oriflame and others work.

Get to know how any network company works - and you will see that the political company Navalny works in the same way. Network technology is simple, and therefore it “works” in the most unfavorable conditions both in the commercial and political markets, under conditions of criticism from the “regime”. Because it is designed for simple instincts and emotions of people, especially young, not burdened with everyday experience.

A network company is a network that works for a certain product with the purpose of selling it to the public and receiving its members for it their dividends. In this case, such a product is Navalny, representing the best American democracy in the world. This is an American technology that works on a very simple ideology: we are the best! USA is the best democracy! Obama is the best president! Navalny is the best politician! (in Russia). From here, the only, in essence, argument is put up to vote for Navalny: he is simply the best! Therefore, he does not need any program! On the one hand, it is a kindergarten, on the other, not only Navalny, but also Obama works according to this scheme!

"You deserve a better life!" (as in the West) - this is the main slogan of Navalny to his flock, noting all political and economic logic, history countries, including recent, and generally common sense. Flatter the ego of man, and turn off his mind. Instead, slip the enemies that prevent him from getting the desired product, which is why everyone is dishonest and mired in corruption. Whoever does not believe in this myth is also an enemy. Experts also call it sectarian logic, which does not tolerate critical objections and doubts that it is right.

Let's say more: Western political life, and therefore the world, is also being built today according to the network principle: “Obama”, “Cameron” and so on - these are also, in fact, network companies selling relevant political products, and they operate according to commercial principles achieving success, and woe to competitors who do not understand this, taking for some "power of the people" ...

Some call it, and not without reason, this is a real American ideology, or a national idea, only covered by “human rights”. Therefore, the United States is so important not to drop the image: Obama, his democracy, etc. Otherwise their worldview will collapse! It is better to bomb Syria, but anyone, and no evidence is important.

These political speculations, unfortunately, are not stupid, but business is stupid, “business is in the cold”, one might say. And it is impossible to prohibit it under “democracy”, for it is its basis. He is successful, and will have it tomorrow, because it plays on the instincts not of the people, but of the crowd. The “market democracy” lies about the “people”: the people can be both great and small, and still can be “sharp iron”, said historian N.M. Karamzin.

Chekhov exclaimed a connoisseur of the human soul: “How people willingly deceive themselves, how they love prophets, broadcasters, what a herd is ... 1000 stupid rely on one intelligent, 1000 stupid rely on one clever word, and this thousand drowns out!” makes people a common faith, tradition, history, and today they are in much worse condition than in the days of Chekhov. And in the place of the people there is a crowd that is so easy to deceive demagogues, especially with the help of the media ...

The victory of S. Sobyanin was ensured, of course, by the overall stable situation in the country, that in Russia, strong, enjoying the confidence of the people, President V. Putin. Otherwise, these elections would have a chance to win Bulk, and then inevitably followed by destabilization of the country according to the 90 type. Therefore, Navalny and his sponsors want so much to remove V.Putin in order to clear the way for bulk.

We need to keep in mind that it is impossible to tame bulk: no matter how much a wolf you feed, it will still look into the forest. This is a whole breed in any society: “And for fun they blow a little hidden fire”. For this, Nero set fire to Rome, and a journalist in the Chekhov's “Lady with a Dog” lamented: boring, what a disgusting, disgusting scandal! This is their element - because it's fun! - and there though the grass does not grow! Then, when it burns, they will laugh in the eyes from somewhere in Paris: do not be so gullible.

If we happened to live in a democracy, then we need to know its true value: “Regarding a shameless person, generosity is excessive nonsense,” said the expert at the time of Ancient Rome Publius Sire.

Ctrl Enter
Noticed oshЫbku Highlight text and press. Ctrl + Enter
We are
Who and how protests today in KharkovGeopolitical mosaic: The Financial Times journalist believes that Medvedev does not have Putin’s “steel taste of threat”, and Texas will demand his gold from the Fed
Military Reviewin Yandex News
Military Reviewin Google News
278 comments
Information
Dear reader, to leave comments on the publication, you must to register.