When will Turkey fall? 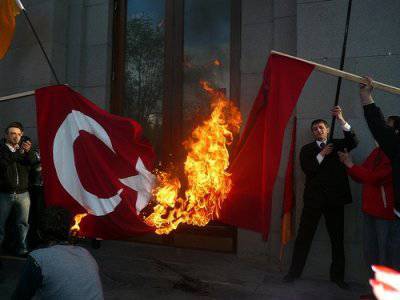 In disputes about the use of chemical weapons in Syria, we must remember the main goal of US policy in the Middle East and in general in the world. Everyone knows it, although it is not discussed in the UN - it is the establishment of American domination, or at least control over the whole world. This is what the “national interests” of the United States are today, and Syria is only a step in this policy. Provocation with chemical weapons is just a way to step over the “Syrian step” by bombing it into the “Stone Age”. A similar provocation with “weapons of mass destruction” served as a pretext for the United States to bomb Iraq, so that the Iraqi scenario is commonplace in Syria.


In implementing their policies, the United States acts extremely pragmatically and cynically, according to the well-known formula: “the end justifies the means”. In this strategy, all means are good, and the lie is simply a military trick in the fight against obstacles on the way, and not the worst, there are worse things, for example, a perfidious attack without declaring war. This is the ultimate Hitler case, and since the United States inherits Hitler in the strategy of world domination, it must also be always remembered.

Most observers believe that the next US target will be Iran, but this is not the case. Vladimir Ilyich Lenin taught that there is nothing better than a good theory. And we have it - this is the theory of “controlled chaos”, which is used by the United States in its practical activities. But if the States follow this tactic, then Turkey will be their next target. And it is easy to show.

The chaos of war is as if natural, it can be given off as “natural”, and seeks to spread along the path of least resistance to places with large stocks of conflicting material. Having arisen in torn Syria, it will certainly roll to Turkey, where there is plenty of such material, especially if you help him a little.

What is Turkey? This is a true ally of the United States, however, this status is not at all a guarantee against betrayal: vassals exist to sacrifice them if necessary. Moor did his job - the moor can leave. And by the way, they understand this in Turkey.

Murat абabas in "Yeni Mesaj" (Turkey) from 02 / 09 / 2013 writes in his article
“Our allies repeatedly left Turkey alone, the allies of Syria, on the contrary, never left the UAR. At a time when Turkey was making major strategic concessions for its main US ally, the Americans, capturing Turkish soldiers in the Iraqi city of Suleymaniyah, put sacks on their heads. Despite the strategic alliance, co-chairmanship in the “Greater Middle East” project, and so on, the United States in front of the whole world covered Turkey with shame. It was obvious that by “strategic ally” the United States meant a whipping boy, just like “democracy” as slaughter and violence. Apparently, it is time for Turkish politicians to give up their blind stubbornness and learn from Assad, so hated by him, who and how to create an alliance. ”

What is Iran? It is a fortress, moreover prepared for defense, well armed and, most importantly, strong in spirit, and the United States does not like to take fortresses. The strategy of "controlled chaos" is designed to solve such problems at the expense of ... chaos. It should be created near the fortress and rolled up to it, as in the old days, siege towers were rolled up to the fortress walls.

Turkey, unlike Iran, is not a fortress at all. It is also well armed, but at the same time aggravated by a longstanding conflict with its Kurdish population, and more recently in Turkey a “democratic revolution” against the Islamist regime of Erdogan almost occurred, that is, it is also a politically split country.

Today, “the Turkish authorities are finishing off the army,” 3 “Kommersant” reports 2013 in September: “Turkey entered a new stage in the struggle between the country's Islamist authorities and the army, which is considered the guarantor of the secular system, yesterday. More than a hundred officers were brought to trial on charges of displacing the first government of Islamists led by N. Erbakan, the predecessor and mentor of incumbent Prime Minister R. Erdogan, in 1997, who had already initiated several demonstration trials of the military. ” In other words, the army in Turkey is experiencing our 1937 year today.

Turkey can become the very "siege tower" of the United States for the assault of Iran. For this, it is necessary to destroy Turkey, taking advantage of its political weakness and the Kurdish problem, and then throw the "Turkish-Kurdish chaos" on Iran. Orientalists know that the Kurds have long been a kind of “match” with which in the Middle East you can always set fire to a big fire, that is, the chaos that the former US national security adviser Zbigniew Brzezinski hinted at the other day: “... the solution to current problems is not limited Syria is, let's say, a potentially explosive state of the Middle East. ” 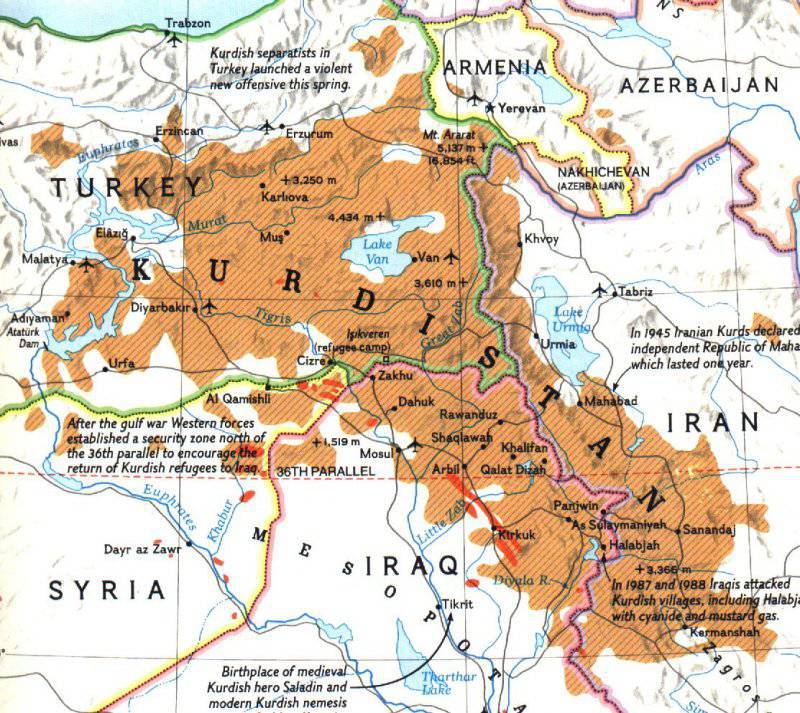 Recall that the Kurds are a big people who have long dreamed of creating their own state, living in Iraq, Turkey, Syria and Iran. Today, in the north of Iraq, they have practically created autonomy, it only remains for them to find a reason for declaring their formal independence from Baghdad. In Iraq, they have highly disciplined fighting units, and in Turkey the Kurdish rebels have become a headache for the government of the country: sluggish guerrilla war has been going on with them for a long time in its eastern regions near the borders with Iraq.

Syrian Kurds are already involved in hostilities, and on the side of Assad against the Islamist militants supported by Turkey. Thus, the Turkish-Kurdish conflict is already beginning to fester, it is his threat that keeps Turkey from active actions in Syria with its Kurdish population. But if Syria is plunged into the chaos of war, then with the help of the Kurds it can be easily transferred to Turkey.

And the United States again "will leave Turkey completely alone", for them it is more important that Turkey is the "key" not only to Iran through the Kurds, to Russia through the Caucasus, but also to Europe, which is becoming increasingly obstinate: NATO refused the US military assistance in Syria! Turkey is the shortest way for the penetration of “controlled chaos” to them ...

Ctrl Enter
Noticed oshЫbku Highlight text and press. Ctrl + Enter
We are
Results of the week. “What do I mean? "I" are different ""Army Games". Masters ABT. Part 2. The trick versus professionalism
Military Reviewin Yandex News
Military Reviewin Google News
213 comments
Information
Dear reader, to leave comments on the publication, you must sign in.