World media and experts commented on the interview with Vladimir Putin 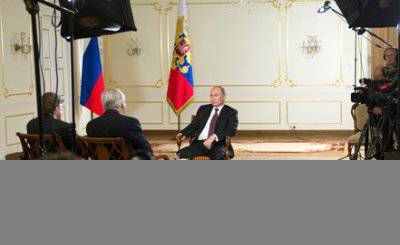 Russian President Vladimir Putin gave an interview to Channel One and the AP agency, in which he did not rule out that the Russian side would agree with the military operation in Syria, but stressed that the sanction to use weapons in the SAR can only give the UN Security Council. World media and political analysts commented on the words of the Russian leader.

The Independent newspaper highlighted Putin’s comments that Moscow “does not exclude” support for an international military operation if full-fledged evidence is presented to the UN Security Council and the world organization gives the green light to such measures. According to the publication, these words "will be considered as a conciliatory step in the run-up to the G-20 summit."

As noted, Putin “added that he considered the idea that the regime / president of Syria Bashar / Assad could have recruited sarin nerve agents or other chemical weapons” as “ridiculous”. “Putin said that it’s still too early to talk about possible actions of the Russian Federation if the United States attacks Syria,” noted the Independent. "However, the general tone of his comments paves the way for one-on-one talks with US President Barack Obama this week," she said.

The Daily Telegraph He called Putin’s words that the Russian Federation does not exclude its agreement with the military operation in the SAR, "a possible dramatic change in the Kremlin’s position on Syria." “Although it is unlikely that Russia will attack its Syrian ally, Putin’s comments will raise hopes among diplomats at the G20 summit, that the Kremlin can be persuaded to abandon the veto in the UN Security Council in voting on a military operation,” she writes.

According to the publication, despite all the pressing economic issues on the summit’s agenda, Putin’s and Obama’s speech on the Syrian issue “will be the most closely followed topic of the meeting.” "If it is destined to be mutual understanding on Syria, it will be developed at one-on-one meetings on the margins of the summit," it predicts, pointing to mediation options, in particular, German Chancellor Angela Merkel.

with the BBC drew attention to the "mostly very tough" position of the Russian leader in any military operation against Syria. “But President Putin left open a small chance of changing the Russian position — something he hadn’t done before,” the corporation said, speaking of words that support for measures “is not excluded” under certain conditions. According to her, "of course, this is a high bar", but opening up some room for maneuver.

Agency Reuterspeaking about Putin’s words that he is counting on negotiations with Obama on the margins of the G20 summit, said: “Putin’s comments seem to be aimed at demonstrating his readiness to preserve the constructive nature of Russian-American relations, despite Obama’s decision to abandon holding a bilateral meeting of leaders. "

Newspaper The Times also paid attention to the readiness of Putin to meet with Obama at the summit. According to her, in the light of the fact that “Washington took a step closer to approving the attacks unilaterally,” Putin was told in an interview with a “carefully coded message”: “he voiced a pragmatic and conciliatory note to Obama,” that Russia can approve a military operation with the support of the UN. "

All media stressed Putin’s warnings to the United States against the unilateral use of force against the SAR.

“President Putin said that he would consider whether Russia could support the UN Security Council resolution, which provides for the use of force against the regime of Bashar al-Assad, if there is convincing evidence of the use of chemical weapons. Arguments for strikes based only on wiretapping are not enough. The Russian leader proposes to wait for the results of the examination carried out at the site of the tragedy by UN inspectors, "said the professor.

However, Kimberly Martin "does not have high hopes for Russia's approval in the UN Security Council of attacking Syria."

Canadian TV: President of the Russian Federation warned the United States that it should not resort to action against Syria

Vladimir Putin "clearly warned" the United States that one should not resort to unilateral military action against Syria. This was emphasized today by leading Canadian TV companies CBC and CTV, commenting on the statements of the Russian leader in an interview with Channel One and the AP.

“According to President Putin,” CBC notes, “striking at Syrian targets will become an act of aggression. He called the West’s assertions that / Syrian President / Bashar Asad used chemical weapons against his people,“ ridiculous. ” If there is any evidence of chemical weapons used by the Syrian government army, they should be presented to the UN Security Council. And this evidence must be convincing, he added. "

“President Putin also said,” the TV company continues, “if such evidence is presented to the UN, then Russia will take decisive steps towards Syria. Some observers express the opinion that he may be leaving the door open for possible support of some sanctions The UN is against Syria. But now the Russian leader is taking a tough stance: he is not convinced that the Syrian regime used chemical weapons, as the West claims, and that Damascus should be punished for it. "

CTV also points out that President Putin "once again insistently demanded: before starting military actions / against Syria / Barack Obama must receive the approval of the UN Security Council." "He noted that even in the US there are experts who believe that the evidence presented by the Obama administration is not convincing, and does not exclude the possibility that the Syrian opposition held a provocative action trying to give the West a reason for military intervention," the broadcaster said.

Bulgarian political scientist: Putin’s arguments are strong, but are unlikely to be heard

Putin presented convincing arguments against the intentions of the US administration to launch a military operation in Syria. About this in an interview with the correspondent. ITAR-TASS was announced by well-known Bulgarian political scientist and sociologist, one of the founders of the Gallup International - Bulgaria company Kancho Stoychev.

The Bulgarian expert called the President’s statement on Syria “acute”, in which he accused US Secretary of State John Kerry of lying. "I am convinced that in this case Kerry’s lies are evident, because the belief that there are no representatives of Al-Qaida in Syria is untrue," said Stoychev.

“Another strong part of Vladimir Putin’s interview is the demand for convincing evidence of the use of chemical weapons by the Syrian authorities. These words should be taken seriously, because, in my opinion, Russia has reliable sources of information in Syria,” the political scientist said. in an interview with the President of Russia, this is a requirement for evidence of the participation of the official Syrian authorities in an attack against civilians using chemical weapons, in which Russia would support the Security Council resolution the United Nations on the use of military force. These are very strong moments in the statement of the Russian president. "

“Unfortunately, in my opinion, these demands / of the President of Russia / will not be heard. It is worth noting that not only Putin, but also other world leaders have a similar opinion. Moreover, according to recent studies, the majority of the US population is against this war,” - added a Bulgarian expert.

Ctrl Enter
Noticed oshЫbku Highlight text and press. Ctrl + Enter
We are
Interview of V. Putin to Channel One and the Associated Press AgencyWhat you didn't want to know about England
76 comments
Information
Dear reader, to leave comments on the publication, you must to register.