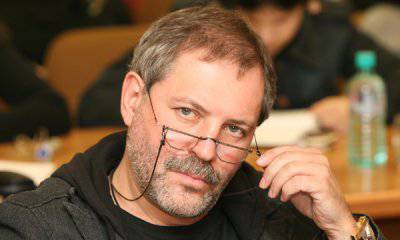 The other day the International Aviation and Space Salon MAKS-2013 ended in Zhukovsky. It is one of the most famous air shows in the world. One of the testimonies of the high status of MAKS is that it is under the patronage of the president of our country.


The famous Russian TV journalist Mikhail Leontyev was a guest of this prestigious aviation forum, designed to demonstrate the achievements of the domestic industry in the field of aviation and space technology, and we asked him to share his views on the event that ended.

About the "MAX" only lazy did not say disgusting

I managed to fly the Yak-130 (combat training aircraft. - Approx. KM.RU). This is absolutely amazing machine in terms of building the entire line of pilot training from initial to combat use. This is a very plastic aircraft!

Only lazy people didn’t say anything disgusting about MAKS, and there were many reasons for them: the president didn’t come, although he had come all the time, and now he sent the prime minister; and the rain began to fall, and there were practically no serious new products. Yes, two prototypes of the T-50 flew, but everyone got used to it and this does not surprise anyone. This is not a finished aircraft, but an advanced prototype. We do it ourselves, this is a promising machine for our Air Force for the next generation. After the United States, we are the only country that is developing the fifth generation in aviation. From this we can conclude that in the near future, no more than two great aviation powers will remain in the world.

We have practically no problems with military aircraft. Yes, there are moments of a technical nature, but they are surmountable. And there is a problem in the “citizen”, but the first prototype of the MS-21 main-line aircraft is already being made. This is the most massive category of aircraft, the replacement of the Tu-154 and analogue A-320.

They say that everything is bad, that there are few foreigners, and the organizers were not ready for the rain. Although how can one prepare for it when the people are thrown from the site by the thousands and no amount of buses can take people out? .. But, nevertheless, the exhibition is very revealing and symptomatic.

At this exhibition, mass-produced aircraft purchased by domestic aviation actively flew and demonstrated. This is not only the Yak-130, but also the Su-30CM, which comes in quantities that are almost marginal for the capabilities of the Russian aircraft industry. We also have exports, which are declining, but, nevertheless, it is very significant. The fact that no one notices, the fact that behind grumbling it remained unchallenged is the most pleasant and the best. If it is, then everything else will be.

With all the problems and contradictions, despite the fact that it is very hard to resuscitate the civil aviation industry, despite the huge obstacles and costs, all this is alive! The main meaning of “MAKS” is a demonstration of the fact that now our aviation is much more alive than on the past “MAKS”, and it is on the order of life more alive than on the first “MAKS”. Then he looked like a breakthrough, an unprecedented aviation holiday. It was a feast during the plague, and now it is everyday life in a more or less improving life. When else could we quietly demonstrate production aircraft purchased by our own army ?!

Ten years ago, five years ago, they could not even dream about it, but now they fly, arrive in units of squadrons, master them. Production is increasing every year. I will give examples. The shown Su-30CM is a heavy fighter of the “four plus” generation, which will be the main one before the fifth generation appears. The Yak-130 is a combat training aircraft, the upgraded IL-76 is almost a new machine.

Ctrl Enter
Noticed oshЫbku Highlight text and press. Ctrl + Enter
We are
Commentary on A. Petrov's interview “Fire and Tactics in the Russian Army: Another Look”
Military Reviewin Yandex News
Military Reviewin Google News
45 comments
Information
Dear reader, to leave comments on the publication, you must sign in.