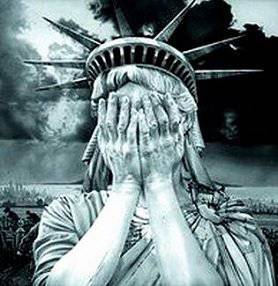 In the rise and fall of empires, regardless of which epoch they belong to, there are similar laws. One such pattern is the one that occurs once, and then the increasing disparity of imperial thinking with the changes taking place in the world. In this case, the lack of flexibility of consciousness does not at all indicate a weakening of the analytical abilities of the imperial elite, but its persistent unwillingness to admit that the design it has built must be radically revised.


Thus, Ancient Rome in its wars with the Goths gradually lost the advantage it once had until the Eternal City was once taken and plundered by barbarian tribes. After that, the collapse of the Roman Empire became unstoppable. The Romans failed to understand that the time of punitive expeditions was over and one had to learn to live in a new way with other nations.

The Roman Empire was crippled by false belief in the invincibility of its military legions. And do not the events of that era resemble something the actions of the Anglo-Saxon empire today? After all, the Anglo-Saxons surprisingly tenacious belief that they can “drive humanity into happiness with an iron hand” seems indestructible.

Over the past 12 years, the United States conceptually lost three wars - the Afghan, the Iraqi and the Libyan. In none of these countries as a result of the action of the “iron hand” the democratic order and the people's happiness did not appear and could not appear. It would seem that this should have prompted a revision of the basic principles for the formulation of US foreign policy. First of all, to the abandonment of the rocket-bomb "democratic missionary".

However, the pattern that had been in effect in ancient Rome still works today. The American elite does not want to see changes in the world.

Hearing in the US Congress about the proposal of Barack Obama to strike at Syria could not be held, since it is clear that Congress is not in a position to prohibit the president from this demonstration of military force. Apparently, more than one cruel lesson will have to be gained by American society in order for its political elite to break free from the complex of imperial superiority. Today, Obama is at the mercy of this complex, declaring that the US is ready to attack Syria without the approval of the UN Security Council. Washington has not demonstrated such contempt for the world organization for a long time ... The attack on Syria, if it takes place, will affect the entire system of modern international relations: this warning, issued on September 3 from Moscow, is not an empty phrase.

At the same time, it should be recognized that the crisis into which external forces plunged Syria cannot be overcome peacefully. Russia's calls to the Geneva-2 conference can really only serve one thing - to demonstrate that the terrorist international gathered in the Syrian Arab Republic is in principle not capable of any dialogue and that force should be used against it.

How far is the US administration from such an understanding? Infinitely far away!

In a blind and indefatigable desire to overthrow the existing political regime in Syria, Washington did not disdain to cooperate with cannibals devouring internal human organs. The more time passes after the events of 21 August, the more obvious that an attack using a chemical weapons in one of the suburbs of Damascus produced a hired rabble recruited in different countries, hated by the Syrian people. In an effort to protect these terrorists from total annihilation, the United States openly acted as an enemy of the people of Syria.

What will the planned strike of American “tomahawks” bring to Syria? The defeat of the gained combat experience of the Syrian army? Capture of Damascus "warriors of jihad"? Establishment of democracy in Syria? Not! Neither the first, nor the second, nor the third will not be! Everything will be different.

There will be a further rallying of the people of Syria around the government. A new wave of hatred for the United States in the Muslim world will rise. Gangs of foreign mercenaries, as crows flew to Syria, one way or another, but will be destroyed. In countries that have not yet been subjected to “coercion to democracy” with the help of bombs and rockets, but which tomorrow may become a victim of aggression, the will to resist will strengthen.

And all this will bring the end of the empire closer.

Ctrl Enter
Noticed oshЫbku Highlight text and press. Ctrl + Enter
We are
General features of the policy of the Roman Empire since the principles of the principality and the modern United StatesOn the other side of the “red” and “white”. Izborsk Club Report
79 comments
Information
Dear reader, to leave comments on the publication, you must to register.