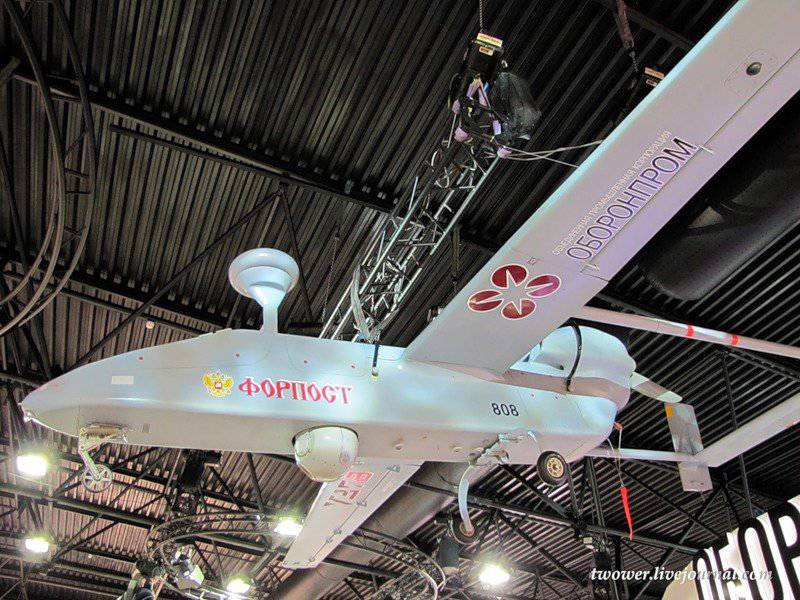 For the first time, demonstrations of military equipment at the test site of the International Armament Exhibition Russia Arms EXPO-2013 in Nizhny Tagil will be broadcast by the Russian outpost. As ITAR-TASS reported today, Denis Koksharov, press secretary of the Nizhny Tagil Metal Testing Institute / NTIMP /, at the landfill of which the exhibition will be held, the aircraft successfully passed test flights and carried out a broadcast of the "battlefield" image. "All the actions that will unfold at the Prospector training ground during demonstrations will be broadcast to the spectators on the main tribune," he said.

As the director general of NTIIM, academician of the Russian Academy of Rocket and Artillery Sciences Valery Rudenko said earlier in an interview with ITAR-TASS, the video signal from the drones will be transmitted to the command post, and from there to the control panels tanks and other military equipment. “During the exhibition, it is also planned to demonstrate the image from air vehicles using a special television system. Everything is done for participants and guests of the exhibition,” he said.

The international exhibition of weapons Russia Arms EXPO-2013 will be held on September 25-28 at the Nizhny Tagil State Demonstration and Exhibition Center for Armament and Military Equipment STIIM. There will be presented the latest achievements of the Russian military-industrial complex and advanced world models of military equipment - the unique characteristics of their products will be demonstrated by 400 exhibitors from 50 countries of the world. Training demonstrations of military equipment are scheduled to begin on September 6.

Ctrl Enter
Noticed oshЫbku Highlight text and press. Ctrl + Enter
We are
Innovation Day of the Southern Military District: Pictures from the ExhibitionThe action “Military service under the contract is your choice!” In Rostov-on-Don: future contract servicemen, exhibitions and “Russian Knights”
Military Reviewin Yandex News
Military Reviewin Google News
23 comments
Information
Dear reader, to leave comments on the publication, you must to register.