Results of MAKS-2013 in the sphere of military-technical cooperation: contracts, agreements and memorandums with seven countries were signed 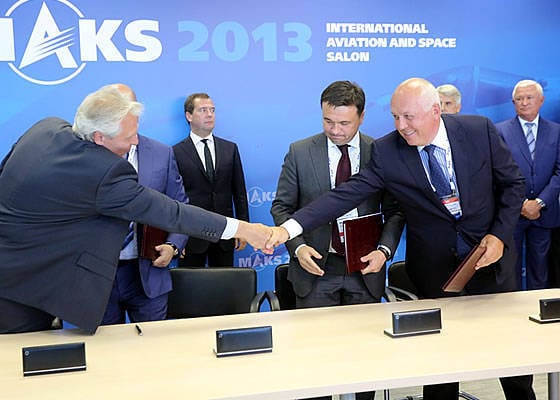 In the course of the MAKS-2013 air show, it was officially announced that it had signed contracts, agreements and memorandums on military-technical cooperation with seven countries: India, Italy, Cameroon, Slovakia, Poland, France and South Africa.


Perhaps contracts, agreements and intentions were signed more, and information about them will appear later. Listed below are only those that are currently officially announced.

In the framework of MAKS-2013, RSK MiG entered into two additional agreements with Basant Aerospace Privet Limited (India) for a total of $ 55 million under the General Offset Contract with the Air Force of the Republic of India, the press service of RSK MiG reported.

Basant Aerospace Privet Limited is a partner of OJSC RAC MiG on offset.

The first contract for the amount of 43 million dollars provides for the creation in India of a service center for the refurbishment of on-board radar stations (BRLS) Zhuk-ME produced by Fazotron-NIIR.

The second contract for the sum of 12 million dollars provides for the creation in India of a service center for the repair of equipment of upgraded MiG-29UPG type aircraft.

According to Sergey Korotkov, General Director of RAC MiG OJSC, “the signing of contract documents was the result of the coordinated work of MiG Corporation and Basant Aerospace Privet Limited, which joined forces in order to achieve a high level of operation and combat readiness of MiG fighters.

The task of the service centers being created will be to maintain the health of the Zhuk-ME radar and the systems of MiG-29UPG and MiG-29К / KUB aircraft by means of reconditioning and consulting services to the engineering staff.

The result of the centers will be:

- reducing the cost of operating the aircraft by reducing the revolving stock of spare parts and transportation costs;

- increasing the level of serviceability of the aircraft fleet due to timely repair of systems, products and units;

- improving the level of flight safety through advanced training of service personnel.

It is planned that the next stage of work will be the creation of a consignment stock of spare parts, which will quickly supply the necessary property to maintain the MiG aircraft fleet in good condition, according to a press release from RAC MiG.

According to the press service of the Russian special exporter, the two agreements signed by Rosoboronexport with Selex Electronics System Ltd within the framework of the Integrated Diagnostic Centers project are aimed at ensuring proper operation of the Be-200 and An-140 aircraft planned for export to third countries 100, equipped with radio-electronic complexes manufactured by Selex Electronics System SpA and Finmeccanica.

The third agreement signed by the parties in the framework of the same project concerns the supply to third countries of the ground Topaz-M flight information processing complex manufactured by NPP TOPAZ.

The start of the international project "Integrated Diagnostic Centers" was given in 2012 year. Today, the main task of its implementation is to create an interaction mechanism that is optimal for all participants.

The fourth agreement on the joint production of the new modification of the amphibian Be-103, intended for special purpose units, was signed between Rosoboronexport, Selex Electronics System SpA a Finmeccanica and OMA SUD SpA

The fifth agreement was signed between Rosoboronexport and OMA SUD SpA. The agreement aims to create conditions for the joint production of new light amphibious aircraft (in the passenger version up to 112) based on the Be-20 aircraft, as well as to perform other patrols including humanitarian tasks.

“The signed agreements are aimed at joint creation and promotion of the newest aviation complexes that meet the requirements of potential customers, including the issue of improving machines throughout their entire life cycle, - said Deputy General Director of Rosoboronexport Alexander Mikheev. “These aircraft will be especially in demand by states with long sea borders and“ problem ”waters."

Rosoboronexport at the MAKS-2013 air show signed a contract with the Ministry of Defense of the Republic of Cameroon for the supply of Mi-17 type helicopters, the press service of the Russian special exporter said.

On the Russian side, the contract was signed by Rosoboronexport general director Anatoly Isaikin, from the Cameroonian side, the country's defense minister Edgar Alain Mebe Ngo'o.

“This is the first contract of military-technical cooperation concluded between Russia and Cameroon. This is a new country for us and we look forward to the successful development of the cooperation that started today, ”said A.Isaykin.

Quantitative and cost parameters of the contract are not reported.

The development of military-technical cooperation with African states is one of the priorities in the marketing policy of Rosoboronexport. In particular, over the past year, ties have been resumed with Botswana, Ghana and Equatorial Guinea.

Beginning with 2000, the export of Russian helicopter technology has been growing at a steady pace. In 2001, the Rosoboronexport line delivered overseas 12 helicopters to foreign customers, and in the plan for 2013 their year was already over 130 units. It is expected that the supply of helicopters in the current year, compared with 2012 year, will grow by more than 20%.

As part of the MAKS-2013 air show, RSK MiG entered into two contracts with the Slovak side under the post-sales support program for the operation of MiG-29 airplanes for the Slovak Air Force.

As the press service of RAC MiG OJSC reports, the contracts provide for the repair and revision of the aircraft’s radar systems, as well as the provision of control and recovery work on aviation equipment manufactured by RAC MiG OJSC.

Sergei Korotkov, General Director of RAC MiG OJSC, noted that the implementation of the signed contracts will significantly improve the performance of the MiG-29 aircraft of the Slovak Air Force. “MiG Corporation is aimed at long-term joint work with Slovak partners,” the head of RAC “MiG” emphasized.

At the MAKS-2013 air show, the Urals Optical and Mechanical Plant (UOMZ), within the framework of long-term cooperation, has signed a contract with its Polish partner - the WZL aviation plant No. 2.

The agreement provides for the modernization and repair of the optical-electronic systems of MiG-29 airplanes in service with the Air Force of the Republic of Poland.

Within the framework of MAKS-2013, the holding company High-Precision Complexes and the French group Safran (Safran) concluded a memorandum of understanding on cooperation in the field of optical-electronic equipment.

According to the press service of the holding, the document was signed by the CEO of High-Precision Complexes, Alexander Denisov, and the chairman, chief executive officer of Safran, Jean-Paul Erteman.

“The memorandum confirms the trust of“ High-precision complexes ”to the thermal imagers manufactured by Sazhem (part of the Safran group) and provides the possibility of placing further orders for their delivery starting this fall,” said A. Denisov after the signing ceremony.

The partnership between “Safran” and the holding “High-Precision Complexes” has been developing for more than ten years in the framework of cooperation of their divisions - “Sazhem” and the Tula Instrument Design Bureau (KBP).

As part of MASK-2013, Rostec State Corporation and the Denel Group of Companies (South Africa) signed a memorandum of understanding. It provides for the development of cooperation in the military-technical sphere, including through the organization of joint development, exchange of experience, information and technology.

According to the press service of Rostec, the document was signed by Deputy Director General of Rostec Dmitry Shugaev and member of the Board of Directors of Denel Gandhi Badel. The agreement was signed in the presence of the Permanent Secretary - Deputy Minister of Defense of the Republic of South Africa Sam Gulebe.

“It is especially pleasant that Rostec has signed this memorandum with one of the partners in the BRICS block, within which the corporation is ready to implement both bilateral and multilateral projects,” said Deputy Director General of Rostec Dmitry Shugaev. “We are already successfully cooperating with one of the divisions of Denel, Denel Aviation, and we are confident that the further development of cooperation will only benefit both parties. The signed document opens up very good prospects for the implementation of specific projects on mutually beneficial conditions in the defense industry. ”

The memorandum provides for the creation of a joint working group that will develop specific projects, coordinate the implementation of these projects and monitor the fulfillment of the obligations undertaken by the parties. The document is designed for one year, its duration may be extended with the mutual consent of the parties.

The start of cooperation between Rostec and Denel was laid in September 2012. Then, at the exhibition in Pretoria, the largest South African manufacturer of military equipment, Denel Aviation, part of Denel, signed an agreement with Russian Helicopters in Rostec to create a regional service center for servicing Russian helicopters in the African region . The center was opened in March 2013 year in Johannesburg.

At the international air show in Le Bourget-2013, Oboronprom and Denel Aviation Company signed a contract to expand the capabilities of the service center for the maintenance, repair and upgrading of Mi-8 / 17 helicopters established in South Africa. The parties agreed to significantly expand the functionality of the service center. It will carry out not only comprehensive maintenance, but also complex repairs and upgrades of civil and military Mi-8 / 17 helicopters.

Ctrl Enter
Noticed oshЫbku Highlight text and press. Ctrl + Enter
We are
The action “Military service under the contract is your choice!” In Rostov-on-Don: future contract servicemen, exhibitions and “Russian Knights”Armored Vehicles Market in the Middle East in 2005-2012 and forecast for 2013-2016
Military Reviewin Yandex News
Military Reviewin Google News
38 comments
Information
Dear reader, to leave comments on the publication, you must to register.