On the German front. Regimental holidays of the 29 Siberian Rifle Regiment in 1914-1917 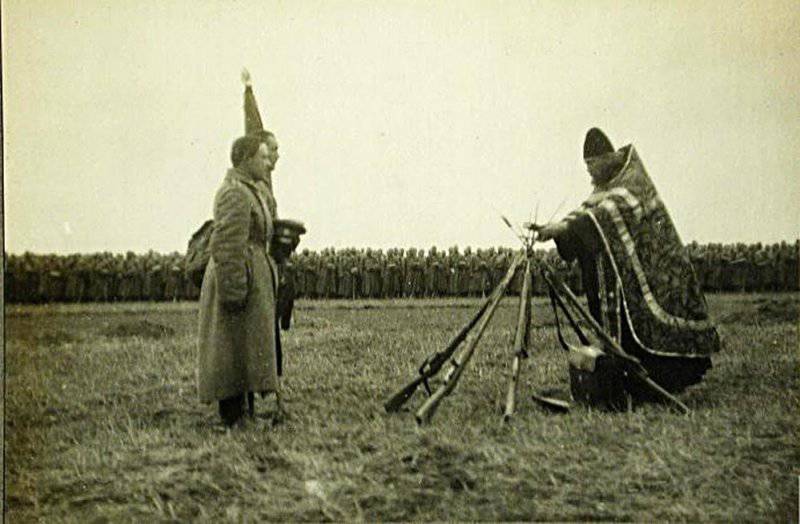 Each of the regiments of the Russian army had its own annually celebrated holiday. It was the day of veneration of an Orthodox saint, who was considered the patron saint of the regiment. The celebration usually included a prayer service, a parade, a celebratory dinner for officers and guests, entertainment, and an improved allowance for the lower ranks. The 29 of August (16 of August in the old style) was marked by the regimental feast of the 29 Siberian Rifle Regiment.


This regiment was one of the oldest regiments of the Russian army in Siberia. The official date of its creation was 31 August 1771, when the Biysk Border Garrison Battalion was created for service on the Kolyvano-Kuznetsk fortified line. In the regiment itself it was believed that история started much earlier. As stated in one of the regimental orders in 1916:

“The beginning of our regiment was set by archers and light horse field teams that guarded the borders of Siberia with China from the time of Tsar Ivan Vasilyevich the Terrible, thus the regiment is the oldest regiment of Russia.”

During World War I, the regiment fought as part of the 8 Siberian Rifle Division of the 3 Siberian Army Corps on the territory of East Prussia, Poland, Belarus and the Baltic States.

In August, the 1914 regiment was in echelons on the way to the front. 11 August (all dates are given in the old style), in Tula, because of the German offensive that began in East Prussia, the regimental echelons were redirected instead of Smolensk to Warsaw. On the evening of August 14, the first two regimental trains arrived in Warsaw, the rest arrived the next day.

In Warsaw, many locals voluntarily joined the ranks of the regiment. Among them are the peasant of the Lublin province, Chislav Hakhaya, a resident of Warsaw, M. Muravinsky, a nobleman of the Warsaw province, Konrad Vikentyevich Myanovsky, the tradesman of Lodz, Jozef Oliversky, and others. 18 August The 1914 regiment marched from Warsaw in marching order and already in September participated in heavy fighting in the Polish city of Augustów, knocking out German troops back to East Prussia.

In 1915, the regiment was again unable to celebrate its holiday. In early August of 1915, the Germans launched an offensive against Minsk, they were advancing between the Viliya and Neman rivers, trying to bypass Vilna from the north and surround Gennke Rodkevich’s 10 army. The German offensive on the positions of the 8 of the Siberian Rifle Division began in the morning of August 13. 1915. The 29 th regiment was in the thick of hostilities, under heavy artillery fire.

The nature of those battles is evidenced by a handwritten note written by 5 on September 1915 by the commander of the 2 battalion and addressed to the regiment commander: “I don’t admit that the situation is bad, in addition to my report, I add that the Germans are accumulating in the hollow of Bystrits between the 7 platoons 2 th mouth. It is necessary to take serious measures, the battalion, that is, rather the remnants without a reserve and with trenches in a hurry, will not withstand the onslaught. From our artillery no help. The Germans fall asleep with shells. The Germans dig in against the 2 Company and, because of its angle, the location of 5, 6, 7 and 8 is shelling the mouth to the rear. Waiting for orders. Lt. Col. Lachinov ".

While holding back the German offensive, the regiment suffered heavy losses. On the day of the regimental holiday, not entirely festive orders were given: “Captains Kolesnikov, Bildin and warrant officer Afanasyev, killed in battle with the Germans, first 13, second and third 15 of this August, to be excluded from the regiment lists.

16 August 1915 the regiment commander Colonel Smirnov was evacuated to the hospital, Lieutenant Colonel Korsak joined the temporary command of the regiment.

In the most difficult conditions, the Siberian regiments and other units of the Russian army that fought on this sector of the front managed to stop the German offensive. They retained Vilna and in the encounter fights, which continued until early September, caused considerable damage to the German troops.

In August, the 1916 regiment was in reserve. On the eve of the regimental holiday, many officers and soldiers received military awards. 11 August after the evening classes at the regimental headquarters were assembled lower ranks, awarded with St. George's crosses and St. George medals for battles near Lake Naroch from 8 to 21 in March. Crosses were distributed by Colonel Lachinov with a choir of music (as the regimental orchestra was then called).

There is a description of the regimental holiday in front-line conditions in the combat log: “The 16 August regiment celebrated its holiday. The 10 clock was lined up near the church. In the 10 hours 30 minutes came the corps commander, Lieutenant-General Red'ko temporarily commander 7-th Siberian division, brigade commander 8-th Siberian Rifle Division Suites EIV Major General Dzhunkovsky, Chief of Staff Corps Major General Bogdanovich and Chief of Staff 8-th Siberian rifle division, Major General Koychev, 30 and 31 commanders of Siberian rifle regiments, 32 representative of the Siberian rifle regiment, 25 commander of the Turkestan rifle regiment, representatives of the Red Cross organizations and other invited persons but. At the end of the liturgy and prayer and congratulations of commanders on the holiday, the guests were offered breakfast. The lower ranks of the regiment on this day were given increased allowances and sweets. At about 5 hours, the protagonists left.

On that day, a telegram was received from the commander of the 4 Army General of Infantry Ragoza, with the following content: “You are. officers and young men of lower ranks congratulate the regimental holiday. God help you in your big and difficult business. I regret that I can not spend this day with you. 1073 Ragoza.

18 August The 1916 regiment once again went to the front, where he replaced the 31 th regiment of his division. There were local battles, the enemy did not show activity, and occasionally a rifle shooting occurred. German artillery fired at regimental batteries, but did not inflict losses. Already at the positions in the regimental order from 20 of August 1916, congratulatory telegrams were received, received on the day of the regimental holiday.

Over the year, much has changed in Russia, the monarchy has fallen, and new problems and anarchy are growing in the country. In August, 1917 was pretty calm at the front, but it was obvious that the Germans were preparing for new battles. The regimental journal of hostilities recorded: “From August 15 to September 1, the Germans continued to work to strengthen their positions in the same area. In the direction of G. dv. Tuganovichi in the direction of the enemy are daily heard the explosions of hand grenades, the crash of machine-gun and rifle shooting. Obviously, the Germans produced enhanced classes. Sometimes drumming is heard. Rare machine-gun and rifle shooting, especially at night. Enemy artillery fired a rare fire at our artillery positions this week. ”

In early August, a telegram from the Chief of Staff of the Supreme Commander was read in all companies and teams: “When restoring order in the units that refused to comply with the order, there are still cases of firing upwards. The chief ordered to confirm his categorical demand:

1. After admonition, persuasion and other measures of moral influence did not give the desired result, present an exacting requirement to the defiant parts, giving it the shortest possible time to complete.

2. Once found necessary to apply weapon, do not allow shooting up; for the use of such shooting chiefs, who allowed her, to prosecute, as for non-execution of military orders. 26 July 1917 G. No. 10082. LUKOMSKY. 0854 Fedorov.

At this time, the corps commander, Lieutenant-General Redko, was dismissed. The regiment received his farewell telegram: “Leaving the service in the ranks of the corps, I express my gratitude to all his ranks for the valiant discharge of sacred duty to the Motherland on the battlefield.

Having survived a series of formidable and difficult combat episodes with parts of the corps, I will always with a special feeling of fullness and pride recall these glorious pages of his historical combat power and life. I am deeply convinced that the time being experienced will bring in new spiritual power and will further strengthen and rally everyone in unity and community of duty to the end and will cover the name of the valiant SIBERIANS and parts attached to them with military glory. Lt. Gen. Redko.

A few days after the resignation of General Redko, the order was received by the Commander-in-Chief of the armies of the Western Front:

“I am going to the South-Western Front to command its armies. In the temporary command of the armies of the front join the commander of 10 army Lieutenant-General Lomnovsky.

A low bow to all the ranks of the Western Front, who, in a difficult time of unrest, collapse, confusion, stood firmly on guard of Russian statehood.

Low bow to all the soldiers who in the last operation amidst treachery and moral decay honestly fought with the enemy.

Like last year, during the regimental holiday of 1917, the regiment was not in position, but in reserve. As recorded in the war regimental regiment, on August 10, a parade of all parts of the regiment took place at the northeastern edge of the Polonech forest, followed by breakfast for invited guests from divisions of the Siberian rifle regiment at the soldiers' club. In the evening, a performance was given in the theater of the 16-th regiment given by the amateur circle of artists of the 59-Siberian corps.

The financial documents state that 1786 rubles were spent for the purchase of pears, apples, seeds, wheat flour and other products for the regimental holiday. 55 cop The cost justification raised doubts among the regimental committee. The minutes of its meeting, held by 17 on August 1917, are written: “The meeting, having familiarized with the statements of representatives from companies and teams, and having heard the explanation of the Chief of the economic department and households. Controls decided:

Explanation of the head of households. To recognize unsatisfactory parts and members of the economic control and initiate an investigation into their actions and, in particular, in the case of drunkenness in the regimental guild (throwing bottles filled with wine, etc.) for which to elect a commission from 3 persons. The commission elected soldiers: Samodelov, Soldiers and Drozdov. Investigation to produce in a week. ”

Regimental documents do not give an answer, what ended the investigation into the drunken violence in the regimental guard during the last regimental holiday of the 29 Siberian Rifle Regiment. After the conclusion of the Peace of Brest, the remaining ranks of the regiment were sent to their homeland by train. With the beginning of the Civil War, Russia split into red and white. Former fellow soldiers were on opposite sides of the front and the names of many of them are well known for the events of the Civil War in Siberia.

Ctrl Enter
Noticed oshЫbku Highlight text and press. Ctrl + Enter
We are
The development of the military-industrial complex of the Russian Empire in the years of WWIC George on the chest. Cavaliers of the Order of St. George on the fronts of the First World War
Military Reviewin Yandex News
Military Reviewin Google News
3 comments
Information
Dear reader, to leave comments on the publication, you must to register.