August 31 2013
405
Russia's interests in relation to Syria are not identical to the interests of Russia in the Syrian conflict. Moscow can quite afford to lose the Assad regime. 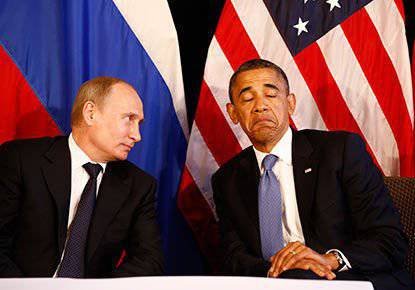 In 2009, the trade turnover between Russia and Syria amounted to 702 million dollars, and this can be considered as a guideline of the "non-military" component of trade between the two countries. In the same 2009 year, according to customs statistics, Russia's foreign trade turnover amounted to 469,0 billion dollars - Syria occupied a little more than a tenth of a percent (0,14%).

Military contracts, widely discussed in the press, on closer examination, look insignificant. Today, Russia and Syria have existing contracts in the military-technical sphere for 3.5 billion dollars. At first glance, this is quite a bit - at the beginning of 2012, the entire order book of Rosoboronexport, which accounts for over 80% of all arms exports from Russia, was $ 33-35 billion dollars - a tenth of which is Syrian. But Damascus does not pay: since 2006, Syria paid Russia only 1 billion dollars from relying on contracts 5,5 billion. This is taking into account the fact that a year before, in 2005, Russia wrote off Syria to 10 billion dollars exactly exchange for guarantees of new orders for weapons. Experts of the authoritative Jane's Report go further and note that Russia incurs direct losses from military trade with Syria in the form of lost profits in solvent Arab arms markets.

Thus, Putin has no economic motives to fight for the Assad regime.

Prior to 2011, Syria was much more focused on the Gulf Cooperation Council, a political superstructure uniting the “gulf monarchies” - Qatar, Saudi Arabia, the UAE, Oman, Bahrain and Kuwait. The explanation for this is quite simple: the share of only two countries, Saudi Arabia and the United Arab Emirates, in the linear foreign trade turnover of Syria is three times more than the share of Russia (15,1% to 4,9%). The monarchies provided an inflow of investments in the infrastructure and tourism of Syria, which was easy, given the amount of resources available to them.

With the onset of the Syrian conflict, of course, the situation has changed, but even an inexperienced observer may notice: Assad is very restrained in responding to Russia's efforts to save his regime: there are no significant expressions of appreciation or mass "friendship demonstrations" typical of Arab countries at the embassy. The Assad regime clearly puts more on the fact that it will be able to negotiate with the monarchies of the Gulf than on the fact that Russia will stop the military operation of the West. All this causes a growing disapproval in Moscow.

The military significance of the logistics point of the ships of the Russian Navy in Tartus is also greatly exaggerated. First of all, this is not a military base, as Tartus is mistakenly called. There is no online connection fleet. There are no airplanes based there, and generally there are no conditions for reception aviation. There are no military personnel - only civilian personnel. There is no hotel for sailors where they could rest - the crews remain on the ships at the port of call.

The “Russian” Tartus is two non-stationary 110-meter floating piers (some sources claim that one: the second is dismantled and decommissioned), several onshore warehouses and a fence.

"The point in Tartus is not of strategic importance. Ships of the Russian operational connection of the Navy in the Mediterranean Sea can replenish stocks in the port of Limassol," said Mikhail Bogdanov, deputy foreign minister of Russia, in an Arab press in late July. He confirmed that at the present time an agreement is in force, under which ships of the Russian Navy received the right to enter the Cyprus port to replenish stocks.

Russia left the same coastal supply points for the fleet, including in the region: the island of Socotra (Yemen), Split (former Yugoslavia), Sfax (Tunisia), Mersa Matruh (Egypt), Tobruk (Libya). African security centers are closed - Dakhlak (Ethiopia) and Conakry (Guinea). But this had no effect on the implementation of the concept of the global presence of the Navy in the world's oceans.

Back in 2001, at the very beginning of the first presidential term, Putin signed the “Maritime Doctrine of the Russian Federation for the period up to 2020”, which took into account the principle of complete autonomy of ship actions in any part of the world’s ocean, and in ten years the Russian fleet learned to do without coastal supply. This is the case in the North and South Atlantic, this is the case in the southern waters of the Pacific Ocean, this is the case in the Indian Ocean - there is no reason for this not to succeed in the Mediterranean Sea, which is much simpler to supply the fleet, especially considering the treaty with Cyprus.

All this allows us to make a reasonable conclusion - the rescue of the Assad regime is not a motive that determines the policies of Vladimir Putin in the Syrian crisis.

Considering the scope of efforts and the readiness of Putin to incur serious losses, this can only be domestic political motives - for any foreign policy motives the price would be too high.

There are no politicians who could afford to ignore their own ratings in the eyes of voters. But some politicians pay attention to this only during election campaigns, considering the period between elections as the time to implement plans without looking at the voters. And some politicians are always sensitive to rating fluctuations. The reasons for one or another pattern of behavior are always purely personal.

Vladimir Putin belongs to the second group. Even today, when the system created by him will withstand almost any fall in the level of trust without a crisis of power, he very carefully follows the fluctuations of trust in him and approval of his activities.

A successful, efficient foreign policy has always been the foundation for the country's approval of Vladimir Putin’s activities. Just two weeks after the election, Levada Center conducted a survey on 20-23 on April 2012 of the year, during which, in particular, it found out with what hopes the Russian population connects Vladimir Putin’s return to the Kremlin. Two thirds of the respondents (67%) hoped for a positive strengthening of Russia's foreign policy positions, and only 15% doubted this. That is, even those who did not vote for Putin hoped for his foreign policy. For example, only 45% of respondents hoped for improvements in the economy.

These numbers meant that the government recovered from a knockdown obtained in foreign policy in March 2011, when, during a vote in the Security Council's 1973 resolution on Libya, then-Russian President Dmitry Medvedev ordered not to use the veto. Medvedev was trivially deceived by the United States when, during a visit to Moscow, Vice President Joe Biden verbally guaranteed that it was a matter of a no-fly zone in the air over Libya, and not of NATO bombing in support of Gadhafi’s opponents.

Gaddafi in 2011 was no closer for Putin than Assad was in 2013, but Putin learned the lesson well. For the first time in ten years, the trust ratings of the authorities (and in Russia this means personally Vladimir Putin) in March 2011 moved down because of the public’s perception of foreign policy as a failure and not in line with Russia's interests. “Gaddafi understood that Russia has no other role and function, except as a postman of the West,” said Alexander Rahr, a German political scientist and long-time Director of the Center for Russia and Eurasia at the German Council on Foreign Policy, in that March.

This was noticed not only by Rahr, but also by Putin’s voter. For the first time in three years, Putin was forced to dissociate himself from the foreign policy of the current President, calling the 1973 resolution "flawed" and compared it with a call for a crusade. This allowed Putin, to some extent, to withdraw from the discontent of the population, but questioned his own decision to refuse re-election in 2008-m in favor of Medvedev.

The Libyan slap turned into a crisis of confidence for Putin inside the country, and Medvedev was worth the nomination for a second presidential term.

Putin can afford to lose Syria. Even the weakening of the weight of the UN Security Council in world affairs can afford it - few people in Russia at least understand this; even fewer those who notice this, given the extensive propaganda machine in the hands of the Russian authorities.

But what a politician Putin cannot afford under any circumstances is to make his foreign policy look like Yeltsin’s or Gorbachev’s: in the eyes of the country: weak, ineffective, not independent. For him, this is a political catastrophe, zeroing in the results of twelve years of political leadership. For returning the status of a citizen of a great world power, the Russian voter forgave Putin a lot, almost everything - so great was the injury inflicted by Gorbachev and Yeltsin. Evaluating all twelve years of Putin’s rule, most of the country's inhabitants (45%) in a poll of VTsIOM of October last year noted the success of his foreign policy. Even peace in the North Caucasus was in the eyes of the population of the lower value of Putin’s rule (34%).

There is no return by Russia of the role of a great power as it is understood by the population of the country - there is no successful politician Vladimir Putin. The economy, the fight against corruption, peace in the Caucasus, overcoming the global crisis - all this is either not in favor of Putin, or only slightly so that he remains in the eyes of the nation as a politician who has revived the country.

This is the main driving belt of Russia's steps in the Syrian crisis.

The author of the article is Alexander Shpunt, director of the Institute for Political Analysis Tools (Moscow), professor at the Higher School of Economics, project manager for election campaigns of V.Putin (2000, 2004) and D.Medvedeva (2008), chief of the Eastern European Bureau of 9 channel.