August 30 2013
155
This review is a summary of the latest News about the situation around Syria.


According to "Russian newspaper" With reference to ITAR-TASS, Carla del Ponte, a member of the UN commission to investigate possible human rights violations in Syria, claims that sarin was used by the Syrian opposition. 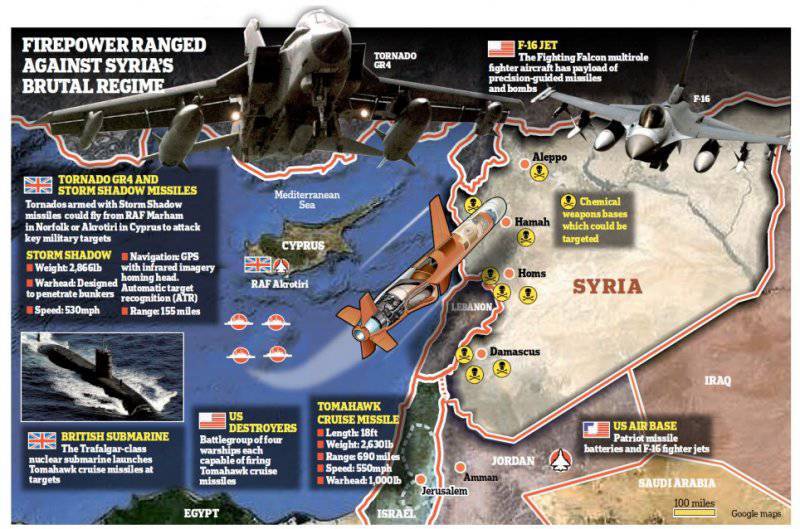 The testimony of witnesses and victims of a chemical attack near Damascus suggests that the nerve gas was used precisely by armed rebels.

"The expert committee has not yet found any evidence of the use of chemical weapons by the government army weapons».

The representative noted that the commission continues to investigate the use of chemical weapons.

In another material "RG" it is reported that the report of chemical weapons experts may be given in the coming days. As ITAR-TASS reports. This was said at the headquarters of the UN Security Council. The inspectors will arrive in New York and will report on the results of the investigation in Syria already 1 or 2 September.

According to Ban Ki-moon, the head of the group of experts on chemical weapons, Mr. Selstrom will arrive in New York on Saturday.

In addition, according to Alexander Gasyuk ("RG"), a UN expert group investigating the use of chemical weapons, has obtained evidence that official Damascus did not use toxic substances. As Syrian Deputy Foreign Minister Faisal Mikdad told reporters, Syrian government forces "never used chemical weapons." “We have evidence of this, we handed them over to the commission of UN inspectors,” the diplomat added.

As noted by Evgeny Shestakov ("Russian newspaper") neither the United States nor the United Kingdom provided the UN with evidence of the involvement of the Syrian authorities in the chemical attack near Damascus. This was stated by the special representative of the UN Secretary-General for Syria Lakhdar Brahimi. According to him, “some substance was used that killed a lot of people. The numbers are called 300 or 600 people, maybe a thousand. "

Nevertheless, London demanded to convene an emergency meeting of the Security Council to discuss a resolution condemning the Assad regime for ... the use of chemical weapons.

It became known that the administration of Barack Obama announced to the US Congress that there was “indisputable” evidence that the use of chemical weapons in Syria was coordinated with official Damascus. About this reports the agency "Reuters" with reference to a member of the committee of the House of Representatives on Foreign Affairs Eliot Angel. As notes "Lenta.ru"A White House spokesman said on a conference call that reports by Syrian senior officials intercepted by US intelligence testify to Damascus’s responsibility. Of course, the names of the officials are not called. Earlier, American media claimed that intelligence intercepted a telephone conversation between Syrian Defense Minister Fahad Jassim al-Freij and the head of the chemical forces on the day of the attack.

Congress was also told that before the attack near Damascus, a movement of government troops was recorded, indicating "preparation of something serious like a chemical attack."

The statement about “something serious like,” we add from ourselves, is, of course, an excellent and comprehensive argument. And the boys and girls from the UN - so, extras, a little bit beyond their third-role roles.

But that's not all. The press also writes about Obama's speech, who gave an interview to the PBS channel and stated - no more, no less - that the Syrian government was behind the recent chemical attack near Damascus.

"Available US data indicates that opposition forces do not possess chemical weapons and the means of their delivery," Obama quotes. "RT". Then the president turned to the method of evidence, which is a favorite of Americans: “analyzing information”: “Analysis of information showed that this was the work of the Syrian authorities. And if so, there must be international consequences. ”

However, he added that "has not yet made a decision."

Next - just guard. These are not double or even triple standards. This is the newest postmodern international law. In the end, Obama is rightly familiar with, tea, he studied at a prestigious institution of higher education.

But the official representative of the White House came out to the public - and stated that the legal circumstances, I mean the legal justification of the military strike on Syria, will be presented after the final decision of Obama.

As transmits RIA News" With reference to Reuters, the United States will independently develop a legal rationale for a military strike on Syria in the event Barack Obama decides to conduct such an operation.

Answering a journalist’s question about the legal viability of a military operation in Syria, White House spokesman Josh Ernest said:

“When the president is finally determined with the appropriate decision, then we will develop and present the legal justification for the legally justifying circumstances.”

This is how it is, comrades and gentlemen? .. It's very simple: the president will decide, and we will legally justify it. The law is that the pole: where he turned, it went there. Like this. Before this statement, even the award in the 2009 year of Obama's Nobel Peace Prize fades.

And so that the inspectors from the UN did not go into the matter, they were told to cover the investigation.

In the article "The Americans asked the UN not to continue the investigation in Syria" ("Le Figaro", France; source of translation - "InoSMI") Georges Malbruneau writes that the American operation against the Syrian regime seems inevitable.

"US officials told the UN that it is better for inspectors not to continue the mission," said an informed diplomatic source. And he continues: “The US did not openly ask them to leave Syria, but they reported that the intelligence services had evidence that the regime’s forces used chemical weapons last week in Damascus and that they no longer need to continue the investigation.”

“As it was already in Iraq in December 1998 of the year, the departure of the mission of the UN inspectors from Damascus will be a sign of the imminent military strikes on the Bashar al-Assad regime. In 1998, the United States bombed the symbols of Saddam Hussein’s power for four days, who was accused of concealing chemical weapons. The operation began only a few hours after the UN mission left Baghdad. On Tuesday, a group of UN inspectors remained at the Damascus hotel, as its security was not adequately ensured. ”

The same diplomatic source notes that “the Russians said they were not going to fight, and thereby agreed to a limited American strike” on the Union regime.

However, Obama pulls back. He does this because Congress demanded an explanation from him.

The terms of armed intervention by the US and its allies in the Syrian conflict may be revised: lawmakers demanded from the president detailed and motivated explanations of the need to participate in the next military campaign, the channel said "RT" with reference to the Wall Street Journal.

John Bochner, the Speaker of the House of Representatives, sent a message to Obama, which requires clear explanations about the military actions against Syria - before they are taken. In this letter, the President of the United States criticized: he did not consult with the legislators on this issue.

By the way, the message was signed by 116 members of the House of Representatives.

Bochner recommends that Obama "inform the Americans and Congress about the objectives, goals and a comprehensive strategy for Syria before its first missile is launched."

As for ordinary Americans, they do not want the US invasion of Syria at all. The original open letter titled “Dear World, Americans Do Not Want War with Syria” (by Eric Blair) published on activistpost.com (translation source - Mixednews.ru).

“... After Gadhafi’s corpse was dragged through the streets of Libya, our Foreign Minister told you with a demonic grin:“ We have come. We saw. He died". I realized: they want to put us all bloodthirsty thugs.

Perhaps you believe that we all agree with the endless wars and illegal drone attacks. Maybe you think we justify indefinite detention or torture of other people. You may think that we support the role of a gendarme and a spy network funded by our taxes. Perhaps you believe that we support the arrogant feigned courage of our government regarding the conquest of the world. You might even hate us for all this.

Despite the fact that they tell you from a bilateral television screen, we are not satisfied with the actions of our government. Our government has completely gone AWOL. They do not represent us. We do not share their enthusiasm for blood. They disgust us ... "

“Like you, we just want a peaceful and productive life with hope for a better future for our children. We want joy, peace, love, and freedom to make our dreams come true. Obviously, our government does not represent these values, since we have no power over it. It rules over us.

Our representatives long ago ceased to represent our interests ... "

"We are told that our president is meeting with his military team to think about the attack on Syria, another independent state that has never harmed or even threatened to harm the Americans - like all other recent victims ..."

“Announcing the war of Obama against Syria, the article on the Associated Press did not receive a single comment in support of military intervention. Not a single one. Instead, all comments add up to a story about cynicism, conspiracy, and corruption. This is a sign that Americans are rapidly awakening ... "

As for an American ally such as Britain, the House of Commons of the British Parliament rejected a resolution on a possible military operation against Syria, reports newsru.co.il with reference to the BBC TV and Radio Corporation.

After the debates on the night of 30 August, a vote was taken, during which 272 MPs voted in support of the document proposed by the government, and 285 deputies voted against it.

After the vote, David Cameron said that the British parliament made it clear that he was opposed to military action in Syria, and promised to "act accordingly."

The decision of Parliament makes it impossible for British troops to participate in the US-led operation against Bashar Assad.

As reported today RIA News" With reference to Reuters, Pentagon chief Chuck Hagel said that, despite Britain’s refusal, the United States will seek to create an international coalition for military intervention in Syria.

But not only Britain abandoned the war with Syria.

As writes today "Russian newspaper", at least twelve NATO countries refused to participate in a military operation against Syria, unless it is sanctioned by the UN Security Council. It is reported by ITAR-TASS, citing an informed source in Brussels.

The agency’s interlocutor said: “The countries that have already refused, with all certainty, any form of participation in the hostilities in Syria without the sanction of the UN Security Council, are in fact much more;

Thus, Barack H. Obama will have to work hard to make an anti-Syrian coalition. In addition, Obama is dissatisfied with his native Congress.

The situation around Syria perfectly shows two turning points in the newest stories and geopolitics: 1) The United States is no longer pulling the hegemon and the world gendarme, only one puff remains of its political determination; 2) the Syrian war revealed a serious split in NATO, which indicates a crisis in the organization. It should be added here that Washington was left at the most inopportune moment without its key ally, Britain.

Observed and commented on Oleg Chuvakin
- especially for topwar.ru
Ctrl Enter
Noticed oshЫbku Highlight text and press. Ctrl + Enter
We are
Situational analysis of the death of the MH17 flight (Malaysian Boeing 777), made on the basis of engineering analysis from 15.08.2014Geopolitical mosaic: Russia made a proposal on the Syrian chemical weapons, which Washington will not be able to refuse, and in Latvia they have missed the German boot
Military Reviewin Yandex News
Military Reviewin Google News
155 comments
Information
Dear reader, to leave comments on the publication, you must to register.