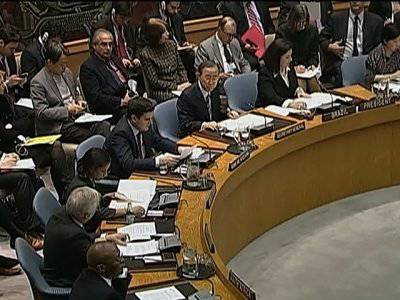 On the eve of the United Kingdom in a closed meeting presented to the UN Security Council a draft resolution that would give the force option the "green" light. But Russia and China called it too harsh and sent it back for refinement - to the obvious irritation of the Americans and the British. Then there were even reports that the Russian and Chinese representatives allegedly left the meeting room in protest. But official sources have denied this information.


There was no demarche on the part of Russia and China at the meeting of the Security Council "five". There was misinformation that the permanent representatives from Moscow and Beijing allegedly left the meeting in protest against the draft British resolution on Syria.

“The Russian representative came out when the meeting ended. It was not a demarche. Just some delegations did not go out for a long time,” the Russian Federation’s permanent representative to the UN said.

According to sources, the draft resolution, essentially resolving a blow to Syria and the introduction of troops, was rejected by Moscow and Beijing, the document was sent back for revision. In Washington, do not hide irritation.

“The Russians hinder every effective step to curb the regime in Syria. They vetoed three draft resolutions, blocked many other decrees condemning the Syrian regime. But in our opinion, the regime will not be able to hide behind Russia's back for a long time. We will make our own decision on the necessary actions ", - promised the US State Department spokeswoman Marie Harf.

What actions it will be, we can assume now. “Difficulties may arise in relations between Russia and the United States if countries decide to act in circumvention of the UN Security Council. Washington, London, Paris see that there is no progress because of Russia's position in the Security Council,” Stephen Peifer, director of the Center for Arms Control Brookings.

To bypass means to violate international law. Western allies nevertheless believe that they can sometimes be neglected. “No legitimization of strikes is needed. This can be done through NATO structures or other organizations. And it will be as legitimate as the operation in Kosovo was without the approval of the Security Council,” said Angela Stant, member of the US National Intelligence Council in 2004-2006.

Suddenly London reduced the degree of rhetoric slightly. Prime Minister Cameron, said that we must wait for the findings of UN inspectors. The change of mood may be due to the fact that the opposition in parliament reminded the prime minister of the invasion of Iraq on a false matter - weapon mass destruction there was not found.

Hesitates and Obama. "I have not yet made a decision. I took note of the opinion of our military and actively consulted with my national security advisers," the head of the White House said.

In an open letter to Obama, Speaker Bonner hurries the lower house. Like, so what's up with Syria? What are the numbers on the countdown board? Days, hours, and maybe minutes, as some hotheads in Washington suggest? Few doubt that the mechanism is running.