Russian Army - the main problem of the military class

February 1 2011
2
The Russian army always achieved the best results when the ruling class was focused on serving its people. This is the period of rule of the first princes of the Rurik dynasty, when their army was able to unite the two main centers of Eastern Slavorus, north Ladoga - Novgorod and southern Kiev. The Russian troops pushed the borders from the Carpathians in the west, to the North Caucasus and the Caspian Sea in the south. Grand Duke Oleg dictates the conditions of the rich Eastern Roman Empire, Svyatoslav destroys the parasitic formation - Khazaria, creates a stronghold of Russia in the Caucasus - Tmutarakan principality, subordinates Bulgaria, which is related to the Russians.


But, as soon as the ruling elite of Russia falls into internecine squabbles, mercenary interests begin to prevail over the all-Russian interests, so the fighting power of the Russian squads falls. Russia is crowded, its lands are captured. 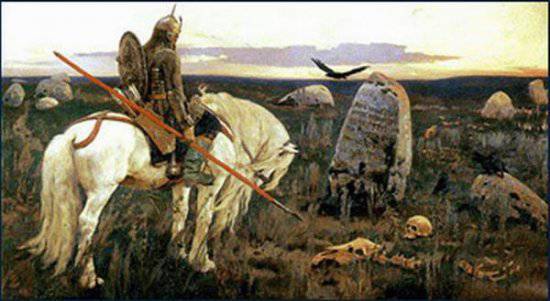 Alexander Nevsky acted in the interests of Russia and Truth was on his side, so he did not know defeat. His descendants - the princes of Moscow, in general, acted in the interests of the whole people, or rather their own interests and national interests coincided. Ivan the Terrible was closest to the people, this fact was reflected in Russian folklore, because he stopped the self-interest and egoism of the boyars, and therefore the Russian army achieved great success with it - huge territories from the Volga to Western Siberia were attached by military means.

The main military reform of Peter the Great

He forced the nobility, which by birth was supposed to bear military service, to begin service from the bottom - a soldier, or a simple sailor. This allowed the imperial army to achieve brilliant victories in the 18 century and the beginning of the 19 century - in the old school (tradition of A. Suvorov and F. Ushakov). Peter, with all his flaws, understood the important thing the commander, the "chieftain," should be reproduced from the very bottom of the army. And he fixed it by personal example, he was a simple scorer.

With this, he restored the ancient military tradition - voivods, princes of the Rus, became the most experienced, the best warriors who passed the "fire and water", who proved their ability to lead.

But after the death of Peter, this most important pivot of the army was broken. Officers began to become by birth, rather than psychological qualities. Although, due to a high genetic predisposition, the Russian people have always been a Warrior People, the Russian army retained high fighting qualities. But now, due to the presence of a significant number of parasitic people who sought to become military because of their high social status, the army began to incur more significant losses, and the level of errors sharply increased. These mistakes by their selfless heroism and self-sacrifice were corrected by real Russian warriors.

As a result, due to the decay of the elite of the Russian Empire, which ceased to be (for the most part) the military aristocracy, which earned the right to rule in battle, Russia was defeated in the Crimean War (1853-1856), could not finish the rotted Ottoman Empire (1877- 1878's.), Lost the war with Japan (1904-1905's.), Lost the First World War and collapsed under the yoke of military difficulties. But, it should be noted that due to the fact that Russia constantly fought - many of the military managers (officers) were able to become real "voivods", correcting the mistakes of the St. Petersburg courtiers on the ground, often with their blood.

In the USSR, the mistakes of the Romanovs period were not eliminated and the Bolsheviks "came on the same rake" of the "new" army. A significant number (and continues to fall) of random, or self-serving people who decided to make a career, to obtain a high social status without bearing responsibility for their mistakes, got into the army.
This explains the catastrophe of the initial period of the Great Patriotic War, when many generals (for example, the commander of the Western Military District - Pavlov) were not “warlords”, but were bureaucrats in military uniform.

Gradually, paying a high price with their blood and lives, the Russian army put forward real “atamans” (such as Rokossovsky), Stalin helped her in this by “raising” the soldiers according to the Spirit, pushing officials to secondary posts.

But, after the death of Stalin, the disease returned and in the Russian Federation passed into a stage when doctors say “n-c is incurable” (although we must remember that the army is a reflection of society and society to make the same diagnosis). It is easier to create a new army, preferably in parallel, than to endlessly reform the current one. When officers finally turned into wordless bureaucrats, who even had personal weapon selected.
Apparently the right attitude towards the officer remained only with special forces, where the officer is not only the commander, but the best unit soldier. 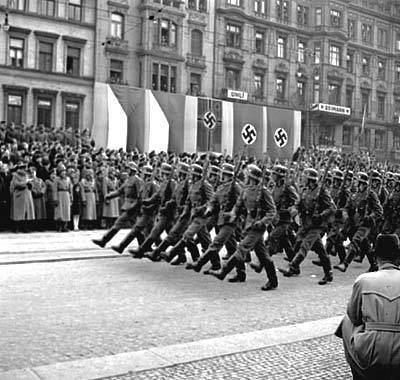 In the understanding of the Germans (from the army of Prussia to the Wehrmacht) army ranks are the most responsible positions in battle. In Germany, there were no special military schools or academies where they taught the theory that was not necessary in battle. First of all, the German was required to have the desire to devote his life to service in the army, and it does not matter by whom (you can be a simple soldier, but an expert in his field whose work the society highly appreciates). The Germans entering professional service did not seek to become high-ranking officers, they sought to become high-level fighters. When a person entered the service, they began to learn and accelerate him purposefully, but special teachers (who were not at war), and co-workers — for example: the platoon commander of anti-tank artillery taught courses based on his platoon, anti-tank guns and their tactics .

Moreover, the main attention was paid to practice, practice, practice and again practice. The best German military specialists grew further, received commanding positions - as in Ancient Russia and the Russian army after the reforms of Peter.

In the German army there was no idiotic practice, when young people were specially, separately taught to be an officer, often people “not smelling gunpowder”. If a soldier has proved for 2-4 of the service year that he will be misunderstood, he will take short-term courses, often in parts and will become a junior commander. And it may take a long way of training, practice and become a field marshal (honorary rank, means "successful commander"), as Keitel - from soldier to field marshal, without academies and colleges.

The Germans chased the soldiers mercilessly, and the candidates for the commanders were trained even harder. The peculiarity of the German military machine was - the education of independent thinking and action (!). The sore spot of our army is schematicism, ruthless suppression of the initiative.

The Germans officers were reproduced in the bowels of the army and reproduced them for war.

In World War II, we won not at the expense of the high level of training of our army, but at the expense of the core of the carriers of the best qualities of the Superethnos of the Rus. Most of them died sacrificing themselves, so that the entire Russian civilization survived, correcting the mistakes of careerists and opportunists.

This caused sincere surprise of the Germans, as the German veteran G. Biederman writes: “Starting our campaign against the Soviet Union, we found ourselves face to face with an unpredictable opponent whose actions, resistance or loyalty could not be foreseen or even evaluated. At times, we encountered fanatical resistance from a handful of soldiers who fought to the last bullet and, even having exhausted all supplies, refused to surrender. It happened that we faced an enemy who surrendered in droves, providing minimal resistance, and without a clearly visible reason. During interrogation of prisoners it turned out that these variables have little in common with education, place of birth or political inclinations. A simple peasant desperately resisted, while a trained military commander surrendered immediately after contact with us. The next fight showed exactly the opposite, although it did not see the system or a clear reason.

Caught in a trap in an old copper mine near Kerch, several officers of the Red Army soldiers continued to resist during the entire occupation of the peninsula. When their water supply was exhausted, they began to lick moisture from the wet walls, trying to escape from dehydration. Despite the cruelty shown by their rivals on the Russian front, the German military confronted them had a deep respect for these surviving fighters who refused to surrender for weeks, months and years of stubborn resistance. ”

Russian civilization won thanks to the best sons and daughters, but they died a lot, the gene pool of the nation was undermined. And in many respects, the fault lies with the system of military training, which allows you to occupy the cozy generals' chairs for licensed, careerists, social parasites.

What can and should be done?

In the conditions of the world crisis, when it smells with blood and gunpowder more and more so that Russia-Russian civilization lived, it is necessary to begin a broad discussion about the future Russian Army. And immediately create it.
Apparently, the first thing that is necessary is a radical change in military education, for 150 years it showed its inferiority. It is necessary to restore the Russian tradition of reproduction of commanders of the best fighters, to use the experience of the Wehrmacht in this.

To restore the unity of command, every commander should think independently, become a co-creator of victory.

To encourage courageous, those who actually fought or are constantly in contact with death - special forces, test pilots, submarine crews, combatants must become the country's elite. They proved by deed that they consist of the best material.

It is necessary to create such a monetary allowance system so that the highest incomes in the country are not among bankers, not directors of commodity enterprises, etc., but among people who are at daily risk of death. They are the best sons of the Fatherland, those who are not afraid to give their lives for the sake of the people, Mother Russia.
To create such a system of upbringing and education that will cultivate the understanding that the Motherland and the People are the highest value, for which it is not a pity to give the most precious thing - your life. 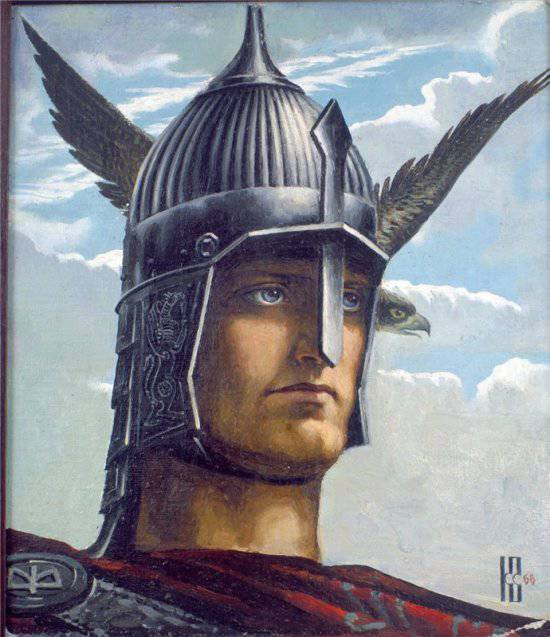