The last trump card of the opposition 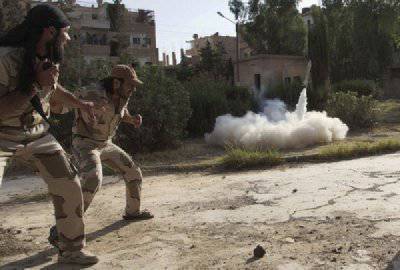 On Wednesday, literally in the morning, news agencies belonging primarily to Western and some Arab countries began to urgently spread messages about the use of chemical weapons by government forces. weapons. According to them, the attack with rockets filled with chemicals was inflicted on the suburbs of the Syrian capital Ain Terme, Jubar and Zamalka and caused the death of hundreds of people. Moreover, different data was cited - from 20 to 1.000 of the dead, including many women and children. And in all cases it was emphasized that this is unconfirmed information from sources in the camp of the armed opposition.


Commenting on these reports, the representative of the Syrian government said that the information on the use of chemical weapons in the suburbs of Damascus has nothing to do with the truth. However, he, as noted by the Syrian state agency SANA, stressed that these messages are specifically aimed at undermining the activities of UN experts who arrived in Syria to study the facts of the use of this type of weapons in the province of Aleppo. As a confirmation of his words, the official drew attention to the fact that Al-Jazeera, Al-Arabiya and Sky News were the first to spread these messages, which actively support opponents of Syrian President Bashar al-Assad.

Naturally, all this will be checked by UN experts. At the same time, it is difficult to assume that the Syrian government, having invited a UN commission in the country to check the facts of the use of chemical weapons by militants, will use it at the time of its work. And why should Damascus need it when his army seized the initiative and pushes the militants in all directions. But the opposition, as well as its foreign patrons, is clearly interested in diverting the commission’s attention from the cases of the use of chemical weapons that have already taken place, and even more so to blame the Syrian authorities for this. After all, their campaign against Bashar al-Assad is bursting at the seams. The failure of the operation in Syria will have a negative impact on the entire “Arab spring”, which, however, is already happening. In the same Egypt, for example, where the Muslim Brotherhood, fighting against secular Syria, is ready to drown the entire country in violence, just to keep in power, which they seized with the help of the West. In short, the opponents of Bashar Assad have the last trump card - chemical weapons, and they do not seem to mind playing it.

Meanwhile, in recent days, another problem of the Syrian conflict has escalated - refugees. Despite the decrease in the intensity of the fighting, their number is steadily increasing. Iraqi Kurdistan suffers especially from this. Last Monday, more than 3 thousands of citizens of the country crossed the border of Iraq, fleeing from the constant clashes of the Syrian Kurds and Islamists, who have become especially frequent recently. In total, over the past five days, about 30 thousands of people crossed the border of Syria in search of refuge.

Yusuf Mahmoud, the special representative of the Secretary-General and the head of the UN Mission in Iraq, acknowledges that they did not expect such an influx of people from Syria and are now doing everything possible to provide shelter for the refugees. “Now 15 trucks with food and clothing are coming from Jordan to us. We also expect 3 to supply thousands of Lebanon tents and water cisterns. We hope to receive all this no later than the end of the week, ”he said.

In turn, the representative of the International Organization for Migration Jamba Omari Jamba said that the regional government of Kurdistan introduced a quota for the passage of refugees, which is 5 thousands of people. That is how many refugees can today cross the border of Iraq every day.

The situation with refugees from Syria who were forced to leave their homes because of the rampant violence, is of deep concern, noted the Russian Foreign Ministry. “Russia pays special attention to the provision of assistance to all the affected Syrian citizens, including refugees in neighboring countries,” said the Itar-Tass news agency, the Russian Foreign Ministry said. - At the same time, we do not share those in distress by nationality or religious affiliation. Our help goes to everyone without exception. ”

To date, the number of Syrians who left the territory of their country is, according to the Russian Foreign Ministry, about 1,7 million. "They are forced to seek refuge in neighboring countries, fleeing the rampant violence perpetrated by extremists and the plight of the economy and unilateral sanctions imposed on the SAR, in particular by the US and the EU," recalled in the Russian Foreign Ministry. And they further noted that in recent days international attention has been focused on the northeastern regions of Syria, populated mainly by Kurds, from which a stream of refugees has flowed towards Iraqi Kurdistan. Thousands of people, including many women and children, abandon their homes to escape the atrocities of the militants of the Dzhebhat al-Nusra and Islamic State of Iraq and the Levant terrorist groups.