"Kalashnikov": Automatic and rifle "soldier of the future" will show on Tuesday 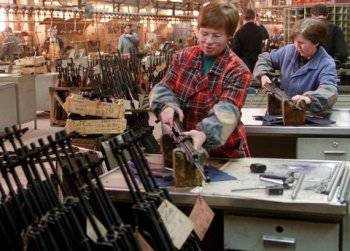 Concern "Kalashnikov" will present promising developments of small weaponsincluding the one designed specifically for equipping the “soldier of the future” on the Innovation Day of the Russian Defense Ministry on Tuesday, the concern’s official representative Elena Filatova said.


“On August 20, at the Innovation Day of the Defense Ministry, the Kalashnikov concern will present experienced, promising and mass-produced weapons that are focused on the needs of the military,” Filatova said.

According to her, Defense Minister Sergei Shoigu will be shown 15 samples of small arms and high-precision weapons, which the Kalashnikov concern is ready to produce for paramilitary units, reports RIA "News».

“Among them are the 4 version of the AK-74 retrofit, AK-12 in various calibers, the modernized AK-103-3 submachine gun and the SVDM sniper rifle developed as part of the Ratnik development work, as well as the special AC-1 assault rifles in the caliber 5,45х39 mm and АС-2 caliber 7,62х39 mm, developed by the order of the FSB for performing special operations, ”added the agency interlocutor.

In addition, according to her data, the concern on the Innovation Day of the Defense Ministry of the Russian Federation will present a BC-121 sniper rifle with a bullpup scheme, high-precision CB-98 and CB-338М1 rifles, developed on the basis of an aluminum box with the ability to install any optical and night sights, and other development.

“The main task of participating in the Innovation Day is to present to the Ministry of Defense the full range of developments that can be put into service with the Russian army. The Kalashnikov concern is extremely important to expand the partnership with the Russian Ministry of Defense in all directions, and we expect that Innovation Day will become a platform for the development of our cooperation, ”said Filatov, general director of the concern Konstantin Busygin.
Earlier, Deputy Prime Minister Dmitry Rogozin announced a delay in adopting the latest combat equipment for the Ratnik Army troops due to the "refinement" of small arms.
The existing field uniform is noticeably different from the “Warrior” form in terms of color, cut and structure of materials.

According to Defense Minister Sergei Shoigu, by the 2015, the Russian army will switch to a new uniform uniform designed for everyday wear. The servicemen will not have to change clothes to use combat kit in “warrior” clothes - they will be the same for everyone.

In September of last year, the Ground Forces of Russia began troop testing of combat equipment of the “Warrior” based on the 27-th separate motorized rifle brigade at the Alabino training ground near Moscow. At the same time, the Commander-in-Chief of the Land Forces of the Russian Federation, Colonel-General Vladimir Chirkin, said that the equipment showed good results during the tests.

Ctrl Enter
Noticed oshЫbku Highlight text and press. Ctrl + Enter
We are
Innovation Day of the Southern Military District: Pictures from the ExhibitionCombat gear "Warrior" on the way
Military Reviewin Yandex News
Military Reviewin Google News
30 comments
Information
Dear reader, to leave comments on the publication, you must sign in.