How the USSR saved the DPRK 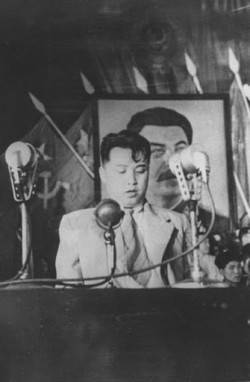 
Today it is quite obvious that the Korean War has practically ended in a “draw”: the United States and South Korea failed to capture the northern part of the peninsula, and Pyongyang - the South. But the question is: how did the DPRK, a small and poor country, manage then to stand against the unified military machine, where the dominant role was played by the American military and economic power? Everything is simple: North Korea owes much of its sovereignty to the diverse, and gratuitous, military, economic and political assistance that it received from the Soviet Union.

Around the beginning of 1960, the DPRK leadership officially recognized the role of the USSR and paid tribute to the military, specialists and other representatives of the Soviet Union who participated in hostilities on its side. But due to the cooling of political relations associated with the notorious anti-Stalinist decisions of the XX and XXII CPSU Congresses and with the policy of ideological secrecy of Pyongyang from Moscow, in the DPRK, the USSR “effectively crossed out” the Korean War. In any case, since the middle of 1960's, not a single DPRK political figure has said a word about gratuitous Soviet aid to North Korea. Accordingly, the North Korean propaganda was then “reconfigured”.

At one time, for political reasons, the main of which was to prevent the “linkage” of the DPRK with Mao Tse-Dunov's China, the Soviet side did not pay attention to the “innovations” mentioned in Pyongyang’s interpretation of that war and the role of the DPRK allies in it.

The official interpretation of the Korean War in Pyongyang, if in brief, is this: North Korea exclusively defeated the aggressors, and only little assistance was rendered to it by China at that time. More precisely - only China ...

But, according to the documents, 1 October 1950, when the American and South Korean troops successfully moved to the north of the peninsula, the head of the DPRK Kim Il Sung (on the photo) sent I.V. A letter to Stalin: “Dear Comrade Stalin! If the enemy will force offensive operations on North Korea, we will not be able to suspend the enemy on our own. Therefore, dear Iosif Vissarionovich, we cannot but ask you for special help. In other words, at the time of the transfer of enemy troops through the 38 parallel, we really need direct military assistance from the Soviet Union. If for any reason this is not possible, then give us help in creating international voluntary units in China and in other countries of people's democracy to provide military assistance to our struggle. ”

In fact, the Soviet Union has provided military assistance to the DPRK since mid-July 1950. The USSR first sent large fighter formations to Northeast China, adjacent to the DPRK. aviation. The first to arrive (by the end of July 1950) was the 151st Fighter Aviation Division. It had a task: from September 1, 1950, simultaneously with the retraining of Chinese pilots to the new Soviet MiG-15 fighters, in cooperation with anti-aircraft air defense artillery, to organize cover for the troops of the 13th Army Group of the People's Liberation Army of China, deployed near the borders with the DPRK. And after agreeing with the USSR and North Korea in early October of the same year on the issue of introducing Chinese people's volunteers into North Korea (introduced in the same month of 1950), the Soviet General Staff decided to form a fighter aviation corps in Northeast China.

By order of the Soviet General Staff No. 5564 of 15 in November 1950, the operational group of the air corps was established.

During the war, Soviet fighters destroyed 1097 enemy aircraft, lost their 319 aircraft and 110 pilots. 212 US aircraft were shot down by North Korean anti-aircraft artillery mainly Soviet-made.
According to Russian researcher Igor Seidov, the ratio of casualties in the Korean War was 1: 3,4 in favor of Soviet military aviation. In other words, for one downed Soviet fighter, 3,4 had to shoot down all types of military aircraft in the American coalition (fighters, attack aircraft, bombers, reconnaissance aircraft, etc.).

We also note that the ships of the Soviet Navy in 1947-1954, including from military bases in Dalniy and Port Arthur, were constantly on duty near territorial waters and in the territorial waters of the DPRK itself, which prevented the landing of aggressors in the North Korean rear. In addition, the USSR in September 1950 - April 1953 sent dozens to the northern regions of the DPRK (mainly through neighboring regions of China) tanks, Armored personnel carriers and self-propelled guns along with crews, as well as a variety of small arms. In addition, groups of Soviet military advisers, the number of which in the DPRK increased after the withdrawal of Soviet troops from there by the autumn of 1949, were constantly on different sectors of the front. Plus, a significant number of various Soviet weapons, including for equipping the North Korean Navy, was transferred to the DPRK back in 1948-1949.


According to the USSR Ministry of Defense for 1954, in total, about 40 thousand Soviet soldiers participated in the Korean War, including in the Chinese and Soviet-North Korean border areas.

A noteworthy fact in this regard: the head of the “Taiwan China” Generalissimo Chiang Kai-shek did not allow the United States to draw Taiwan into that war. The American project of December 1950 for the delivery of the Taiwan Corps to 30 to South Korea thou. Thousands of soldiers and officers rejected Chiang Kai-shek. For, in his opinion, “the decisive factor in the war in Korea is the growing aid to the North from the USSR. Moscow will not allow the defeat of the DPRK, so a military resolution of the situation is impossible. We need to lead the matter towards resolving the conflict. ”

US presidents Truman, then Eisenhower, commanders of the American forces in the Far East, MacArthur and Ridgeway recognized that it was the Soviet military presence in Manchuria (Port Arthur, Dalniy, CER) in the first half of 1950-s that did not allow to crush North Korea. And, in addition, invade mainland China during the American occupation of Taiwan and the 1950-1953.

The top leadership of the DPRK in 1950 more than once thanked the leaders of the USSR and the Ministry of Defense "for their invaluable assistance in organizing the defeat of the American aggressors and their puppets."

In particular, such an assessment of Soviet aid Kim Il Sung expressed N.A. Bulganinu, G.M. Malenkov, V.M. Molotov, N.S. Khrushchev in October 1953 of the year during the official visit to the USSR, we note, the first official visit of the head of the DPRK abroad after the end of the Korean War.

The total losses of the Soviet soldiers in this war, according to the Ministry of Defense, were 299 people. According to other estimates, including South Korean and Taiwanese, around 500 people. Eternal memory to them! Like all those who died in the same "forgotten" in the USSR, and in Russia, wars and armed conflicts.

Ctrl Enter
Noticed oshЫbku Highlight text and press. Ctrl + Enter
We are
Korean partyWar in Korea: before and after
Military Reviewin Yandex News
Military Reviewin Google News
10 comments
Information
Dear reader, to leave comments on the publication, you must to register.