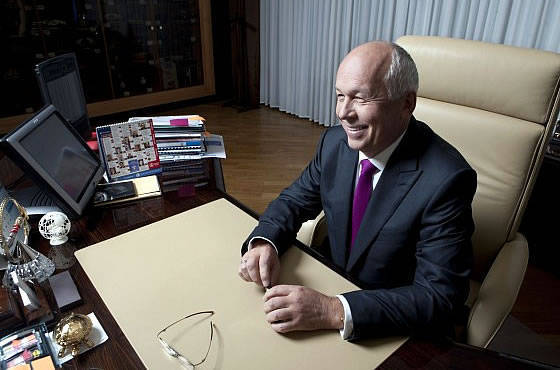 Sergey Chemezov, Director General of Rostec State Corporation, was elected Chairman of the Board of Directors of Rosoboronexport for the third time. This decision was made on the basis of absentee voting, the press service of Rostec reported.


The composition of the new board of directors of Rosoboronexport remained the same.

“The state status guarantees the strict observance by Rosoboronexport of all the norms of international law regulating the export of military and dual-use products, and allows Russian enterprises to effectively and timely fulfill contracts for the supply of arms to foreign countries. At the same time, working in a highly competitive and regulated environment, the company steadily increases its sales, ”said Rostec CEO Sergey Chemezov.

In November of this year, 13 will mark the anniversary of the formation of Rosoboronexport, the only Russian state intermediary in the field of arms and military equipment exports.

During this period, for almost nine and a half years, the company was headed by Sergey Chemezov (from April 2004 of the year to November 2007 of the year) and Anatoly Isaykin (from November of 2007 of the year to the present). During their leadership of the company, Russia managed not only to restore, but also significantly strengthen its position in the global arms market.

After the appointment in the 2004 year of S. Chemezov as the CEO of Rosoboronexport, the next two years (2005 and 2006) became very effective in terms of further strengthening Russia's position on the world arms market.

In addition, the geography of deliveries has expanded, there have been significant changes in the structure of military exports, independent military-technical cooperation subjects have achieved significant results, concrete steps have been taken to improve the situation in the areas of repair, spare parts and after-sales service. Russia has strengthened its work in the sector of modernization of Soviet / Russian-made equipment.

Military-technical cooperation has played a key role in the preservation, development and strengthening of the Russian military-industrial complex in conditions of extremely limited state defense orders. Thanks to funds obtained from military exports, it was possible not only to keep enterprises afloat, not to lose human and technological potential, to improve their financial and economic position, but also to significantly improve the situation in the field of R & D, modernization, and in some cases production. In the most difficult period of the formation of the new Russia, it was military-technical cooperation that played a decisive role in the modernization of the armaments of the Russian army.

If at the first stage, military exports ensured the "survival" of the Russian defense industry, then at the second stage, which Russia entered, military-technical cooperation, along with continued support for defense companies of the Russian Federation, simultaneously solved the tasks of a radical modernization of the military-industrial complex.

For many Russian defense enterprises, military-technical cooperation remains a significant source of funding.

Since November 2007, when Rosoboronexport was headed by Anatoly Isaykin, the company continued an active marketing policy in the global arms market. The results achieved during this period in a number of areas can be considered “breakthrough”.

Speaking at a press conference on the results of work in 2012, A.Isaykin said that in 2012, special exporter supplied HPN to 60 countries for a record amount of 12,9 billion dollars, and Russia's total military exports reached 15,2 billion dollars.

The dynamics of the constant growth of Russian military exports, starting with 2001, suggests that the Russian MTC system today fully meets the needs of not only domestic suppliers, but also foreign customers.

It should be noted that Rosoboronexport is working on the world arms market in the conditions of tough competition. And often the competition from other countries is uncivilized.

Under the conditions of the global economic crisis that was continuing with 2008, the use of unfair competition techniques and methods has become even more active, which is associated with a reduction in the financial capacity of individual states for the procurement of arms and military equipment.

Rosoboronexport constantly faces opposition from Western exporting countries even in the niche traditionally occupied by Russian military products. Moreover, competitors use the levers of political, financial and economic pressure on potential importers of Russian weapons. Especially on the states that are debtors of the International Monetary Fund and the World Bank. Competitors are actively working to discredit Russian weapons in the markets of Asia and Latin America.

Unfair competition is one of the most significant threats to the national security of the state. Russia incurs losses, damage is caused to the business reputation of exporters of Russian weapons, and barriers are being put in the way of expanding the geography of military supplies. In this regard, Rosoboronexport constantly conducts comprehensive work to prevent and curb this practice of uncivilized competition.

Rosoboronexport became an initiator in the fight to protect the intellectual property of Russian developers and create the appropriate legal framework to counter counterfeit weapons production.

As A.Isaykin noted, work in this direction continues to correct the situation. In particular, this work is conducted by a specially created commission.

To exclude the possibility of copying or unlicensed production of Russian weapons, now the item on the protection of intellectual property is mandatory provided for in intergovernmental agreements on the PTS.

In its relations with the main partner countries in the sphere of military-technical cooperation, Rosoboronexport has moved from the traditional seller-buyer relationship to the organization of licensed production of Russian equipment. The development of joint ventures for the development and production of new types of weapons and military equipment is also developing successfully. In the interests of foreign customers in Russia, R & D is conducted on several dozen topics.

As part of the concept of active and offensive marketing, Rosoboronexport improves the terms of payment, forms a flexible and balanced pricing policy, expands the geography and range of supplies of Russian weapons.

In its work, Rosoboronexport uses flexible payment schemes for the supplied military products. Including, by payment by counter deliveries of traditional export goods of this or that country. These can be highly liquid food and non-food products, as well as oil and gas. At the same time, in any of the options for mutual settlements with Rosoboronexport, as well as during the implementation of offset programs, Russian defense enterprises eventually receive “live” money.

As for oil-producing countries, negotiations are underway with Russian oil-producing and gas-producing companies to donate deposits to them for development, and Rosoboronexport offers to pay royalties of these companies by supplying military equipment. Such schemes are discussed.

Another important tool for increasing export opportunities is the sale of licenses. In the future, in export agreements, the share of licensing contracts will grow. At the same time, the approach to the sale of each license is carried out very carefully. Under each license, all conditions are negotiated, including royalties, if the sale of products to third countries is envisaged.

The provision of government loans for the purchase of Russian weapons has become a new form of cooperation between Russia and foreign countries. Such a scheme is implemented with Jordan, Indonesia, Venezuela, Sri Lanka, Bangladesh.

Another promising area of ​​military-technical cooperation expansion is the settlement of the debt problem of a number of Russian countries through counter purchases of Russian weapons.

All activities of Rosoboronexport are carried out in strict accordance with the country's foreign policy. The work is conducted in close contact with the Foreign Ministry of the Russian Federation for the diplomatic support of negotiations on the most important agreements and contracts.

Rosoboronexport has an extensive network of representative offices in 48 foreign countries and more than 30 regions of the Russian Federation.

Rosoboronexport is the official UN supplier. In the future, Rosoboronexport intends to expand cooperation with this organization, including in the area of ​​support for peacekeeping operations, control over the production and non-proliferation of small arms.

The enterprise was established by Decree of the President of the Russian Federation No. 1834 of November 4 of 2000 and carries out foreign trade activities with respect to military products in order to implement the state policy in the field of military-technical cooperation of the Russian Federation with foreign states. The enterprise is the assignee of the federal state unitary enterprises “State company Rosvooruzhenie” and “Promeksport”.

Anatoly Isaykin was appointed Rosoboronexport General Director by Presidential Decree No. 1574 of 26 in November 2007. At the same time, by decree N 1575, Sergey Chemezov, who had previously been the CEO of Rosoboronexport since April 2004, was appointed CEO of the State Corporation for the Promotion, Development and Export of High-Tech Industrial Products Rostekhnologii (Rostec).

Rosoboronexport is the only Russian state intermediary for the export and import of the entire spectrum of final products, services and technologies for defense and dual use, it is included in Rostec State Corporation.

Ctrl Enter
Noticed oshЫbku Highlight text and press. Ctrl + Enter
We are
The action “Military service under the contract is your choice!” In Rostov-on-Don: future contract servicemen, exhibitions and “Russian Knights”Rostec presented the first Russian drone at the Innoprom exhibition
Military Reviewin Yandex News
Military Reviewin Google News
19 comments
Information
Dear reader, to leave comments on the publication, you must to register.