Political analyst Vladimir Zharikhin: "The destruction of the Ukrainian economy may occur" 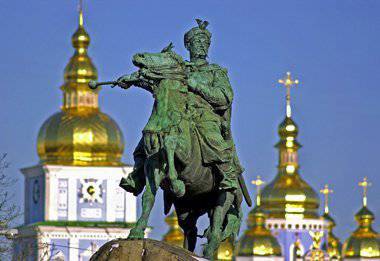 Ukraine stubbornly rushes to Europe, ignoring adverse economic forecasts. Paying for the front of the leaders of a neighboring country will be ordinary citizens, said Deputy Director of the Institute of CIS Countries Vladimir Zharikhin.

- The Ukrainian government has published a draft association agreement between Ukraine and the European Union. It includes the creation of a free trade zone with the EU.

Both Russian and some Ukrainian economists have repeatedly argued that the agreement is unprofitable for Ukraine. However, these arguments were not accepted. Assertiveness of the leading politicians and most of the legislators in lobbying the mentioned agreement is explained by some of them by their commitment to the “civilizational choice” of the country. Say, Ukraine confirms its intention to drift in the direction of "cultural Europe".
But what prevents the Verkhovna Rada itself from adopting “civilized” laws and striving for their implementation without creating some kind of “free trade zone with the European Union”? We are faced with a situation where they hide the true cause of a responsible political step and prefer to hide behind words. And the reason for this is the iron will of the real owners of the Ukrainian political class - local oligarchs, who benefit from such a run on the spot, but supposedly “towards the European Union”.

Note that every sane person understands: no one will accept Ukraine in the EU in the next decade. By the way, the above-mentioned agreement does not provide for its membership in the European Union. And it itself will come into force only when it is ratified by the parliaments of all EU member states. It will take several years. In addition, we cannot exclude situations when some “freedom-loving parliament” will condition its signing of the document with the consent of the Ukrainian leadership to release Yulia Tymoshenko or anyone else from prison.

How does Ukraine intend to build its economic policy in the coming years in anticipation of a “fateful” decision of the EU and refusal to join the Customs Union, in which it is only an observer? Apparently, he hopes to preserve the existing customs privileges in trading a wide range of goods with Russia.

What to do in this situation of the Russian Federation, other countries of the Customs Union? Of course, it is psychologically difficult to perceive oblivion by the closest neighbors of the traditions of our brotherhood. Moreover, the publication of the draft agreement with the EU was regarded by some “patriots of Ukraine” as a defeat for Russia. But for some reason these gentlemen forget that our country can also behave pragmatically.

A month ago, at a representative bilateral conference, the Ukrainian oligarch and Verkhovna Rada deputy Petro Poroshenko said something like this: do not build special illusions, anyway, the draft agreement with the European Union will be signed. There are all the documents necessary for this, and the agreement 80 percent of the deputies of parliament, including those representing the ruling Party of Regions. And soon the Roshen company, which belongs to Poroshenko and supplies confectionery products to Russia, had serious problems related to the claims of Rospotrebnadzor to the quality of sweets and chocolate. And if such scrupulousness will be presented in relation to other Ukrainian goods? Why do we have to turn a blind eye to the careless work of the enterprises of the oligarchs of the neighboring country, especially in a situation of unfriendly behavior on their part?

In the end, Russia is even profitable if Ukraine decides to unilaterally focus on the EU. After all, then entire high-tech sectors of the Ukrainian economy will begin to disappear - mechanical engineering, aviation industry, aerospace industry ... For the reason that there will be no customers. As for the Russian Federation, I believe that it has the right to decide not to use composite products of the country associated with our geopolitical rivals. The Russian Federation can switch to self-sufficiency, use the capabilities of the "assembly shop" both at home and in Belarus. Of course, such pragmatism will adversely affect the standard of living of ordinary Ukrainian citizens; but the "elite" of this country also broadcasts on their behalf. Voters are also responsible for the behavior of the politicians they have elected.

It is possible that the destruction of the Ukrainian economy may even occur, and this country will act in relation to Russia as just a supplier of labor. Well, it will be more profitable for our employers to recruit guest workers from Ukraine than from the countries of Central Asia.
So no one is going to unleash Ukrainian politicians. Do you guys like Europe? Well, go there - that is your choice. But keep in mind: you will be robbed there, as sticky, and you will come to us again - only in what capacity?

Ctrl Enter
Noticed oshЫbku Highlight text and press. Ctrl + Enter
We are
Sergei Glazyev: Creating a free trade zone between the EU and the EU is possibleAbout Stalin and Khrushchev
76 comments
Information
Dear reader, to leave comments on the publication, you must to register.