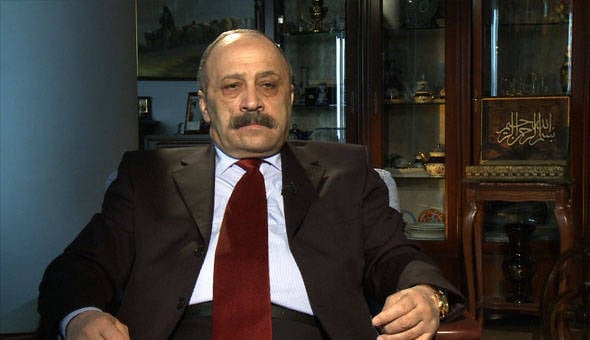 At the presidential elections, the people of Iran supported the candidature of Hassan Rouhani by a majority of votes. More than 50% votes were cast for him.


Adhering to moderate views, Hassan Rouhani managed in the first round to leave behind his conservative rivals and avoid the second round of voting.

An internationally known international politician, Middle East specialist, diplomat, former Iraqi ambassador to Moscow, a member of the Association of Iraqi Translators, Writers and Journalists, who has worked as a direct translator and adviser to Saddam for 20 years, shared his opinion on the policy of Iran Hussein, Dr. Abbas Khalaf.

Dr. Abbas, in your opinion, why did the Iranian people vote for Rouhani?

- The Iranian people went for Rouhani, in the hope that it will normalize relations with neighboring countries, will correct the mistakes of Mahmoud Ahmadinejad’s tough policy. The economic situation of Iran is largely dependent on imports, and exports have decreased by almost half. As a result of the rule of the previous president, Iran was completely isolated. Hassan Rouhani in his official speech outlined, one can say, the main aspirations of the people: economic recovery, constructive cooperation with other countries and, as he put it, “the return of ethics to politics”. According to him, the Iranian people "want a decent life and are tired of poverty and corruption."

But here, as they say, time will show what Rouhani’s actions will be, not in words, but in deeds.

Rouhani, in his inaugural speech, proclaimed a course of detente, negotiation and reduction of tension. The essence of his speech was that the basis for minimizing confrontation is a constructive dialogue, that is, Rouhani, as the new leader of Iran, positions himself as a moderate politician. Dr. Abbas, do you agree with this?

- This is his official statement ... I think he wanted to show his flexibility as a politician, to emphasize that his course will differ from the course of his predecessor, who went to confrontation not only with the West, but even with Arab states. I believe that despite such a confident statement by Rouhani, America and the West will wait for concrete cases and continue to put pressure on Iran to give up its nuclear program and, as they say, “interfere” in the internal affairs of other countries.

In his official speech, the new Iranian president did not say anything about the nuclear program ... In your opinion, this was done intentionally, thereby emphasizing that Iran’s political course is peacefulness, pliability and prudence, or Rouhani will still keep Iran’s nuclear program and all the geopolitical advantages gained since the time of the US invasion of Iraq?

- I think Iran will not abandon its nuclear program, especially since this program has advanced, and Iran is on the verge of obtaining a nuclear weapons. Although Rouhani and bypassed this issue in his official speech, he believes that the nuclear program is a guarantee of preserving the integrity and independence of Iran, especially since he has a bitter example of Iraq that does not have nuclear weapons, which led to American expansion. Considering my diplomatic experience, I believe that if Iran will make concessions on some issues, then this program will never. And another very important, we can say the main point in this matter: the decision on the nuclear program does not belong to Rouhani, but belongs to the supreme leader of the Islamic Republic of Iran, who, by the Iranian system, is the first person in the state, and the president is the second.

Dr. Abbas, do you think that with the coming to power of Rouhani the end of the Islamic revolution in Iran came?

- The fact is that a spiritual Islamic system is already working in Iran, and the president, as I said, is the second person in the state. The word of the people is what the spiritual leader said. Therefore, to talk about the end of the Islamic era in Iran is too hasty conclusions. I want to note that there is still a confrontation in Iran: on the one hand, the United States and the West with economic sanctions, on the other hand, Iran supports Bashar Assad. In addition, the Hezbollah party in southern Lebanon is an integral part of the weapons of the Islamic Revolution of Iran, and the fighters of this party are fighting on the side of Assad. Iran has serious problems with neighboring countries, for example, with Iraq, the countries of the Persian Gulf.

- The fact is that Iran is an apologist for the ideology of Ayatollah Khomeini - the leader of the Islamic revolution 1979 of the year in Iran. For example, the events in Bahrain ... Iran sided with the Shiite rebels, and the predecessor of Rouhani Mahmoud Ahmadinejad, being president, announced that Bahrain is part of Iran. Further, Iran spreads Shiism in Yemen, Iran has problems with the north, because it supports Shiites in Sudan, Iran tries to spread Shiism even in Egypt. For this reason, in due time, diplomatic relations between Tehran and Cairo were interrupted, and only after the coming to power of Mursi, the leader of the Muslim Brotherhood, were these relations resumed. And immediately the confrontation began, because the majority of the population of Egypt is Sunni Muslim.

And at the same time, one of the first statements by the new Iranian President Hassan Rouhani was the frank support of the Syrian regime. At a meeting with Syrian Prime Minister Wael al-Halki, Rouhani stated that "no force can destroy the friendship of the two countries ..."

- I think that the reason for such support of the Bashar Assad regime from Iran is that it considers Syria as a front in the fight against the United States. Iran does not want to fight on its territory. Most recently, Tehran provided Syria with a loan of 3,5 billion dollars, and this despite the difficult situation in Iran itself. Iran understands that if the end of the ruling regime in Damascus comes, sooner or later it will be a turn to become hostage to the United States or terrorists. In addition to financial support, Iran has a very strong military lever in this region - the Hazballa party, which is fighting on the side of the troops of Bashar al-Assad.

Iran’s chairman of the expediency council, Ayatollah Akbar Hashemi Rafsanjani, noted that a new era had begun in Iran’s foreign policy based on mutual respect and trust. Judging by the speech of Rouhani, he is ready to make concessions even from the USA. In your opinion, how will the new Iranian relations with the West?

- The United States and the West put Iran, figuratively speaking, on a “small fire”.

- The fact is that now in Iran there are very serious social problems. The United States and the West are planning to tighten economic sanctions, and then, taking their policies in Iraq as an example, will take control of the country. The West hopes for the continuation of the same course that they used in Iraq, justifying their actions by the 7 chapter of the UN Charter. But now China and Russia have not allowed to adopt this resolution in relation to Iran. Today, Washington does not have, as politicians say, an international umbrella.

How will Rouhani’s election affect bilateral cooperation with Russia? What are the prospects for Russian-Iranian relations? Your opinion…

- Iran has always been and remains for Russia an important partner in this region. In September, Russian President Vladimir Putin is scheduled to visit Iran, and there is hope that cooperation will be established on many issues, including the construction of nuclear power plants. Tehran held consultations with Moscow, and in the near future an agreement on the construction of a nuclear power plant in Iran will be signed. Iran has very few allies and the establishment of normal relations with Russia for the development of bilateral economic relations is the right way to solve many social problems in the country. I think the Iranian leadership is well aware of this.

Dr. Abbas, thanks for the chat.

Ctrl Enter
Noticed oshЫbku Highlight text and press. Ctrl + Enter
We are
Dr. Abbas Khalaf: "The United States will not bomb Iran, they use it as a frightening factor in advancing the missile defense system"Iranian geography
Military Reviewin Yandex News
Military Reviewin Google News
6 comments
Information
Dear reader, to leave comments on the publication, you must to register.