Syria: about humans and nonhumans


Scouring the woodlands in the province of Latakia, the servicemen found a woman with three children. It turned out that she had already been hiding for several days - after the militants broke into the village of Baruda, where an ordinary family once lived peacefully.

The fugitives have not eaten for several days, and they managed to survive a miracle. When the woman was asked if she and her children were afraid of animals, she replied: "Predatory animals are much better than those two-legged animals that broke into our homes."

Indeed, the “oppositionists” who broke into the homes of civilians in the province of Latakia, craved only the blood of the “infidels.” They declared their attack on the north of the province as a “campaign against the Alawites”.

Saudi gangster-mercenary laid out in a network of terrible shots reprisals against civilians, which he boasts, boasting that he killed them personally. In his own words, the villages in which he and his accomplices visited were inundated with corpses. On one of the shots - a dead, half-naked old man. Before the kill, the gangsters apparently outraged him. “Fighters for freedom” put a photo of his son - a young soldier who may have already died in battle (judging by the type of portrait - for example, against the background of the Syrian flag, they often depict fallen soldiers). 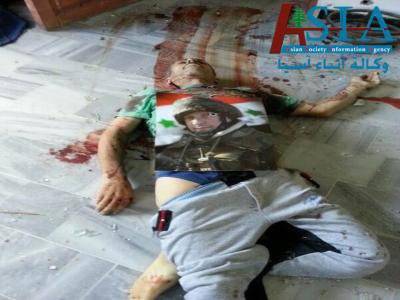 After a raid by militants in the once peaceful and flourishing villages, more than a hundred people were abducted. Many of them were used by gangsters as human shields.

When new details of what these gangsters have created with the population of the north of the province of Lattakia, peaceful settlements where the villains brought war, are revealed, it is impossible not to be amazed by the barbaric, bestial cruelty. Having outraged the 15-year-old, the thugs cut off his legs.

The Syrian army continues to clean up the northern province of Latakia from the raiders. In the village of Aubin, as well as on Mount An-Nabi Al-Shaya, the army managed to conduct successful special operations, as a result of which the territory was freed from murderers and animals in human form.

In the same place, where the bloody paws of the “democratizers” did not reach, life goes on. So, in the city of Latakia passed a grand event - a massive wedding. Immediately 15 young people - military personnel - got married, created new families. Perhaps tomorrow, these suitors will have to leave their young wives to go to battle ... But at least, let the guys be at least one day happy. 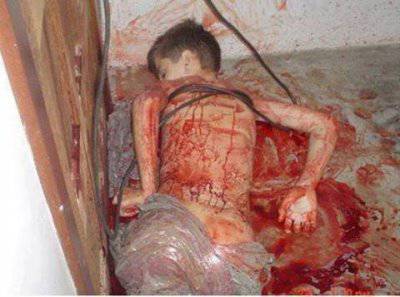 Such a different creative intelligentsia ...

In Damascus, they said farewell to the outstanding Syrian poet Suleiman Al-Isa. He passed away at the age of 92. He devoted his whole life to serving the Motherland and literature.

The poet was born in 1921, near the Syrian city of Antioch, which is currently under Turkish control and is named after Antakya.

From the earliest years, Suleiman joined the ranks of the fighters against colonialism - Turkish and French. For his patriotic poems he was repeatedly thrown into prison. He was very worried that Antioch and the whole province of Iskanderon were forcibly, by forces from outside, separated from Syria.

The poet devoted many poems to children, educating them on the values ​​of love for the Motherland. He translated many masterpieces of world children's literature into Arabic. He was one of the founders of the Writers' Union. He headed the editorial board of the newspaper "Al-Baath" when she began her journey ...

Thousands of people came to say goodbye to the poet-patriot, his funeral turned into a demonstration. Many writers, artists and other representatives of the creative intelligentsia spoke at the funeral ceremony. But the most important thing is that the common people came, ordinary Syrian citizens. Is this not an expression of love and respect for true creators and patriots!

But in Syria there are also such representatives of the “creative intelligentsia” who were full of people in Russia in the 90s, who suddenly began to slander their homeland, trampling their previous achievements. Here and in Syria, there were similar ones, and one of those is Asal Nasri, she is (this is not a curse, this is the last name).

At one time, the Syrian state greatly helped the young singer. She was practically disabled - one leg was shorter than the other. President Hafez Al-Asad then came to her aid, thanks to his efforts, she was sent for treatment abroad. She was cured, her talent was allowed to develop. And Asala herself then devoted many songs to the Motherland, and some of them to Hafez personally, and then to Bashar al-Assad.

But then the “wind of change” blew, and the canary renounced both the Motherland and the people who helped her. Ever since 2006, she became a citizen of Bahrain, and as soon as the conspiracy against Syria began, she immediately sold her talent for money and began to praise the so-called “revolution” to please the West. And it never occurred to her that as a result of this pseudo-revolution, many of those who liked to listen to her were already dead — they fell either in terrorist acts, or the gangsters, whom she now praises, cut their throats in cold blood.

A few days ago, this venerable singer visited Bethlehem. There she was given such a "reception", which she deserved. The Palestinians, for many of whom Syria is an ally and the heart of the Arab world, booed her. Representatives of the Palestinian National Committee in defense of the SAR unfolded the Syrian national flags and began chanting slogans in support of the army and Bashar Al-Assad.

Angered by the fact that she was reminded of her national identity, the Nasri singer turned back to the public. She demanded that the authorities protect her (although no one attacked her).

As a result, representatives of the National Committee for the Defense of Syria were arrested. As eyewitnesses told, in the hall, in addition to outraged Palestinians, there were many disguised police officers - firstly, to protect the "little star", secondly, to fill the hall, since none of the Arabs wanted to listen to the national traitor.

This is how true representatives of intelligentsia differ from false ones - the former are enjoying popular love, the latter - deserved contempt.

In the Syrian province of Hama, near the city of Salamia, in the small village of Al-Hardana, terrorists mined a car. Where they wanted to blow it up and kill someone - remains a mystery. The car brought death to those who prepared it as a deadly weapon - it exploded in the same place where it was filled with explosives. Several gangsters involved in the crime died on the spot.

Similar cases have been repeatedly, and, perhaps, this is the highest justice, when evil returns to the villains themselves.

There are frequent cases of clashes between the bandits themselves. In the city of Rakka, on the territory controlled by the terrorists, a serious conflict occurred between the militants of the so-called “Syrian Free Army” and the organization group called “The Islamic State of Iraq and the Levant” belonging to Al-Qaeda. As a result, al-Qaida’s fundamentalists attacked the headquarters of the so-called “moderate terrorists” from the SSA. Many gangsters on both sides mutually destroyed.

Even in the Western press, there are publications stating that the goals of the “fighters for democracy” are not at all such noble as the European and American philistine try to convince him not to ask questions: who can help taxpayers?

Thus, the American newspaper "New York Times" said that terrorists in Syria, more and more often abduct journalists. This is done, most often, for the sake of ransom — in money or weapons. The author also noted that the Syrian insurgency is becoming more and more religious in nature. The increase in the number of those kidnapped, in his opinion, is closely related to the growing number of religious fanatics among the Syrian "opposition".

Often, the victims of abductions are Western journalists who come to Syria illegally from the Turkish border, without the permission of the Syrian leadership.

These journalists, grossly violating professional ethics, have the goal of providing information assistance to the alleged “fighters for democracy”, but then they are convinced that Syrian pseudo-revolution has nothing in common with such a struggle. They fall into the hands of outspoken savages.

According to the International Committee to Protect Journalists, this year at least 14 employees from both Syrian and foreign media were kidnapped.
For example, the New York Times told about the French journalist Jonathan Alperé, who worked as a press photographer. He was captured by Islamists near Damascus at the end of April 2013. Three months later, he was released after paying the ransom - 450 thousand dollars.

American journalist James Foley, who worked for news GlobalPost website, went missing in Idleb province at the end of 2012. Later it became known that he was in the hands of an Islamic group. Nothing is known about his fate.

And now a video appeared on the Internet testifying to a new abduction. On it - two young, fair-haired women. One of them is Karina Koltso, a native of Moldova, the other is Svetlana Markiyanovich from Belarus. They are surrounded by militants in black masks and with machine guns. One of the girls said that they allegedly worked for Hezbollah under the guise of journalists, conveying information about the location of the "opposition" groups. (I remember the case of the Ukrainian journalistic Ankhar Kochneva, who was threatened by gangsters to say that she was “working for Russian intelligence”).

In addition, the Austrian newspaper “Die Presse” has published an article stating that the “opposition” militants are increasingly in conflict with each other. This is usually due to the division of Western aid, weapons and property stolen from Syrians.

The newspaper noted that the gangsters sell stolen valuables abroad, especially to Turkey, and at the same time there are fights between them because of smuggling routes. Syrian oil, which is being stolen from the territories controlled by the militants, also goes to Turkey. According to the newspaper, Turkish border guards recently confiscated over 400 thousands of liters of petroleum products, which the bandits intended to sell in Turkish territory.
But cases of confiscation are rare - in this case, principled border guards were caught. A lot of things stolen from the Syrian people still go to Turkey. The bandits come to Syria from Turkey, as well as weapons and money for them. The wealth of the Syrian people flows to the neighboring country, and only death comes from there ...

In fact, a huge part of the Syrian "free army" has become a large mafia, long since far from any political slogans. All the care of such “oppositionists” is a banal extraction of material benefits from the sufferings of Syria and its people.

Another part of the “opposition” that has not yet become banal robbers is Al-Qaida’s religious fanatics, who build their activities on the slogans of “fighting against the infidels.” This piece creates chilling atrocities.

Which of these “oppositions” does the West support? Who is closer to him - robbers or murderers?

Ctrl Enter
Noticed oshЫbku Highlight text and press. Ctrl + Enter
We are
Will Syria fall apart? The likelihood of the creation of the “Alawite StateSteel beasts of Syria. T-72
Military Reviewin Yandex News
Military Reviewin Google News
106 comments
Information
Dear reader, to leave comments on the publication, you must to register.