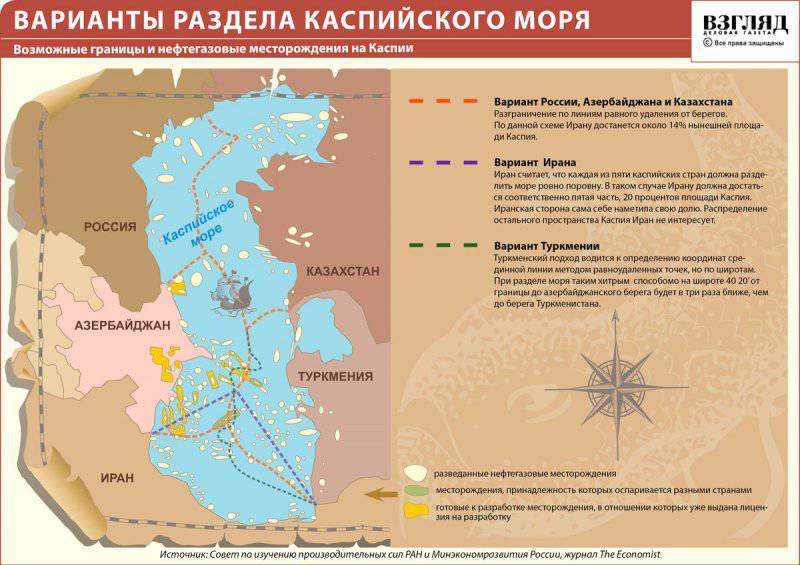 After the collapse of the USSR, the legal status of the Caspian Sea has become and remains one of the main unresolved issues. The solution to this problem is greatly complicated by several factors:


1. The Caspian Sea has no direct connection with the world's oceans; therefore, the principles of the division of territorial waters, as for the “real” sea, cannot be applied to it.

2. The last treaty on the legal status of the Caspian Sea was signed in 1940 between the USSR and Iran. He established a fishing zone in 10-ti nautical miles from the coast of these states, and made it possible for unimpeded movement of merchant ships throughout the Caspian. In this case, nothing about the rules of exploration and extraction of natural resources and minerals in the contract was not. The situation was aggravated by the fact that after the collapse of the USSR, 5 states with access to the Caspian became Russia, Kazakhstan, Azerbaijan, Turkmenistan and Iran.

3. Began active development of Caspian oil and gas resources. the location of oil and gas fields in the Caspian Sea began to influence the bottom demarcation schemes.

Russia, Kazakhstan and Azerbaijan reached a certain compromise in the negotiations - the general sense is to delimit along the line of equal distance from the coast. Iran categorically disagrees with such an option of separation (in this case it gets about 14% of the Caspian area) and Turkmenistan. Iran offers an equal distribution of the area - by 20% of each of the countries, and Turkmenistan is a more complicated way - determining the coordinates of the median line by the method of equidistant points, by latitudes. The trick is that in this case, Turkmenistan will get some controversial oil and gas fields, in addition, the border will be markedly closer to the shores of Azerbaijan.

The diametrically opposed interests and the reluctance to go for compromises led in recent years to active militarization and build-up of the forces of the Navy of the Caspian states. This is especially true in the case of Turkmenistan and Azerbaijan, which have very tough disagreements over the development of three fields - Khazar (Azeri Azeri), Osman (Chirag) and Serdar (Kapaz) ). All these fields are located closer to the shores of Turkmenistan, but Azerbaijan appeals to the fact that Baku oilmen were involved in these fields in the USSR. It also makes sense to elaborate on the Iranian Navy, which could hypothetically clash with the forces of Azerbaijan if the territory of Azerbaijan is used as a springboard for the military campaign against Iran by Israel and the United States.

Now it is worthwhile to dwell in greater detail on the current state and prospects of development of the Navy of the Caspian countries, and also try to calculate the results of possible confrontations. The most likely now is the emergence of an armed clash between Azerbaijan and Turkmenistan because of the above disputed fields. For an objective comparison, you first need to dwell on the composition of the naval forces of Azerbaijan and Turkmenistan.

At present, the Azerbaijani Navy is in a rather deplorable state, although fleet and such ships as the patrol ship of project 159A (the flagship of the Azerbaijani fleet), 5 missile and torpedo boats of projects 205U and 205P enter. The main problem is that anti-ship missiles (RCC) and torpedo tubes were removed from all these ships. As a result, only artillery pieces remained on them, which means that these ships can easily be destroyed by ships that have anti-ship missiles, as they can open high-precision fire from a long distance. Also, the Azerbaijani Navy includes 3 obsolete Soviet patrol boats and 1 obsolete Turkish one. Some assistance was provided by the United States - an obsolete Point boat patrol boat was handed over. According to some reports, another such boat was recently received. In addition, two to three Silver Ship 48-foot patrol boats and smaller equipment were received from the United States. This is where the interaction with the United States, somewhat bloated by the media, ends.

4 minesweepers of projects 1256 and 1258 are more or less meeting modern requirements. In addition, the Azerbaijani marines are more or less well equipped - for it, the Navy has 3 small landing ships of projects 771A, 770 and 106K and 1 landing boat of project 1785. In total, up to 800 marines and up to 20 can be transferred simultaneously with the help of them. tanks. Even after the collapse of the USSR, Azerbaijan was left with ultra-small submarines (group carriers of combat swimmers) of the Triton-1M and Triton-2 types, but these machines are also outdated and also have a very low range.

The Azerbaijani Navy will be radically strengthened by deliveries of the Russian Ukr-E X-35 anti-ship missiles, with a target range of up to 130 km. The cost of the contract according to TSAMTO is $ 75 million, the implementation will begin in 2014 year. RCC will probably be installed on rocket boats and the flagship of the fleet "Qusar" - the patrol ship of the 159A project.

The Turkmen Navy, despite the fact that until recently they were the weakest in the Caspian, now occupy the 2-second place in terms of firepower, after the Russian Federation. Affects the rapid and high-quality gain, begun in recent years. Until recently, Turkmenistan located on the Caspian Sea was actually only a coast guard.

The Navy of Turkmenistan currently includes 5 patrol boats of the Grif type, a boat from the 14081 Saiga project, 4 boats from the Kalkan-M type, supplied by Ukraine, and the basic minesweeper of the 1252 Corundum project. Also, the United States was given a decommissioned boat type "Point". According to some rumors, including from Wikileaks, Turkmenistan wanted to establish serious cooperation with the United States, but so far nothing has been sufficiently large. The main striking force of the Navy of Turkmenistan was the 2011 2 missile boats delivered by the 12418 project set by the Russian Federation in 16. Each of them is armed with the 130 PKR Uran-E "with a firing range of up to 3 km. These ships are superior in power to the Iranian Sina missile boats. Contracts for the supply of more 2014-same ships were signed. Supplies will probably be implemented in the XNUMX year. As we can see, Turkmenistan does not have a large number of ships, but at the same time they are all qualitatively many times higher than the same ships that are in service with the Azerbaijani Navy.

If we imagine a hypothetical conflict between Azerbaijan and Turkmenistan over oil and gas fields, the result so far may turn out to be rather sad for Azerbaijan - its ships not equipped with anti-ship missiles can be destroyed by enemy ships located almost near their coast, from unattainable distances. Some help to Azerbaijan could be provided by its Air Force, however aviation the grouping of Turkmenistan, represented by 24 MiG-29 fighters and 43 modernized Su-25 attack aircraft, even slightly exceeds the Azerbaijani Air Force. So until the moment when Azerbaijan receives its “Uranus”, the balance of forces will be noticeably shifted towards Turkmenistan.

Iran has the second largest power in the Navy after the Russian Federation in the Caspian Sea, which could theoretically be drawn into a conflict with NATO and in the Caspian basin. A rather interesting feature of the Iranian fleet is the absence of large ships in its composition. The fleet consists of more than 90 boats.

The basis of the military power of the Iranian fleet in the Caspian Sea are rocket boats of Houdong Chinese-made, German Kaman and Sina projects. The main armament of all these boats is Chinese anti-ship missiles YJ-82, with a range of damage up to 120 km. The only disadvantage of these missiles compared with the X-35 - less accuracy. On the boat "Sina", Iran began to install its own anti-ship missiles - Noor, with a range of damage also up to 120 km. In addition, Iran is planning to build 1-2 large ships - corvettes equipped with Noor anti-ship missiles, as well as to build light rocket boats with short-range anti-ship missiles (X-75) made in China before 10. The range for the FL 701 is 10-15 km, and the warhead weight is about 20 kg. With such a composition of the Navy, and besides a sufficiently large air force, Iran is incomparably stronger and can sweep the fleet of any Caspian country, except the Russian Federation. So Iran has something to back up its claims on the 30% of the Caspian Sea basin.

Kazakhstan also participates in the arms race in the Caspian, despite its relatively neutral position on the division of the waters of the Caspian Sea, which almost completely coincides with the principles proposed by Russia. This is a rather far-sighted step, otherwise, in the near future, Kazakhstan’s interests could be neglected.

The flagship of the Kazakh flotilla is the only rocket boat "Kazakhstan" project 20971. The basis of the ship’s armament is eight X-35 anti-ship missiles. In the coming years, Kazakhstan will receive three rocket boats of the Yoon Young-ha type, ordered in South Korea. In 2006, three artillery boats of the Sea Dolphin type were received from South Korea. The rest of the fleet is represented mainly by patrol and patrol boats. Of these, 4 was donated to Kazakhstan by the United States in 2006. The navy of Kazakhstan may well stand up for themselves in case of any encroachment on the part of Azerbaijan or Turkmenistan.

The 3 new rocket ships of the 21631 project, which will be equipped with Onyx anti-ship missiles with a range of up to 300 km or Caliber cruise missiles, have already been laid. Also in plans is the decommissioning of outdated artillery boats and the construction of at least 7 artillery ships of the 21630 project.

Also a powerful argument in favor of the Russian Federation are also coastal complexes "Ball", equipped with anti-ship missiles X-35 "Uran" and deployed in Dagestan.

A large number of anti-ship missiles (many of which have an exceptional range), armed with the Caspian flotilla of the Russian Navy, will allow in the event of a conflict to destroy enemy ships from inaccessible distances. In addition, Russia can always pull powerful anti-ship aviation into the conflict zone, which will absolutely have nothing to oppose to other Caspian countries.

From all of the above, we can conclude that the legal status of the Caspian is unlikely to be determined in the foreseeable future. However, the likelihood of local conflicts will decrease from year to year, since the parties will already accumulate a huge amount of powerful anti-shipable means by the year of 2015-2016. In this situation, the price of a possible conflict becomes too great, and the result is unpredictable. You can also trace an important trend - Russia is arming all the Caspian countries, except Iran, with the same U-10 X-35 RCC. This will soon lead to the achievement of a sufficiently strong parity in the Caspian. Only the Russian Navy, which will be dominant, will stand out noticeably, which will help to maintain a stable situation in the Caspian Sea. Also apart is Iran in all of this, which will have to by all means try to get the desired 20% of the Caspian waters, no matter what.

Ctrl Enter
Noticed oshЫbku Highlight text and press. Ctrl + Enter
We are
Iranian geographyCaspian map of the United States and NATO against Russia and Iran
59 comments
Information
Dear reader, to leave comments on the publication, you must to register.