68 years since the bombing of Hiroshima

August 6 2013
571
Today, 68 is over the years when the American “Little Boy” bomb fell on Hiroshima, equivalent to about 18 kilotons of trotyl (according to some estimates, to 20 kilotons). The stated goal of the US atomic attack was to “accelerate Japan’s surrender”. On August 9, the next atomic bomb, Fat Man, fell on the city of Nagasaki. According to various sources, up to 160 thousand people died in the explosion and in the coming weeks after it in Hiroshima, and up to 80 thousand in Nagasaki. Over time, by the 1950 year, the number of deaths exceeded 400 thousands. So far in Japan, more than 200 of thousands of people (“Hibakusha”) suffer from the effects of radioactive contamination - those who were born from irradiated parents. 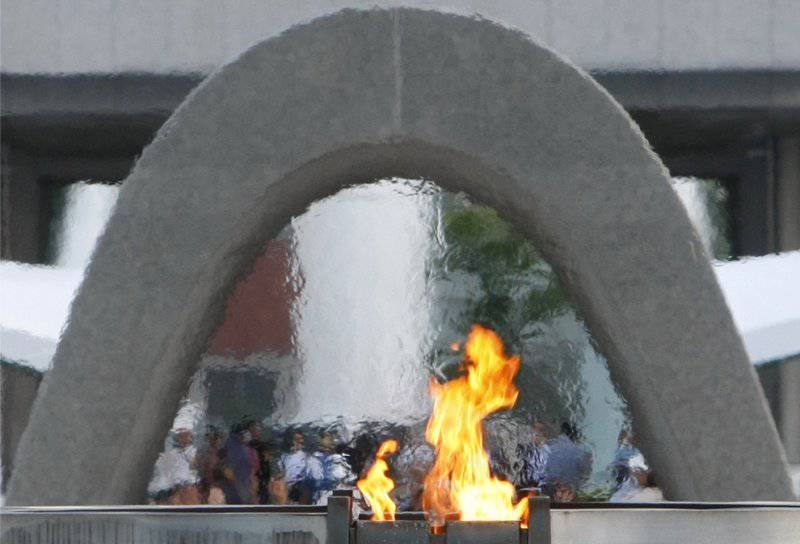 At eight o'clock in the morning local time in Hiroshima began and after forty-five minutes the memorable events ended. In 8 hours 15 minutes, notes correspondent RIA "Novosti" Ekaterina Plyasunkova, - at the very time when a bomb with a uranium charge was dropped on Hiroshima, - the sounds of a memorial bell swept through the World Park, and then a minute of silence fell.

Kazumi Matsui, the mayor of Hiroshima, read the “Declaration of Peace” - a traditional annual (since 1947 of the year) presentation devoted primarily to nuclear disarmament.

The bombing was supposed to start earlier on Truman’s order - from August 3, but the pilots were hampered by poor visibility: dense clouds covered the sky over the intended targets, including Hiroshima, Kokura and Nagasaki. Hiroshima was the primary and primary goal. At that time, 250.000 people lived in the city. The clouds over Kokura and Nagasaki remained on August 6, but the sky over Hiroshima cleared. The pilot of one of the three reconnaissance aircraft sent a B-29 bomber under the command of Colonel Tibbets a signal: "Bomb the first target."

The Japanese did not intercept the American plane. About his terrible stuffing they could not know. Initially, an air-raid was announced, and then, when a small number of American planes arrived, it became clear that the alarm was lifted. On the radio, residents were advised to go to the bomb shelters.

In the morning, 8.15 from a height of 9,4 km bomber dropped an atomic bomb on Hiroshima. All living things — people, birds, animals — close to the epicenter, burned down instantly. Almost all people within a radius of eight hundred meters from the explosion died in the next few minutes. Of these, no more than 1 / 10 survived after the explosion. For those who were not killed by the explosion, who was bypassed by the blast wave and spared the tornado that had begun, a deadly irradiation began ...

At the Flame of Peace Monument in Hiroshima Peace Memorial Park 1 in August 1964, an eternal flame was lit in honor of the victims of atomic bombing. According to the plan of its creators, it will burn until that time “until all the atomic weapon Earth will not disappear forever. ”

Japan is seeking the elimination of nuclear weapons around the world. This was announced today by Japanese Prime Minister Shinzo Abe during a speech at a memorial ceremony in Hiroshima.

"Japan is the only country in the world that survived the nuclear bombardment," quotes him. correspondent ITAR-TASS Yaroslav Makarov. “We have a special responsibility, and therefore we will continue to ensure that there are no more nuclear weapons in this world.”

The head of the Japanese government reaffirmed Tokyo’s commitment to the three nuclear-free principles: not to have, not to produce and not to bring nuclear weapons into its territory.

Hiroshima Mayor Kazumi Matsui said he was grieving for the victims of 6 August 1945 bombing and stressed the need for all countries to “turn to the system of security guarantees based on the principles of dialogue and trust.” At the same time, Matsui expressed concern about the cooperation of Japan and India in the field of peaceful nuclear energy. Even if this agreement "provides for the economic cooperation of states, it is likely that it prevents the complete abandonment of nuclear weapons."

Mayor Kazumi Matsui called the atomic bomb the most inhuman weapon on the planet and absolute evil. In a message to world leaders, the mayor asked them: “How long will you be held captive by mistrust and enmity? Do you really believe that you can maintain national security while saber-rattling? ”

Peace be upon the dead.

Ctrl Enter
Noticed oshЫbku Highlight text and press. Ctrl + Enter
We are
Results of the week. "From eight in the morning to ten - a feat"The victory over Japan was not won by a bomb, but by Stalin ("Foreign Policy", USA)
Military Reviewin Yandex News
Military Reviewin Google News
571 comment
Information
Dear reader, to leave comments on the publication, you must to register.