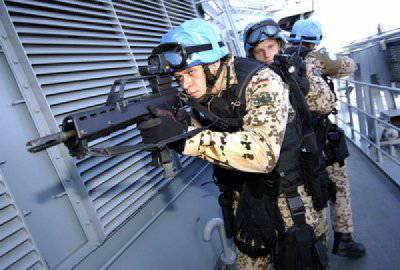 The small town of Eckernförde, located in northern Germany, is one of the most important German ports on the Baltic Sea. Here is the naval base of the German Navy, the place of deployment of the entire underwater fleet Germany. There is also the headquarters of the special forces of the Navy.


The forces of the special forces of the Naval Forces, structurally united in a battalion, are designed to perform special tasks for the landing of the sea, carrying out sabotage and anti-sabotage operations, freeing the hostages and clearing mines, both within the territorial waters of the Federal Republic and away from its shores.

In 2003, a special company was formed as part of the Navy special forces, the personnel of which was intended to conduct inspections, identify prohibited cargoes and, if necessary, release hostages. The fighters of this unit have already managed to establish themselves in such operations as “Enduring Freedom” off the coast of the Horn of Africa and “Active Efforts” in the waters of the Mediterranean Sea. Now the naval special forces are located in the Gulf of Aden, within the framework of the European Union operation “Atalanta”, aimed at countering Somali pirates.

Needless to say, German special forces must meet the highest requirements imposed by the command. It is not enough for the fighters of such a unit to simply be in perfect physical shape; they also need to have developed tactical thinking and command qualities.

All of these components are developed during the semi-annual training of soldiers, which is conducted on the basis of the German Navy in Eckernförde. To proceed directly to the training, candidates must first pass the selection. They will have to pass an examination for physical training, which consists of six disciplines: exercises in the gym, running 5.000 meters and pull-ups. It is because of long-distance running, according to the instructors, that many applicants still fail to proceed to the next stage.

Not less difficult part of the entrance test is shooting. Recruits are tested for accuracy, reaction and sequence of actions. Moreover, the shooting exercises must be performed for a certain amount of time. Errors in changing the store or incorrect sequence of actions when shooting an applicant significantly reduce his chances for passing to the next stage. Shooting is conducted from a Combat pistol, a special version of the P8, made for the special forces of the Bundeswehr land and naval forces. Only those military personnel who succeed in making 60 percent accurate shots will be allowed to train directly.

Applicants who have successfully passed the selection, begin a four-week course of special training, where they will learn the basic principles of boarding the ship from a boat or helicopter, the rules of conduct on the ship, as well as some other issues. For practicing these skills during the month recruits learn to descend the rope with a specially prepared platform with a height of 12 meters. They are also trained to properly build battle formation when disembarking a ship in order to ensure “safety at 360 degrees”.

At the end of this course, soldiers pass an intermediate theoretical exam and pass a physical examination test.

Passed to the next stage is waiting for a new, five-month special training course. Candidates will have to become a real team, in which everyone should understand each other at once. During these five months, they “harden body and spirit,” they are constantly under psychological pressure. At the end of the course in addition to possession of firearms weapons: P8 Combat and MP5 submachine gun fighters must demonstrate their reaction and intelligence. Their task is, hitting targets, to complete the entire route to the shooting range in no more than 95 seconds. Moreover, among the targets there are figures of both “opponents” and soldiers of the Bundeswehr. Hitting a “co-worker” means failing the test.

The training course for fighters of a special unit includes many aspects, including imitation of critical situations. For example, a helicopter crash into water is modeled in a pool. Here, soldiers need to show composure and iron restraint. One of the most difficult components of the preparation is a self-defense course. Approximately 60 percent of applicants who have not sufficiently mastered the skills of hand-to-hand combat, have little chance of passing the "final exam". Along with this, rather specific skills are perfected. For example, the technique of descent on the ropes, including upside down. This may be useful for checking hard-to-reach areas of the ship and ensuring their own safety.

When half a year of hard training at the limit of physical and moral capabilities is over, applicants will have to endure the final, most crucial test. Its theoretical part is a test where you need to answer questions from the field of law. To do this, it is necessary to know the limits of the powers of the division that performs special operations within international organizations.

The practical part of the test is a role-playing game. The servicemen must inspect the motorboat, carry out the necessary measures to search and enter the crew members in the database. Another more difficult task is to inspect the whole ship. Here, the fighters must use all the knowledge and skills gained during the training. They must be ready for armed resistance from the crew, to be able to fight in narrow aisles and cramped cabins.

Only after passing the final test, applicants finally become part of the elite unit of the German Navy. If, for any reason, the exam fails, another chance is given only after repeating the six-month course of study.