"Vector" will indicate the course 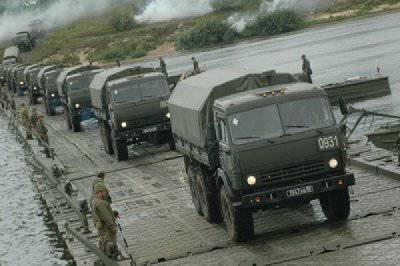 Today, few people are surprised by the press reports that the Russian "defense industry" has supplied another new weapons and military equipment item to the troops. The efforts of the country's leadership in re-equipping parts and compounds with modern samples weapons, equipment and special equipment. Moreover, the army does not receive single samples - entire units are re-armed at the same time. Such a unit is the 1 th vehicle battalion of the logistics brigade of the Southern Military District, which, along with new vehicles, received navigation equipment.


The development of the Moscow Specialized Experimental Design Bureau of the Systems and Measuring Instruments "Vector" is known in many domestic law enforcement agencies. For example, the formations of the internal troops of the Ministry of Internal Affairs of Russia are almost completely equipped with its products. But in the military development of "Vector" since 2010, passed approbation. 29 August 2012, the Minister of Defense of Russia, on the basis of positive results of acceptance tests, signed an order for the Russian Armed Forces to supply an automated monitoring system for the location of mobile objects using satellite navigation systems GLOHACC / GPS manufactured by SOKB Vektor. This system is designed for operational control in peacetime (with display on electronic digital maps) the location and speed of controlled vehicles (CCC), the accumulation, storage and processing of these data with a view to providing them for analyzing the results of using the CCC. At the same time, the system and its component parts were assigned names and codes were established according to the Classification of weapons, military, special equipment and military-technical property of the Ministry of Defense of Russia.

Representatives of the higher command personnel of the military districts were able to familiarize themselves with it in September last year as part of a large-scale exercise of logistic support units of the Southern Military District at the Prudboy training ground. Generals and officers got acquainted with the technical innovations, which in the near future should be enacted in large quantities. One of them is the system for monitoring the location of mobile objects using satellite navigation system GLONASS. The capabilities of the system were checked in the case - in the course of fulfilling the tasks of logistics. At the landfill, a traffic control unit of the road and commandant battalion of the MTO brigade was deployed, the personnel of which, using the system, carried out real-time monitoring and control of the car convoys during the task of delivering ammunition, fuel and food to the training fighting site. If necessary, this equipment can be mounted on armored vehicles. These systems significantly increase the security of military transport, which is especially important in the conditions of combat and special operations, and increase the efficiency of transport control. 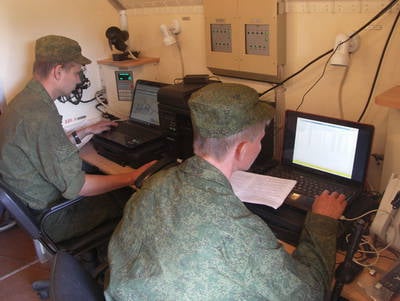 Such “beacons” were very lacking during both Caucasian campaigns. Those who participated in those events are well aware of how often militants attacked army vehicles lagging behind their army and even entire columns moving away from the base areas. The fact that colleagues were in trouble, sometimes it became known very late. Help was hopelessly late. This was one of the reasons for the introduction of such equipment in the army. As Colonel Vladimir Buravtsev, Head of the Road Service of the Transport Support Department of the Ministry of Defense of the Russian Federation, said during a conversation with Krasnaya Zvezda, during the special military exercise training session at 2012, these complexes, installed on the transport battalions of the Southern Military District Brigade, have already recommended themselves . One of these units is the 1-th Automobile Battalion, where the commander is Lieutenant Colonel Sergey Koshelnikov. It was he who was fully involved in last year’s exercise of the MTO.

The battalion of Lieutenant Colonel Koshelnikov is stationed at a considerable distance from his brigade - in the hero-city of Volgograd. Moreover, weekly dozens of units of equipment work in isolation from the main forces. At present, for example, part of the battalion’s personnel is involved in the development of a military camp in Ashuluk. For a long time, military personnel were involved in the disposal of ammunition at the Ashuluk and Prudboy ranges. It was they who brought the bombs, missiles and projectiles destined for the destruction of bombs destined for destruction. They had the opportunity to participate in the aftermath of the floods in Krymsk. Modern positioning equipment will allow to objectively control the location of vehicles that are far from the point of permanent deployment.

- The system makes it possible to accurately determine the location of vehicles with installed subscriber navigation kits according to the signals of satellite navigation systems GLONASS / GPS. Time-bound data about the location of controlled vehicles are transmitted via GSM cellular communication channels from subscribers to the control center. This ensures the technical closure of the transmitted information, - explains the principle of the "new" lieutenant colonel Sergey Koshelnikov.

And this is not all that gives the use of the equipment developed by “Vector”. For example, in the control center, the obtained information on the location and motion parameters of the CCC is accumulated. Through the Internet, dispatch centers of different levels can exchange it with each other. Moreover, in dispatching centers, various movement parameters of both individual CTS and groups are determined and displayed. Electronic maps of the area indicate the speed, direction of travel and even the time of stops and their duration. The equipment allows you to create and implement automatic control of routes and timetables, without delay signaling a deviation from a given route. In addition, the driver has the opportunity to give an alarm when an abnormal situation occurs.

The commander of a car platoon, Lieutenant Alexei Agishev, whose subordinates performed various tasks during last year's Prudboi test, tested all the capabilities of the system, as they say, on themselves. And he was pleased with it. This is a good assistant for the command, and directly for drivers. Indeed, in the event of an accident or a serious breakdown, they sometimes have nowhere to wait for support. Not at all superfluous is the control over the actions of drivers. Optimization of the states led to the fact that drivers (and this is not only contract servicemen, but also conscript soldiers) in the convoy perform multi-kilometer flights without older cars, which are located only in the cabins of the first car and the technical circuit.

It is not by chance that the equipment developed by “Vector” is installed on the most “efficient” cars of the battalion. The commander of an automobile company, Lieutenant Dmitry Chernobaev, in charge of which are equipped with equipment machines, is confident that the system is in demand not only during the conduct of hostilities. It is also relevant when performing tasks for the centering or other long-distance transport. There are no navigators in KamAZ, and monitoring the movement of vehicles from the control center allows you to adjust their route in case of deviation from the planned one.

Ctrl Enter
Noticed oshЫbku Highlight text and press. Ctrl + Enter
We are
Innovation Day of the Southern Military District: Pictures from the ExhibitionInternal Troops of the Ministry of Internal Affairs of Russia are rearming
Military Reviewin Yandex News
Military Reviewin Google News
9 comments
Information
Dear reader, to leave comments on the publication, you must to register.