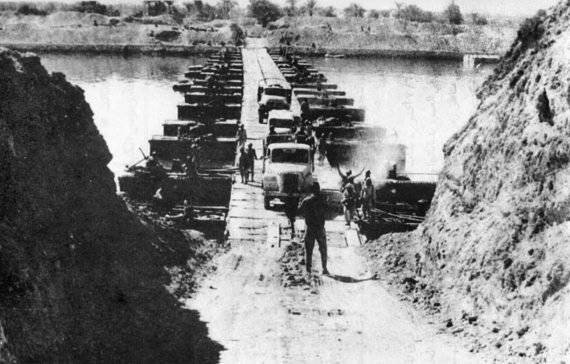 The Middle East, like forty years ago, continues to remain one of the main pain points on the planet. However, if earlier, in the 60-70s, in this region of the world, fierce wars took place one after another, mainly over the territory, in our time everything has changed, and the Egyptian army is now fighting not with the Israeli tanks, but with their own demonstrators.

The former allies of the Egyptians - the Syrians are also busy only with their internal problems. In Syria, a bloody civil war is raging, the end of which in the near future, apparently, is not foreseen. The eternal enemy of these Arab countries - Israel is still surrounded by unfriendly states, or simply by enemies, moreover, though self-made but from Hamas, from time to time, fall on the heads of Israelis. In addition to the citizens of these countries, few people in the world now remember in detail how Egypt and Syria, on the one hand, and Israel, on the other, launched a large-scale war in this region, some for returning their former ancestral lands, while others defended their very right to exist of the state.

In the autumn of 1973, hundreds of thousands of soldiers and officers, several thousand tanks, infantry fighting vehicles, armored personnel carriers, many different artillery systems, hundreds of airplanes and helicopters met each other on the battlefields of the Sinai desert and on the Golan heights. It was at this time that the fifth war of the 1973 of the year began, known as the "Doomsday War", then the 6 of October 1973 of the year, on the Day of Judgment, the holiest day of the Jewish calendar, Egypt attacked Sinai and Syria on the Golan Heights.

Of all the six Arab-Israeli wars, it was this fifth war that turned out to be the most difficult and even tragic for Israel, it was then that in October 1973, Israel actually had a question whether it would remain a state or not.

Then in early October, as a result of the breakthrough of the line of Barlev and the defeat of the Israeli units, the road to Tel Aviv was actually opened. The front commander Shmuel Gonen, having lost control of the situation, was forced to hand over the command to Ariel Sharon.

Doyen (senior) of the Soviet military diplomatic corps in Egypt, Admiral N.V. Iliev and Ambassador V. Vinogradov recommended A. Sadat to take advantage of the success and continue the offensive. However, the Egyptian president did not heed their advice, saying: "I have a different tactic. Let the Israelis attack, and we will beat them." Perhaps this decision by A. Sadat saved the world from the Third World War. In any case, as it became known later, allegedly on these crucial days, Israeli Prime Minister Golda Meir ordered the suspension of nuclear bombs on special squadron aircraft. 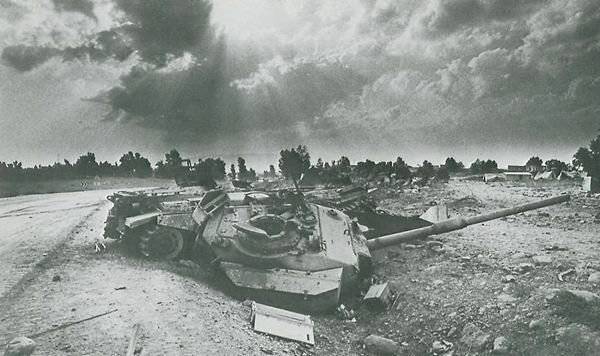 The fact that the fifth Arab-Israeli war turned out to be the most ambitious is said by such facts and figures before the outbreak of hostilities, the Egyptian Armed Forces after mobilization numbered 833 thousand people (of which in the operational troops 310 thousand people). The Egyptians launched 2 armored divisions, mechanized divisions 2, 8 20 infantry divisions and brigades of self-propelled (1 Presidential Guard Brigade, Airborne 3, 3 special purpose, tank 3, 1 tactical missiles, 1 3 engineering and artillery).

The closest ally of Egypt, the Syrian army after mobilization, consisted of 332 thousand soldiers and officers (in the operational troops 140 thousand). The ground forces consisted of 2 tank divisions, 3 infantry divisions, 21 self-propelled bp. battalion and battalion of the Desert Guard. 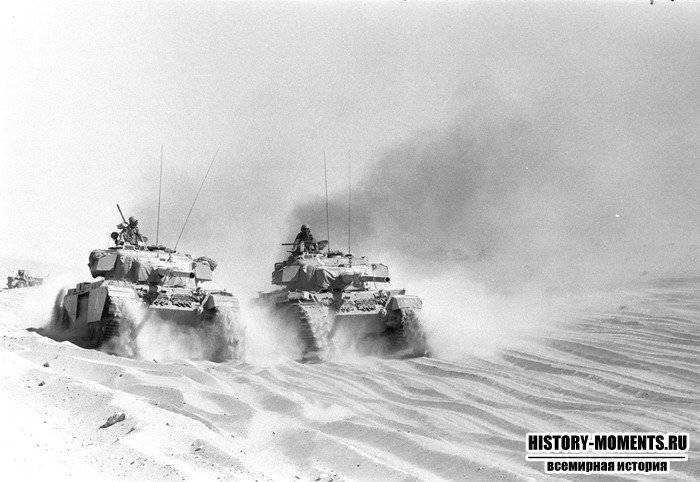 In addition, troops of other Arab states also acted on the Syrian front. Iraq provided 3-Panzer reinforced structure (20 thousand. Man, 300 tanks, 300 APCs, 54 guns) as well as 73 aircraft (18 MiG-21, 7 MiG-17, 32 Su-7 and 16 Hawker Hunter), Jordan and Saudi Arabia for the armored brigade, Morocco for the mechanized brigade, and the Palestine Liberation Organization for the 2 brigade of special purpose.

After the shame of the six-day war, rearmament, or rather, the reconstruction of the armor power of the Arab armies in 1967 — 1973. It was conducted at an unprecedented pace, and all this under the guidance and with the direct participation of the main ally of the Arabs, the Soviet Union. For example, Egypt during this time received from the USSR 1260 tanks T-54 / 55, 400 T-62, 750 armored personnel carriers BTR-50 and OT-62, 150 of the newest BMP-1 armored personnel carriers, armored reconnaissance vehicles BRDM. The supply of weapons to Syria was no less ambitious. Moreover, the Soviet military specialists undertook all the combat training of the Arab armies.

Particular attention was paid to the air defense of armored units, which received the Kvadrat mobile missile system and the Shilka ZSU. As a result, the anti-aircraft defense of the mobile units of the Arab army increased dramatically, especially clearly at the initial stage of the hostilities, when the Barlev line was stormed, when an Egyptian air defense umbrella was created over the advancing Egyptian ground forces, which Israel could not overcome.

As a result, by the beginning of the hostilities, the Egyptian army counted only about 2200-2400 tanks and self-propelled guns, its ally in the Syrian army was armed with a pretty decent amount of armored vehicles, about 1350-1820 units. tanks and ACS. Thus, the whole armored armada, counted from 3500 to 4000 units. armored vehicles were preparing to simultaneously attack the IDF positions in two directions at once.

Israel, as if it had once been Germany, was planning to impose a war on two fronts at the same time, only with the essential difference that thousands of kilometers lay between the Eastern and Western fronts in Europe, and there was only a dozen kilometers between Sinai and the Golan Heights , so that the slightest mistake or instability of the defense of the troops in the positions could easily lead Israel to a complete disaster.

Unprecedented power was then concentrated in the hands of the Egyptian-Syrian command, and this is not counting their allies - the armies of Iraq, Jordan, Morocco, etc., however, as all subsequent events showed, all this modern technology, all this military power turned out to be rather inept hands. 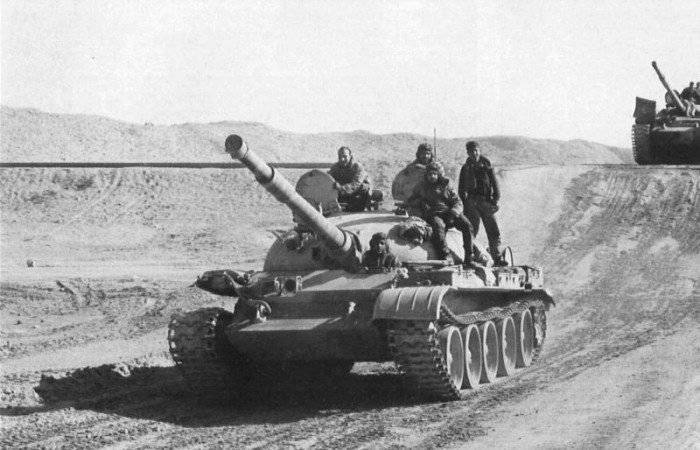 In response to preparations for the invasion of its Arab neighbors, it is known that Israel made only partial mobilization. At the time of the outbreak of hostilities his army numbered 110 thousand people. The ground forces consisted of 4 armored, 9 mechanized, 1 motorized, 1 airborne and 3 artillery brigades.

After mobilization, the size of the army increased to 415 thousand (of which 310 thousand in the operational forces). After mobilization, ground forces were to consist of 40 brigades (of which 20 tank, 12 motorized and mechanized, 4 paratrooper and 4 artillery), organized in 12 divisions.

The main supplier of weapons and the main ally of Israel after the 1967 war, remained the United States, which, despite the embargo announced to Israel, began to actively supply various military equipment and armaments to the country, including the most modern 150 units at that time. tanks M60А1.

During the 1967 war, the 200 tracked BNR M113 was quickly received from the United States. In 1972 — 1973 from the same 448 of armored personnel carriers and command-staff МХNUMX based on М577 came. Another source of replenishment of the fleet of infantry carriers was the captured technology: captured BTR-113P and its Czech variant OT-50 “TOPAZ”.

However, the American supply of modern weapons was clearly not enough, and the Israelis were quite actively engaged in amateur modernization of all the equipment that they had in service, for example, the modernized, improved “Centurion” later received its own Israeli name “Shot” (“Knut "); unofficially the tank was called “Ben-Gurion”.

By the beginning of the 1973 war, most of the Israeli Centurion 700 had been converted into the “Shot” version. Trophy armored vehicles of Soviet production were also actively modernized under the Israeli standard, for example, L54 guns and American machine guns were mounted on several hundreds of T-55 / 7 Arabs seized from Arabs. On the part of these tanks diesel engines were replaced, also on American ones.

In the Israeli armed forces, the upgraded T-54 received an index T-67. Were adopted and captured PT-76, which replaced the machine guns and radio communications equipment.

Thus, the IDF tank park by the fall of 1973g. consisted mostly of obsolete, modernized on their own, modifications of tanks and armored personnel carriers acquired from the arsenals of England, France, captured Arab trophies of Soviet manufacture and received from the United States, mainly modern samples. 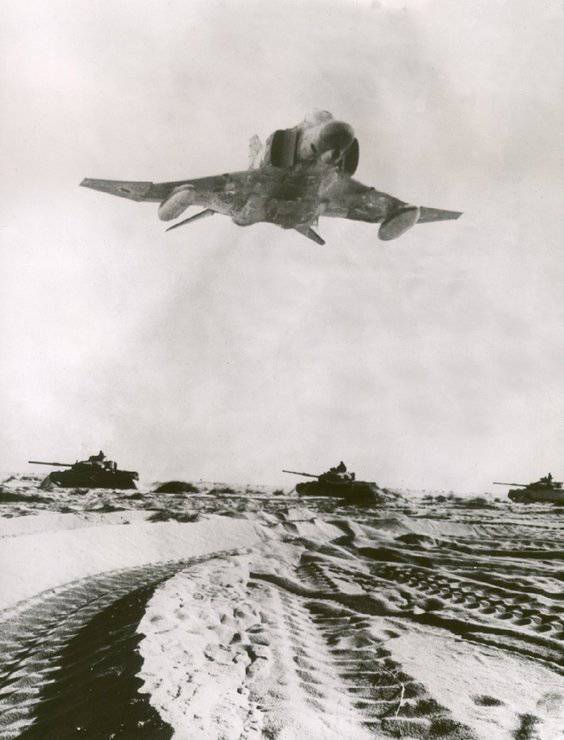 Fighting in the "Doomsday War" was not long, only 18 days were completed and 25 October 1973 officially ended. On the whole, the fifth Arab-Israeli war ended as the previous four, again with the complete defeat of the Arab armies and only active Soviet intervention, saved Egypt and Syria from complete disaster and additional territorial losses.

As a result of this rather large-scale, but short-term war, military experts noted that the Arab armies acted successfully and competently, only at the initial stage of the operation, this is when they broke through the defense of Israelis on the Barlev line in Sinai.

The actions of the Israelis are an example of competent active defensive actions in the course of this entire military company. So on the Sinai Peninsula, they demonstrated a blow to the center of the Arab position, which also turned out to be not occupied by the enemy (the Arab command did not allow the possibility that the Israelis could cross the channel, although they themselves had just demonstrated such a crossing). The center of the Arab position was, naturally, the northern shore of the Big Gorky Lake. It was this point that bound both Egyptian armies. With the loss of its all interaction between the armies ceased - the channel, which with such difficulty managed to force, became a barrier in the rear of the Egyptian troops.

In Syria, it was demonstrated that one blow, however strong, can be localized. A counterblow method was applied on the basis of the attacking group from both sides. The geometry of the offensive is always such that the depth of the offensive is greater than the width, so a bilateral counterstrike reaches its goal earlier than the advancing enemy forces. 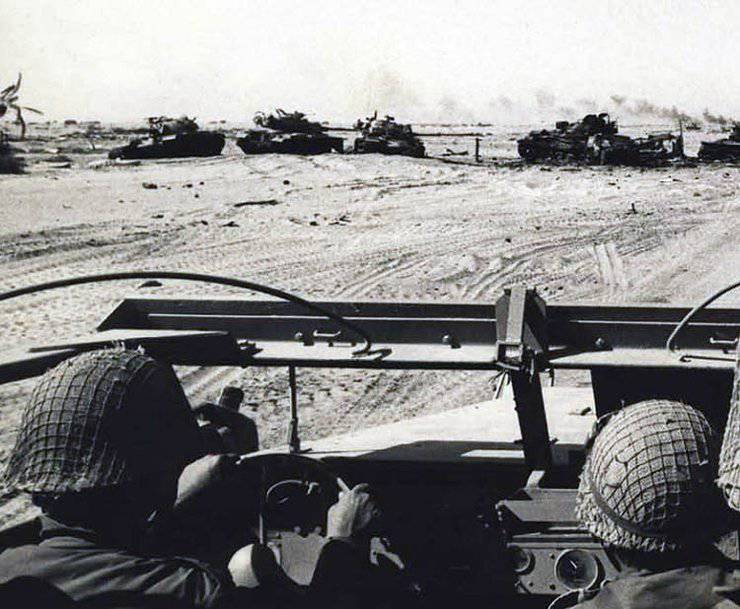 However, in the book “Modern tanks” by B.S. Safonov and V.I. Murakhovsky it is written that “losses amounted to at least half of the available tanks,” that is, of the order of 850 machines. Such a significant discrepancy in the Israeli casualty figures can be explained by the fact that the battlefield was left behind by Israeli troops, and their repair units were able to repair damaged vehicles, both their own and the Arab ones, since the experience of operating the Israeli T-55 and PT- 76 already existed.

Results of the war 1973g. in general, were not in favor of the Arab countries. With the mediation of the USSR and the USA on October 24, hostilities were stopped on the Syrian front, on October 25 in the Egyptian one.

After the negotiations in January 1974, Egypt and Israel signed an armistice agreement. Syria and Israel reached an agreement on disengagement four months later. The Israeli forces left the west coast of the Suez Canal and El Quneitra, retaining, however, control over the Golan Heights.

Ctrl Enter
Noticed oshЫbku Highlight text and press. Ctrl + Enter
We are
How Stalin created Israel. By the 66 anniversary of the independence of IsraelGolan Heights on fire
Military Reviewin Yandex News
Military Reviewin Google News
111 comments
Information
Dear reader, to leave comments on the publication, you must sign in.