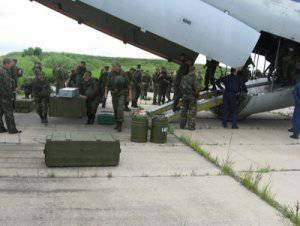 For the first time, an RCB reconnaissance detachment, Lieutenant Colonel Vladislav Silence, made a transcontinental shot at the exercise.


On the night of 13 July, with the start of a sudden comprehensive inspection of the troops of the Eastern and Central Military Districts, by the decision of the Chief of the Radiation, Chemical and Biological Defense Forces of the Armed Forces of the Russian Federation, the forward detachment from its mobile reserve — the 1 mobile RHB protection brigade — was sent to the exercise area in the Far East CVO. The compound of Colonel Roman Popov was alarmed and alerted. The forward detachment of the brigade, which was headed by the commander of the battalion of the RCB reconnaissance lieutenant colonel Vladislav Tishin, was promptly formed. According to the decision of the brigade commander, this joint detachment was equipped with the most modern special equipment for conducting radiation, chemical and biological reconnaissance. Including reconnaissance chemical machines РХМ-6 and mobile laboratories. Subordinate to Lieutenant Colonel Vladislav Silence was to be airborne intercontinental range from the Center of Russia to the Far East. From the Shikhansk chemical test site in the Saratov region, this unit of the brigade needed to be redeployed to the Sibirtsev test site in the Primorye Territory in just a day and a half. 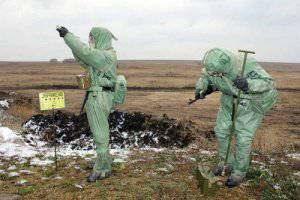 The mobile RCB protection team of Colonel Roman Popov is a direct reserve of the Chief of the Radiation, Chemical and Biological Defense Forces, Major-General Eduard Cherkasov (in the picture). He explained to your correspondent that this is the only military unit in the Russian army of constant combat readiness, which is aimed only at eliminating the consequences of accidents and man-made disasters. In addition, at the appropriate time, it is applied according to the plans of the General Staff of the Armed Forces.

By the way, the warriors of this brigade meet each period of summer combat study as a holiday. The fact is that 1 Jun in the 1-th mobile brigade of RCB protection celebrates the day of the part. The solemn removal took place in front of the personnel of the Battle Banner and Pennant of the Minister of Defense "For courage and military valor." As the deputy star of the brigade for work with personnel, Lieutenant Colonel Vladislav Solodin, told the Red Star, the compound turned 34 of the year. It is based on the date of the formation of its predecessor, the 122 of the mobile emergency response squadron:

- Our fellow soldiers distinguished themselves in the aftermath of the accident at the Chernobyl nuclear power plant, for which the 38 soldiers were marked with military orders and medals, and the USSR Minister of Defense noted the feat of the mobile unit Vimpel "For courage and military prowess." Our brigade’s flamethrower warriors participated in combat operations during counterterrorism campaigns in the North Caucasus. 56 servicemen were awarded military orders, and the platoon commander, Senior Lieutenant Ilya Panfilov, was awarded the high title of Hero of Russia. 11 warriors of the brigade fell in battles with the enemies of Russia. 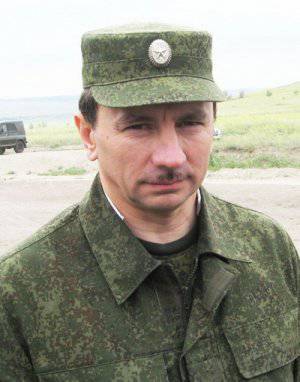 In 2010, on Victory Day for the first time in history Part of the personnel of the brigade in the company of heavy flamethrower systems TOC-1A "Solntsek" participated in a military parade on Red Square. And now every year the servicemen of the brigade pass through the main square of the country and sneak their Fighting Banner. Such an honor by the top leadership of the state was rendered only to the best parts of the Armed Forces ...

This time during the exercise, according to the instructions of the General Staff representatives, subordinates of Colonel Roman Popov, as part of a sudden check of the combat readiness of the troops of the two military districts, the Far and Military Transport aviation The Air Force was given the task of helping to localize the consequences of a man-made disaster for the 16th brigade of the Russian Chemical Forces in defense of the Eastern Military District. This conditional emergency occurred on the territory of the Siberian Combined Arms Testing Ground - about 80 kilometers north of the city of Ussuriysk. According to the idea of ​​the training, the consolidated detachment, created on the basis of the RFB protection compounds of the BBO and CVO, was to eliminate the consequences of the accident at an industrial enterprise that uses highly toxic and radiation materials in the production, as a result of which both toxic and radiation substances were released into the atmosphere.

So, the units of these two compounds of the RCB protection were to meet and begin to jointly operate in a small combined-arms range in Primorye. But the 16-I separate brigade of radiation, chemical and biological protection of the Eastern Military District for this, marched under its own power on the ground from the city of Khabarovsk, overcoming the distance of 800 kilometers. And the forward detachment from the mobile reserve of the Chief of the Troops of the RCBZ should have made a transcontinental air throw with a range of 10 times more — over 8.000 kilometers, not counting over two hundred kilometers of crossings under its own power over the ground.

A convoy of the advanced detachment of Lieutenant Colonel Vladislav Silence, accompanied by VAI vehicles, made a march over 130 kilometers on a standard vehicle to the loading airfield at a strategic airbase in Engels. Here, by order of the commander of the military transport aviation of the Air Force, Major-General Vladimir Benediktov, a BTA detachment arrived in the number of 10 heavy military transport planes Il-76MD. Having loaded on these "workhorses" of the BTA reconnaissance chemical machines РХМ-6, mobile laboratories and other special equipment, the forward detachment of the brigade was transferred without delay by BTA aircraft to the Vozdvizhenka airfield near Ussuriysk.

After landing at the other end of the continent - friendly, quick unloading of weapons and military equipment from aircraft. And again march through the land. Subordinates of Lieutenant Colonel Vladislav Silence went to the place indicated on the map at the Sibirtsevsk Arms Ground. The meeting took place on the banks of the Monastyrka river. Here, representatives of the two compounds of the RChB protection of the BBO and the Central Military District began the formation of a consolidated detachment of radiation chemical and biological protection. And in the course of the exercise, we began joint work on the localization of the consequences of a conditional man-made disaster.

The chief of staff of the battalion of the RCB reconnaissance, Major Alexei Antonchev, organized a reliable connection with subordinate reconnaissance units, receiving data from the analysis of soil and air samples by mobile laboratories. The subordinate commanders of the RCB reconnaissance platoon of senior lieutenant Igor Rudkovsky worked reliably. The success in their combat work was facilitated by the equipment in service - the reconnaissance chemical machines РХМ-6. They are created on the basis of the BTR-80 and are intended for conducting radiation, chemical and non-specific biological reconnaissance, ensuring the transfer of reconnaissance data to an automated troop control system. Their equipment allows for one minute to detect vapor and aerosols of toxic and harmful substances on an area of ​​more than 10 square kilometers and at the same time to make all the necessary measurements without leaving the car. The onboard space navigation system allows all-weather automatic determination of topographic and geodetic coordinates, the position of the vehicle on the ground, displays the RHB situation on the terrain map in real time and transmits data to the command post of the connection.

When reconnaissance detachment reconnaissance officers arrived in the area, they immediately began to identify and assess the radiation, chemical and biological situation, the scale and consequences of the destruction of dangerous objects. The detachment forces organized the evacuation of citizens from the zone of infection, organized posts where degassing, decontamination, and disinfection of citizens and equipment evacuated from the area of ​​infection was carried out. The subordinates of Colonel Roman Popov coped with their task. According to him, the experience gained at this exercise will be summarized and used in the training of officers and personnel of the formation.