Biological weapons: to find and eliminate 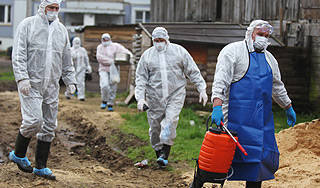 The media repeatedly published materials that described the dangerous experiments conducted by the United States in the territories of some countries of the former USSR, and laboratories where the causative agents of the most dangerous diseases are grown.


The Russian Foreign Ministry officially warned the US about the inadmissibility of further escalation in this matter and the need to urgently stop the work of such "enterprises."

Another 18 of May 2011, in the article “Mikhail Saakashvili with the help of the USA continues to threaten viruses”, was told that, according to French journalists, Georgia under the guise of implementing a program to prevent the spread of biological weapons working on the creation of various viruses in its territory. In particular, microbiologists and virologists of the United States (Institute of Medical Research on Infectious Diseases of the US Army (USAMRIID, Fort Detrick) and Georgia (Institute of Bacteriophages, Microbiology and Virology of Tbilisi, Georgia) are conducting studies of the causative agents of cholera and new methods for their identification. "(End quote ).

8 June 2012, Valentin Evstigneev, Lieutenant-General M / s, retired, former head of the Department of Biological Protection published on the portal "The World and Us" the material "Deadly Threat: Bio-PRO in American Way". In particular, it stated:

According to experts, the internal threat in the States is growing, which comes from the activities of its own scientific institutions that have received the right to work with “list” biological agents from the state. According to published data, as of 2006, there were officially more than 400 such institutions in the United States. Of particular concern is that the process of expanding the biohazard laboratory base is out of control of the authorities. However, even the FBI can not accurately determine the number of biosafety laboratories operating in the country.

Experts conclude that the centers created to solve the tasks of combating bioterrorism have themselves become the source of new threats and not only on the scale of the United States. Due to poor control, facts of loss and theft of dangerous microbes and viruses, acts of “postal” bioterrorism using the anthrax pathogen, attempts to gain access to technologies and dangerous pathogens from mentally unbalanced citizens, criminal and other socially dangerous individuals have become possible.

Such “liberties” are not only an internal affair of the United States, but also the subject of attention of international law.

According to experts, the internal threat in the States is growing, which comes from the activities of its own scientific institutions that have received the right to work with “list” biological agents from the state. According to published data, as of 2006, there were officially more than 400 such institutions in the United States. Of particular concern is that the process of expanding the biohazard laboratory base is out of control of the authorities. However, even the FBI can not accurately determine the number of biosafety laboratories operating in the country.

Experts conclude that the centers created to solve the tasks of combating bioterrorism have themselves become the source of new threats and not only on the scale of the United States. Due to poor control, facts of loss and theft of dangerous microbes and viruses, acts of “postal” bioterrorism using the anthrax pathogen, attempts to gain access to technologies and dangerous pathogens from mentally unbalanced citizens, criminal and other socially dangerous individuals have become possible.

Such “liberties” are not only an internal affair of the United States, but also the subject of attention of international law.

Since 1992, the territories of the countries of the former USSR were in the BioPRO sphere. In Washington, they are traditionally regarded as a potential source of dangerous pathogens and technologies for the creation of biological weapons, as well as specialists with relevant theoretical training and practical skills. Now the partners of the United States under this program are sovereign states on the perimeter of Russia: Ukraine, Azerbaijan, Armenia, Georgia, Kazakhstan, Uzbekistan. In Kyrgyzstan, Canada controls general circulation of potentially dangerous biomaterials in the country.

According to foreign experts, in the long term, the BioPRO “umbrella” should expand beyond the borders of the CIS. Afghanistan, Pakistan, Burundi, Kenya and Uganda should be in its coverage area, and then India, Iraq, Tanzania and South Africa should go. Pentagon’s total expenditures for this purpose in 2012 will be more than 260 million dollars.

In the US, they do not hide the satisfaction of the results already achieved: Azerbaijan, Georgia and Kazakhstan have so far transferred national collections of pathogenic microorganisms to the Institute of Pathology of the US Armed Forces. Tbilisi presented the Americans with all collections of anthrax, brucellosis, plague and tularemia, Baku “shared” unique strains of plague, anthrax, cholera and other dangerous diseases, Astana provided a collection of plague and anthrax strains.

At the same time, experts are talking about the reorientation of the former Soviet republics to the American standards of sanitary and epidemiological surveillance and their continued creation of biological monitoring centers controlled by the United States.

In other words, our closest neighbors are giving the Americans the right to assess the level of biological threats on their territory and make decisions on the use of appropriate countermeasures.

The fact that their fears are not unfounded is indicated, for example, by data in the press about the functioning of the Georgian-American laboratory in Alekseyevka headed by the former head of the Georgian intelligence service A. Zhvania. Moreover, her work is supervised personally by E. Weber, Advisor to the US Secretary of Defense for Nuclear, Chemical and Defense Programs. It is known that military personnel of the US Army work in this center, and the experiments are conducted in the conditions of the strictest secrecy.

The Armenian edition of “Yerkramas” assumes that applied research is being conducted in the laboratory on the combat use of biological attack weapons.

On the involvement of the Georgian-American center in Alekseyevka to the spread of the African swine fever virus in the Russian regions in one of the recent speeches, said the chief sanitary doctor of Russia G. Onishchenko. Regarding this situation, specialists put forward two most likely versions: a man-made accident that caused a leakage of a genetically modified strain, and deliberate actions by Georgia (for example, dumping carcasses killed by the swine virus into the Inguri river) with the aim of causing environmental damage to South Ossetia, Abkhazia and Russia.

At the same time, the center in Alekseyevka is far from being the only institution near the borders of Russia, where Americans can conduct research in the field of developing biological weapons. Reports appeared in the foreign press about the creation of such laboratories on the basis of anti-plague stations in Baku and Simferopol, as well as in the Kazakhstan Scientific Center for Quarantine and Zoonotic Infections named after M.Aykimbaeva in Alma-Ata. (End quote)

Today, Russian diplomats have the following complaints against the United States:

- The United States unfoundedly alleges that Russia is violating obligations under the Convention on the Prohibition of Biological and Toxin Weapons (BTWC);

- The American side does not provide any evidence of this;

- at the same time, the US itself is blocking the creation of a verification mechanism within the framework of the BTWC, which would completely eliminate the “American concerns”;

- to the USA there are questions “in connection with the involvement of a number of American organizations in large-scale biological activities of dual use”;

- such organizations act to the extent permitted by international law - the results of their activities "may be used in contradiction with Article I of the BTWC purposes";

- it is possible that some objects under the jurisdiction or control of the United States that participated in military biological programs have not yet been destroyed or redeveloped for peaceful purposes, as required by Article II of the BTWC;

- finally, the main thing is “the biological activity of the US Department of Defense near the Russian borders also causes serious concern.

Thus, there is an increase in threats of spreading on the territory of Russia epidemics of the most dangerous and, possibly, so far completely unknown diseases for which, for obvious reasons, there are no methods of treatment yet.

In the absence of effective international control over the activities of such laboratories, it would be unpardonable optimism to believe that the Americans themselves are able and will use such developments only "for the good of mankind."

The ongoing scandal of disclosures made by former CIA officer Edward Snowden suggests that, on the contrary, the United States uses the means at its disposal to achieve goals that are very far from the ideals of democracy and respect for human rights.

As you know, p. 4 Art. 2 of the UN Charter states: “All Members of the United Nations shall refrain in their international relations from the threat or use of force against the territorial integrity or political independence of any state, or in any other way incompatible with the goals of the United Nations”.

It seems that by creating a ring of biological weapons laboratories, the United States would like, if not to bypass, then at least to maximize the letter and content of these provisions from its own interests, since it can be very difficult to establish the fact of aggression with the use of biological weapons. In turn, this may always create for the probable aggressor the temptation to use such weapons.

At the same time, it is naive to believe that Russia will be watching for an infinitely long time, as the threat of the proliferation and use of biological weapons is growing near its borders.

It is possible that during the "August 08.08.08 war" the Russian special services obtained reliable data on the work being carried out on the territory of Georgia in this direction. This allows for the time being to control the situation by peaceful diplomatic methods.

By the way, it would be quite reasonable and logical to conduct a parliamentary investigation by the Georgian parliament regarding the legality of the laboratory’s work in Alekseyevka.

However, if such laboratories continue to function in violation of international agreements in this area, it would be reasonable to apply Art. 51 UN Charter in practice. And she says:

- This Charter does not in any way affect the inalienable right to individual or collective self-defense if an armed attack occurs on a Member, until the Security Council takes the measures necessary to maintain international peace and security. The measures taken by Members in the exercise of this right to self-defense should be immediately communicated to the Security Council and should in no way affect the authority and responsibility of the Security Council, in accordance with this Charter, to undertake such actions at any time as it deems necessary. maintaining or restoring international peace and security.

Thus, if reliable and verified information about plans to use biological weapons appears, especially in the light of the Winter Olympics in Sochi, the Russian special services will have the right to take preventive measures to eliminate the threat if there is an appropriate political decision of the country's leadership.

And we are not talking about military actions in the traditional sense. As you know, there are other ways, in particular, special operations.

Another question is how the disclosure of information about the activities of such secret laboratories will affect the already significantly tarnished image of the United States of America as a world center of democracy and the protection of human rights.

Ctrl Enter
Noticed oshЫbku Highlight text and press. Ctrl + Enter
We are
Awakening American BiolabsNikolay Silaev, Andrei Sushentsov: Georgia after the elections and prospects for Russian-Georgian relations
37 comments
Information
Dear reader, to leave comments on the publication, you must to register.