Bulk on the liberal iconostasis, or Prosecutors, gifts bringing (Review of the reactions of different parties) 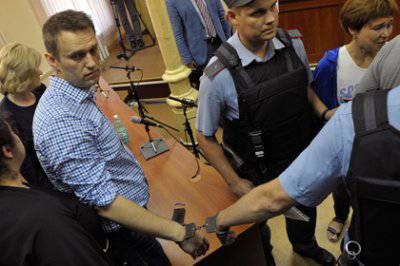 Let's see that now, as they say, in the "advanced" trend. In the trend, shouting that instead of Russian sportsmen-students at the Universiade in Kazan, either cyborg, or newcomers, or shaved snow-covered “people” performed. In the trend to declare that Snowden must necessarily be given out to the United States in order not to harm Russian-American friendship (why, sorry? ..) In the trend to argue about the urgent need to legalize same-sex marriage in Russia. In the trend, it is pious to believe that the “Magnitsky Act” is aimed exclusively at Russian corrupt officials from among federal and regional officials.


But since July, in the liberal sector of Russia and the entire “progressive” part of the planet, a new trend: to stigmatize the sentence of the Kirov court, which “closed” the former adviser to the Kirov governor, the current candidate for mayor of Moscow, the constant torch of the all-Russian (as he positions himself) -systematic opposition Alexei Anatolyevich Navalny for a five-year term with the need to serve this term in a penal colony. At first he “closed”, then released on his own recognizance, no less, at the request of the public prosecutor ... “Ceremonial” release from custody was allegedly due to the fact that the very taking into custody before the sentence comes into legal force violate the right to vote of Mr. Navalny as a candidate for mayor of the capital. In general, Daria Dontsova with her intricate detective stories, as they say, nervously smokes on the sidelines ...

For a couple with Navalny, Peter Ofitserov (general director of VLK) was also sentenced to a real term, who, obviously, during the announcement of the real prison sentence, thought: why the hell did I get in touch with Alexey Anatolyevich ... On what grounds were they released from - The guards of Ofitserov are a mystery, for he seems to be not running for mayor of Moscow ...

However, the officers of the liberal public and even more so the Western "comrades" are of little interest, and therefore the whole emphasis on waving their fists fell on the verdict against Navalny. In the cities of Russia on Thursday evening (on the day of the announcement of the sentence) in the parks and squares among the people who went for a walk with children and four-legged friends, “fighters for justice” appeared. The wrestlers differed from the rest in one nuance: posters in the style of “Putin is afraid of Navalny” or “Freedom to political prisoners” were hung on their necks. Of course, I was scared ... To support Assad is not, Snowden in Russia is not to keep, the anti-magnetic law to sign is also not, but you understand, I was afraid of Navalny ... So I told the Kirov judge: Blinov, I'm afraid of this Navalny ka him "five" ...

These “freedom fighters” (wrestlers are commoners) somehow conjugate 16 million-theft from the political component ... Apparently, where theft goes through the millionth (billionth) bar, the field of “political persecution” begins. If so, then we even have Ms. Vasilieva and others like her have every chance to get a non-system-opposition status of "persecuted for political reasons". I stole it from the state - I let the money down (some on brunettes, some on opposition “festivities” - sat - everything! - a political prisoner! Also one of the new trends ...
We present to your attention a selection of materials that appeared in the Russian and foreign media regarding the sentence imposed on Alexei Navalny.

TV channel N24 and personally Christoph Wanner (Germany):
In Russia, the affairs of those who publicly dare to become an opponent of the Kremlin are really bad. We do not know where Russia is going, which is becoming, objectively speaking, more and more authoritarian.

Well, of course, they are bad ... Oh, how bad they are for Mikhail Sergeyevich Gorbachev, who, for the collapse of the USSR and the criticism of the restoration of Russia's support, is even being given the highest state awards. Of course, it’s bad when ex-premier Mikhail Kasyanov and ex-vice-premier Boris Nemtsov, receiving foreign funding (they are pushing themselves behind him) feel at ease, throwing mud at not only Russian authorities, but frankly translating into the status of idiots the majority of the Russian population only for the fact that this part, you see, voted for the same Putin.

Our friend" Senator John McCain:
The conviction of the Russian anti-corruption activist Alexei Navalny is not only a complete farce, but also a deeply tragic event, especially for Russia.

A good fighter ... If in Russia, in order to fight corruption, you must first replenish your account with 16 "lemons" with stolen money, then this struggle gives a tatty smell ... Recall that Alexei Navalny became known to the public for his project "RosPil", in which branded corrupt officials on what the world is worth. In addition, Navalny is the author of the acclaimed abbreviation "PZhiV". And Navalny repeatedly found himself in the courtroom, but surprisingly left it, slightly shaking it off - without any negative consequences for himself. Of course, a complete farce, and you can't say differently ...

Another "friend" of Russia (the author of the "Magnitsky Act") Benjamin cardin (senator):
The current political conviction of Alexei Navalny shows that Russia continues to turn to the dark times of the Soviet Union, when the courts were a tool of tyranny, and not legitimate defenders of the rule of law.

Well, we know that the most correct courts in the United States. After all, only US courts can accuse a person of trade weapons and throw in jail for many years, after watching the militants. Only American courts can justify a person who locked up a foster child on 40-degree heat in a car, where he died. Only in the USA can the judicial system prey on people who have told the world the truth about the dirty work of Western intelligence agencies. Where are our courts to the US! And only in American prisons you can get without any trial or investigation (Guantanamo - as an example).

Sky News (United Kingdom), Katie Stallard calls the verdict of Navalny "the morning tragedy." Next, faint of heart, please move away from their monitors or "scroll" page a little lower (author's note).

This is a young father who has already said goodbye to children. He said that he had come to court with slippers and clothes, which he would take in prison if he was found guilty. His wife is next to him in court. She listens to all this with a bowed head.

Indeed, the tragedy ... It would be better if Alexei Navalny prepared his slippers at the moment when he published fake materials on his blog about how allegedly columns of army armored vehicles enter Saratovsky Pugachev. For some reason, the British correspondents did not see the tragedies here ...

Great-grandmother of the Russian opposition Lyudmila Alekseeva declares that with the sentence of Alexei Navalny, Russia discards itself during the USSR (not the same sheet with the text used by Senator Cardin, fell into the hands of Lyudmila Mikhailovna - author's note) ... At the same time, Mrs. Alekseeva urges the West to fight against the fact that today happening in Russia.

Who would doubt what great-grandmother Lyudmila would call for ... This is one of her immediate responsibilities. In 1991, it must be admitted, Lyudmila Mikhailovna fulfilled the investment in herself in full. It is a pity, only the order in the entire chest was not given. Although, perhaps, we just do not know about this.

Also, the US Department of State, members of the European Commission and even the President of Estonia personally expressed their extreme concern about the verdict. mr Ilves:

I am outraged. Today’s sentence leaves the impression of a politically motivated court in Russia.

In the cohort of the perturbed it turned out and Mikhail Saakashvili:

Today, by decision of the Russian court, Alexei Navalny was arrested on charges of fraud. The conviction of the main fighter against corruption and fraud by the Putin regime is a classic manifestation of the cynicism of today's official Russia ... I express great indignation at the unfair arrest of a Russian civil activist.

The overall impression is that the same text was centrally sent to all the “victorious democracies” of the world, and the task of the heads (and other representatives) of these democracies was only to dilute the textual information with additional keywords from the set: cynicism, return to Soviet era, authoritarianism, the political process, corruption, the Putin regime, and so on.

However, it is not necessary to think that the world community (with its internal Russian segment) was covered by exceptional paranoia about the sentence to the forester and the oppositionist. There are those publications (including foreign ones) that are not inclined to approach a court decision regarding Navalny with an exceptionally negative emotionality, forgetting about the very essence of the accusation.

In particular, the French journalist Pierre Lorrain urges his compatriots not to fall into hysterics about the "politicization" of the process over Navalny, but to take a closer look at the documents on the case of embezzlement in Kirovles. Lorrain is sure that the documents are clear proof of Navalny’s guilt, and those who are trying to get a politician involved are not at all familiar with the case.

Honestly, this time surprised magazine "Forbes"which somehow fell out of the general trend and told (in the material of Mark Adomanis) that it was Navalny that a few days earlier with his lie almost provoked a bloody massacre in the Saratov region (what we said above). Adomanis, not without irony, calls Navalny "a beloved liberal," who actually endorses the split of Russia with the secession of the North Caucasus, which he openly calls for with his "materials".

Mikhail Leontiev decided this time to speak out in the spirit of the fact that the current government with Navalny clearly overdone. According to Mikhail, for Navalny, serving time in the “dungeons of the regime” will benefit: he will gain strength, reach, quote: “the milky-wax ripeness of the opposition leader”. They say that the government thereby inserts itself into the wheels at the level of a certain political masochism.

Well, to comment on this point of view is difficult. After all, it turns out that the Kirov court had to justify Navalny for his theft — this is one time, or the investigation shouldn’t have been distributed initially, that the Navalny comrades were tyrili and the money was putting themselves in a pocket — these are two.

But the theft has spread, and after that it’s somehow stupid to back down. What is the bust, if we take this case as an ordinary criminal? - unclear. If we take it as a political a priori, then Mikhail is probably right. But only to accept this business as such - by putting down Putin’s accounts with Navalny - somehow, neither the hand nor the tongue is raised. Different levels of person ...

And by and large: why is it so much attention to Navalny? .. Even from state prosecutors, who first themselves declared the need to restrict freedom in the courtroom, and then suddenly suddenly imbued with a feeling of ineradicable humanity that descended from somewhere. But we have such loggers as truth-workers and a small truck. Nothing - let them pogomonyat (this is about the liberal masses), they will let off steam, sweat (this is useful in summer) and calm down (prosecutors out, and they help - a sort of psychological relief service).

Ctrl Enter
Noticed a mistake Highlight text and press. Ctrl + Enter
We are
301 comment
Information
Dear reader, to leave comments on the publication, you must to register.