A wall with barbed wire for the North Caucasus?

July 17 2013
168
After the arrest of the “chief Makhachkala” by Said Amirov, the situation in Dagestan somewhat calmed down. It was naively thought that the law enforcement officers needed only to isolate the mayor of Makhachkala from the criminal organism so that peace and tranquility reign in the long-suffering Dagestan land. However, naivety, as usual, failed, as terrorist attacks in the North Caucasian republics have recently begun to show themselves again. These manifestations prove that if Amirov was (is) the "godfather" of the Dagestan gang-underground, then in the republic and in addition to Amirov there were gentlemen performing orders from those persons whose quiet life in Dagestan is clearly not included in the plans. Or, Amirov’s power is so great that he can even “control” the situation in the republic from the temporary detention center. 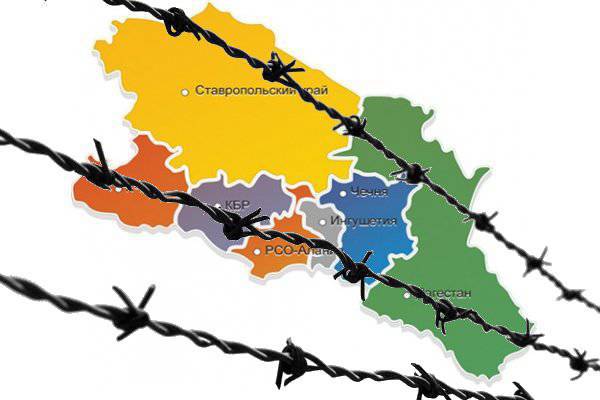 Sunday noon on the road leading from the village of Burshi to Kumukh (the administrative center of Lak region), unknown from the automatic weapons fired on representatives of law enforcement bodies of Lak district. Four police officers who were returning from Burshi at the time after the inspection, according to a local resident’s statement about the theft, were killed on the spot. Immediately, the KTO regime was introduced in the republic, which has not yet helped the security forces to enter the grouping.

Although, frankly, it is strange that it did not help. After all, the ambush, arranged by the bandits on the road, and the call of the policemen in Burshi on the statement about the theft, are in all likelihood related to each other. It is for this reason that it would not hurt the operatives to check the person who called the police to draw up a report on the theft, which has yet to be confirmed. However, we will not go in the direction of the teachings of law enforcement officials, who, it is to be hoped, ultimately determine themselves with productive actions to uncover the crime committed.

A day later, the tragedy broke out in the Tsumadinsky district of Dagestan. In the village of Khushtad, three (according to other sources, two) armed men infiltrated the house of an 61-year-old elementary school teacher Abusupyan Omarov, took the man’s relatives to another room, after which the teachers were shot. The man died from his wounds, and the gangsters, who, obviously, staged a certain version of domestic execution, fled from the scene of the murder. In the Tsumadinsky district, after the tragedy, the Vulkan-4 plan was introduced in Omarov’s house and a criminal case was instituted under Art. 105 ch. illegal arms trafficking by a group of persons.

Ramazan Abdulatipov, who today serves as the head of the Republic of Dagestan, said he requires personal responsibility for what happened with the representatives of the administration of the regions where the tragedies occurred. And the fact that Abdulatipov was not used to throwing words to the wind, stating the need for a systematic (total) fight against terrorism and extremism in the republic, can be judged at least by the arrest of the same Said Amirov, who in many Dagestan seemed unsinkable. If so, the chairs can stagger under the heads of the Lak and Tsumadinsky districts. If operational actions also do not end efficiently, then the heads of district ATS may also lose their posts.

To conduct a multi-stage check of heads of regional administrations, "additional laxity" will be thrown by the FSB and the Ministry of Internal Affairs. It is obvious that after the incident with Amirov, Abdulatipov understands perfectly well that a check carried out by local security officials may not lead to a result. The reason is still the same clanging that has pierced the region, which is one of the main reasons why the situation here is not actually controlled by the central authorities. And if so, then we can expect that in the near future operatives from the federal center may appear in Dagestan in order to “sweep through” local Dagestan officials, who admit the presence of militants hiding in the regions, the rule of law in which is the main task of these same officials.

Let us return to the incidents, which resulted in five violent deaths. At the same time, the attacks are of a completely different, at first glance, character. In one case, gangsters kill policemen - and this, unfortunately, has become the bloody norm for Dagestan, in another case - they are shooting a school teacher. The second episode ranks with the killing of athletes, members of the clergy, medical workers. And the reason for this is most likely the fact that certain forces do not like it, that the Dagestan people do not want to roll into the jungle of that extremist dogma that someone persistently tries to pass off as a branch of Islam. The murder of a teacher clearly reveals the nature of those who went to this heinous crime: to make the people of the republic forget both the classical faith and the secular basis of building a state. Make fear to obey, to comply with the requirements. After all, a people who live in constant fear is much easier to manage than people who are confident in themselves, in their faith, and in their future.

The killing of policemen is a new desire to show that the real power in Dagestan is the power of those who are taking all measures to turn the republic into another hot spot on the map of Russia.

Meanwhile, new extremist attacks in the North Caucasus again served as a pretext for activating those who sleep and see the Caucasus outside of the territory of Russia. Gentlemen, who claim that the only way out for Russia is to fence off from Dagestan, Chechnya, Kabardino-Balkaria and other North Caucasian republics with a concrete wall, on top of which multi-tiered barbed wire has begun, woke up again at comment sites.

And these toncontin1s are many!

Is this a solution to the problem? .. They say that there they will cut each other and shoot each other, and we will sit at this very wire and enjoy how Caucasians are getting smaller. Well, if such a position is to someone's liking, then it is more like a clinical case. After all, if so, then these people themselves paint in their helplessness, in that they cannot keep the country within the borders that have been formed for centuries - it is easier to separate yourself from the problem, like Saltykov's “wise minnow”, rather than try to solve it.

Today - barbed wire for Dagestan, tomorrow barbed wire for the Far East, Kursk and Moscow ... So what ... And why do people who advocate for separating Russia from the North Caucasus (although Russia without the North Caucasus is no longer Russia), do not it occurs to me that in the same Dagestan the overwhelming majority of the population is in favor of finding the Republic exclusively within the Russian Federation, for honest work, for opening new industrial and agricultural enterprises, for the development of sports, medicine, images Hania. Or someone will say that the results of such surveys were rigged by militants who completely captured the media world of the Caucasus. No ... It seems that the extremists did not at all capture the media world, but the mind of individual people who are ready to take the lead from a handful of criminals and replicate the view that Russia and the North Caucasus are not on the way.

And so that no seizures of mind or media from criminal groups and their sponsors take place, it is necessary to systematically erase this evil along with officials who have sold for 30 silver coins. Correct, anticipating, and not hitting the tails ... Corrode not only in the North Caucasus, but throughout the territory of Russia. Road going by walking.

Ctrl Enter
Noticed oshЫbku Highlight text and press. Ctrl + Enter
We are
Results of the week. “I recently believe that everything in life is possible, even that which is impossible”How to incite a new religious war in the North Caucasus?
Military Reviewin Yandex News
Military Reviewin Google News
168 comments
Information
Dear reader, to leave comments on the publication, you must to register.