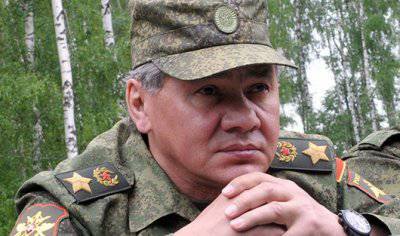 Russia decided to consolidate all the enterprises of the space industry within a single structure. Will it help? The answer to this question may be worth looking for in the military-industrial complex.


Soon a year, as Sergei Shoigu became Minister of Defense. The information sources generated by the minister, the abandonment of the footcloths, military exercises, physical training among the troops, do not yet give an idea of ​​how he is going to solve the key problem of his department, which has a direct and serious influence on the country's economy. This is a rearmament of the army, which requires a lot of money.

Many economists are skeptical of the task of rearming the Russian army, they say, no major wars threaten us in the near future, the growth of government spending has already reached a dangerous limit, their further increase is fraught with a slowdown in the economy. However, rearmament cannot be postponed - the level of technological backlog of our army becomes critical, we can no longer live with the Armed forces equipped at the level of the second half of the XNUMXth century. In this sense, the country's authorities striving to use the current peace for Russia historical period for the modernization of the Armed Forces can be understood. In addition, the rearmament of the army is one of the projects that can seriously support economic growth.

It is logical that the state defense order increased from 300 billion rubles in 2007 to 1,3 trillion rubles in the current and could exceed 2 trillion rubles a year in the second half of the decade. Nevertheless, the real success is not visible: the pace of rearmament is low, there are many questions for new developments. And all this despite the huge costs.

Why? From the beginning of 2000, with the coming to power of Vladimir Putin, the policy regarding the defense industry was built on one very important idea - centralization.

Integrated holdings that united a wide range of design bureaus and enterprises — United Aircraft Building and Shipbuilding Corporation (UAC and USC), Almaz-Antey, Rostec (former Rostekhnologii), Moscow Institute of Heating Engineering "(The manufacturer of Topol-M, Iskander, Bulava), Tactical Missile Weapons, etc.) From an economic point of view, this meant one thing - the monopolization of the military-industrial complex, and therefore a huge risk that any subsequent Elijah will turn to the army re-growth of price tags without much success in the creation and delivery of modern weapons to the troops.

Actually, the dissatisfaction of the main customer for defense industry products - the Ministry of Defense - periodically broke through in price wars against manufacturers (the loudest conflict, of course, was the confrontation with USC for the purchase of submarines), then in making decisions about purchasing military equipment abroad. However, the ex-minister Serdyukov could not do anything systematically with the growing monopolism of producers, the situation inevitably fell into the plane of personal and clan conflicts, in which Serdyukov eventually lost.
For any defense minister, the main question is what to do with the monopolies of the defense industry.

In the defense complex, it is necessary to begin work as soon as possible on analyzing the effectiveness of this model and developing an alternative.
It is not necessary to crush defense enterprises. Privatization is not a panacea either, the defense industry may remain in the hands of the state (although many manufacturers of weapons in developed countries are in private hands). However, even under state control, it is highly desirable to create several competing production and development centers. weapons. That was even in Soviet times. The result of monopolization and lack of alternatives can be not only inflated prices, but also the death of significant capital and risks to the country's defense. Let us recall the story of the acceptance of the Bulava missile, which, despite the high percentage of unsuccessful launches, was simply "dragged" - because, according to the officials of the Ministry of Defense, there was nothing to replace it with.

If Sergei Shoigu does not raise the issue of the global reversal of the policy of centralization and monopolization of the military-industrial complex with the aim of developing competition, it will face either Serdyukov’s fate (violent price wars with monopolists-producers with the prospect of losing their post), or the lot of a weak minister - a “checkbook” for all-powerful lobbyists from the defense industry. In this case, they are guaranteed to eat up huge budgets, but may well leave us without a modern army.

Ctrl Enter
Noticed oshЫbku Highlight text and press. Ctrl + Enter
We are
About Stalin and KhrushchevList of destroyed the largest and most high-tech enterprises
111 comments
Information
Dear reader, to leave comments on the publication, you must to register.